Why Calling Islam “Radical” Isn’t Enough and What Hitler and Islam Have in Common
iPatriot ^ | February 18, 2017 | Kimberly Whitford

Wait a minute. That’s not how the lyrics are supposed to go. It’s… “Five foot two, eyes of blue…but oh, what those five foot could do… has anybody seen my girl?” (Shane Fenton and The Fentones). Evidently Egyptian student Sayid Qutib saw too much of that gal and what those five feet could do when he walked into an American church dance in 1949. He wrote about the “animal-like mixing of the sexes,” to the American hit tune of “Baby it’s cold outside”… and was so disgusted by what he saw that he went on to write 24 books. He is considered by many to be the father of modern “radical” Islam…

It would be nice to believe Islam was peaceful prior to Qutib’s writings, but history shows Quran’s teachings to have been part of general Muhammad’s military strategy to forward his militant purposes. When you think about it, that doesn’t really sound so bad does it? I mean, Judeo/Christian texts show our patriarchs fighting for the promised land of Israel.

The thing is … I’m kind of suspicious of the Quran because it includes no valid genealogy, and no appropriate prophesy by which we can judge whether or not this “holy” text is truly inspired. Muhammad wore a lot of hats. Not only was he a general but he was also a merchant for 26 years.

So we’re looking at a merchant who was good at selling stuff, and who had enough contact with Jews to learn from them and unlawfully appropriated pieces of their Book the Bible. Can anyone say Copyright Infringement?

But it worked! It brought peace to an Arabic people for whom generations, tribes and towns had operated under vendetta rather than as a cohesive unit. Perhaps this is why Sharia is known as the path to peace. Muhammad did some virtuous looking things like giving to the poor and uniting his people, but he also founded a death cult of suicidal terrorists that led to generations of genocides of other people groups around the world.

Perhaps Adolph Hitler said it best,” Any violence which does not spring from a spiritual base, will be wavering and uncertain. It lacks the stability which can only rest in
a fanatical outlook.” In 2015, a group of German teachers said, an annotated edition of Adolf Hitler’s ‘Mein Kampf’ should be taught in senior high school to help ‘ inoculate ‘ teenagers AGAINST political extremism.” ( Breitbart article….emphasis mine) I wonder… if the Nazi regime had not lost the war… would ‘Mein Kampf’ be part of America’s core curriculum even as Islamic teaching has been?

Liberals are selling themselves as the next great history makers of our time. They are the ones who are looking after the “poor refugees”. They do so in groups of violent protesters whose behavior is extremely similar to previous ethnic cleansers throughout history. For me, their behavior brings to mind a scene in Fiddler on the Roof where the Russians torch the wedding of Tevye’s daughter.

We can pretend you deserve a special chapter in our children’s history books. In fact we will give it to you. It’s on page 2017… a special shout out for you… Heil Hitler.

Islam has been at war with the rest of humanity since 622 A.D.
It has always been a religion of conquest and slavery.
ISIS is practicing the religion exactly as Mohammed did and how he instructed in the Koran.
The Koran says there can be no peace until there is only Islam, everyone must submit or die.
There is no moderate Koran.
Mad Mo made it so.

Islam must be made to be as unacceptable as Nazism.

The Koran is one scary book. 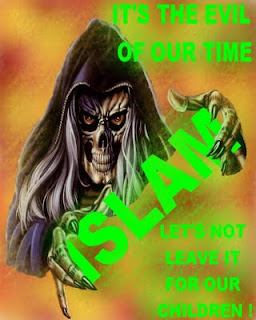 Islam kills people who attempt to leave it.

That makes it a cult.

Islam, as warlike and bloodthirsty as it was, has been hijacked by an even more anti-western and violent version, Wahhabism which powered by Saudi money, has vast influence on most of the mosques of the world.

Islam is both a religion and a political system and by its own texts, cannot long tolerate infidels.