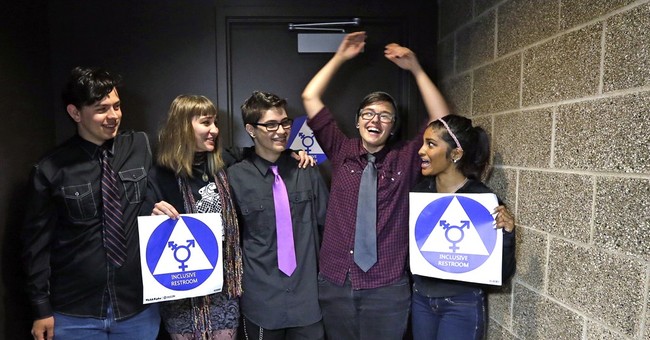 Marshall University, like many other universities, takes "rape culture" seriously. What is rape culture? According to Marshall University on its website, "Rape Culture is an environment in which rape is prevalent and in which sexual violence against women is normalized and excused in the media and popular culture. Rape culture is perpetuated through the use of misogynistic language, the objectification of women's bodies, and the glamorization of sexual violence, thereby creating a society that disregards women's rights and safety."

The editors of the leftwing Nation magazine declared "Rape culture exists because we don't believe it does." The Atlantic chronicled "Rape culture in the Alaskan wilderness." Mother Jones ran an article entitled, "How to fight fat shaming, internet trolls, and rape culture." The Huffington Post, with an article titled "Every adult should listen carefully to this teen's speech on rape culture" implored Americans to listen to Nadia Goldman, an 18 year old who, according to the Huffington Post, "dropped some serious knowledge about misogyny and sexism in a speech she made." BuzzFeed ran an article entitled "What is rape culture?" It began with a bold subheading that read "anybody can be a rapist."

Rape culture is taken so seriously by the American left that progressive pundits were quick to seize on a Rolling Stone magazine article about college rape at the University of Virginia. The journalist who wrote the article, Sabrina Erdely, documented an alleged rape at a fraternity house at the University of Virginia. When people started pointing out things in the story that did not add up, Erdely and others on the left were outraged that the claims were not believed. Now Erdely and Rolling Stone are being sued because the story did turn out to be the fabrication of Jackie, the student who supposedly was the victim of a rape that did not happen.

But, as with so much on the left, it is not the truth of the matter asserted that is important. Rather it is the seriousness of the charge that matters. Rape culture, according to the American left, is rampant in the country. The Obama Administration is committed to stamping it out.

Now, however, there is a new twist on rape culture. The Obama Administration insists that any school that accepts federal dollars allow boys to use the girls' bathroom. In a culture the left claims is filled with rapists, the left led by the Obama Administration, wants to let the rapists have free reign in bathrooms across America. If you disagree, you support Jim Crow laws according to Attorney General Loretta Lynch.

The issue, in truth, has nothing to do with actual transgender people, who are estimated to be no more than 0.3 percent of the population. If an authentically transgendered person went into a bathroom, the odds of anyone ever knowing are slim. But there is no standard definition of transgenderism. It is a feeling. If a boy suddenly decides he feels like he is a girl, he can go to the girl's bathroom.

But what of the legitimate rape victim? Suddenly, the actual victim of violence is cast in the role of bigot for not wanting a member of the opposite sex in her bathroom. In fact, the whole of transgenderism leads to absurd results that fly in the face of other accepted doctrines of the left.

For example, if, as the left claims, our sexual orientation is something we are born with and the male husband in a heterosexual relationship suddenly decides he identifies as a woman, is his female wife suddenly to be a lesbian or will she be labeled a bigot and transphobic for not wanting to stay with her husband who is now supposedly a woman?

None of it makes sense, and the Obama Administration is willing to govern based on feeling while ignoring contradictions and the concerns of others. In a nation where the left believes every man is a potential rapist, they are fine with letting him in the girls' bathroom if they feel like a girl that day. If you disagree, the Attorney General of the United States and the political left think you are a bigot.

Liberals believe women have the right to privacy... except in the bathroom.

I have had basically the same argument with a Bernie supporter I know and while she is very intelligent and very well-read, by the end of the conversation I feel like I’m in a mental institution.

Some of her Facebook friends have gotten very nasty with me because I simply asked for some hard crime statistics to back up their fanatical rape culture claims. It’s something to witness, they go completely wacko and get ugly almost beyond belief.

Liberalism is a secular religion.

Liberals are as fanatical about their dogma as Muslims.

Trying to show them they’re wrong is worse than useless - its amounts to an exercise in frustration.

And these are the folks who see themselves as open-minded.

I certainly believe that. Marshall enrollment is 16,000 students - how many have been raped? How many rape claims are made each year, and how does this compare with the past 50 years? What are they doing on their own campus to reduce the occurence of rape, e.g. improved lighting, etc?

There is no “rape culture” but there definitely is a culture of the “perpetually offended”.

Rape culture and White Privilege have a certain commonality: they’re both omnipresent, all-powerful boogeymen that only liberal social activists can see. The rest of us have to take their word for it and if we don’t, we’re bigots.

“What is rape culture?”

An imaginary problem feminists invented because most of the real problems they used to whine about have already been addressed.

i feel like a girl and then i go into the girls locker room and suddenly i stop feeling like a girl. what does that make me.

YEah, that is killing Facebook I think. I know for me, if I can’t say something offensive, I don’t have very much to say. And I’m certainly not going to say it on there where I’ll get a chorus of banshees tailing me forever more.

Those signs look like they should mean “Notice: Supercollider In Use.

Power Line blog had a post up recently that discussed the incompatibility of the Obama Administration’s dictat on transgender bathrooms, with other requirements that it has imposed on schools regarding creating safe environments for women. The prediction was that Obama and his cohorts may have driven a fatal stake into the heart of Title IX.

Rape Culture: when a guy doesn’t call a girl back

15 posted on 05/27/2016 10:15:10 AM PDT by dsrtsage (One half of all people have below average IQ. In the US the number is 54%)
[ Post Reply | Private Reply | To 9 | View Replies]
To: Kaslin
"Rape Culture is an environment in which rape is prevalent and in which sexual violence against women is normalized and excused in the media and popular culture.

And as a rape victim, what about MY ‘feelings’, my RIGHTS?

Maybe we should have a separate bathroom for victims of sexual crimes- a ‘Survivors Only’ bathroom...

Oh how I detest this “rape culture” crap- but I would be very happy to discuss this with any of these rape ‘experts’- they are clueless.

It’s the only one I’m aware of. Not that you can say that. Anyway, the world’s nuts, I’m old enough that I’m not sure I care anymore.

After 12 years in the “group-(non)+think” programming factories into lies and misinformation (when very young children they are taught contradictions can be true—2+2 can equal 5-—so they have little tribal minds when adults.)

They are indoctrinated Useful Idiots of the State to collapse Christianity (civil society/the Natural Family so that they will be “happy slaves” of the State-—their daddy and mommy since those concepts were erased in the children.)

What happens when brainwashed is that emotions always rule the person. The Intellect is destroy—all critical thinking skills ERASED (like in Inca/tribal minds-—abstract thought is impossible)..

Yuri Besmenov, the ex-KGI, stated that brainwashed people will never be able to “see the truth” of anything. They will experience such “cognitive dissonance” when Truth (God) is heard they will shut down all debate-—emotions will dominate.

It is the opposite mindset which created the Age of Reason, and the concept of Individualism (Reason/Logic/Uniqueness/thinking for self-—not a “programmed” response. Being able to judge facts, and data to come closer to Truth.

For NWO-—so they can herd and kill off the masses, they need dumb “bots’ who believe whatever nonsense comes out of the State, flike Jennar is a woman and boys can be girls. All mental illness from the Marxist infiltration and takeover of our APA to make evil, vile use of the human body “Normal”, so dehumanization can be normalized in young children and Reason and Logic can be erased (Christian Worldview impossible).

So since the liberals all believe in Rape Culture, then it doesn't exist. That is the logical extension of the above statement from the article.

These people are so shallow a heavy dew would cause flooding.