Yup. She got this one wrong.

She presumably needs the money.

Yep. Big ugly ones. I truly regret my vote for McCain, now.

What good would an endorsement be then? Do you wish that everyone who's endorsed Ted Cruz had waited until the endorsement was meaningless too?

Kudos to Mrs. Palin for recognizing the right man at the right moment.

It will be interesting to see who the “I like Sarah, but...” freepers will be supporting. 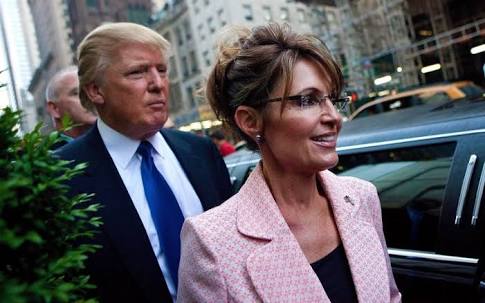 Sarah is like every one of us here on F.R. with her own opinions. I can't think of two things we all here agree on.

With that, I STILL don't particularly care for Trump.

However I will say this, People say that Cruz and Trump are similar to Ubama for a myriad of reasons.

My Response is, I certainly hope so.

I wish all of our candidates would be as successful as Ubama with our Agenda.

.. Trump can offer her a job when he loses.
BEST ANSWER! NYT thinks this will rally conservatives?
Conservatives do not support DT. They may have thought they were conservative but they aren’t. No big loss, still weeding out the chaff from the wheat.

She endorsed McCain for senate too. That worked out great.

“...will endorse” so it hasn’t happened yet. This was like when Trump annouced that he was going to annouce. He sure knows how to get a story out there and give it some hang time; I wonder how he handled asking his wives to marry him.

Mark Levin is going to faint.

Wasn’t so long ago on this site that if you said anything negative about Sarah it was zot.. But now she actually does a good thing? Phew.

Now we’ll hear about how she’s not really a conservative. /s

Ted is having a bad day.