CABOT, Pa. — Rick Santorum, the brusque and deeply conservative former senator who won nearly a dozen contests in the 2012 race for the Republican nomination, announced here Wednesday that he would seek to recapture that fleeting magic by entering a crowded primary likely to be far more difficult than the last.

I wish he would throw his support behind one of the main contenders... 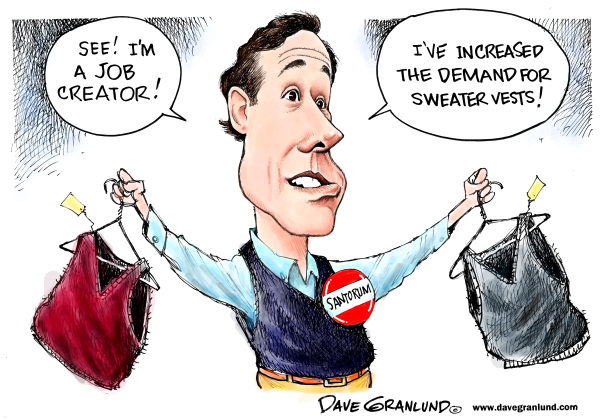 I voted for him ‘12, this time around, I am voting for Cruz!

PS: Did anyone else catch that quasi-liberaltarian fool Gutfeld mock Santorum’s position on gay marriage?

The GOP primary is nothing but a convention of maybe 4 serious candidates and 57 attention whores.

I wish he would as well, but I have always liked Rick. I’ve known him for 21 years, and he is one of the most dynamic, moving off-the-cuff speakers I’ve ever heard. I’d like to see him as Sec. of HHS. Bob

I still haven’t forgiven this nasty little prick for his behavior during the campaign last time. Not only was he an infantile— I hated how shallow he was, how absolutely devoid of ideas, how he confused standing in front of banners with the words “courageous” with actually being courageous— but he was entirely destructive to everyone else in that run.

The scumbag had no real ideas of his own, so he sat there and just tore down every one elses ideas. Then the lying prick, he even promised at one point to stop tearing down “conservatives,” but, of course, I’m still seeing his nasty bloody ads.

This guy just enters into the race and nukes everybody else— guaranteed! And this freak has no chance of actually winning. He’s unelectable. Always has been. Always will be. Who the heck wants a momma’s boy, sweater vest wearing poindexter like this wannabe?

Sorry, Santorum, but Googje is not your friend.

Sorry, Santorum, but Goggle is not your friend.

14 posted on 05/27/2015 2:50:45 PM PDT by Oliviaforever
[ Post Reply | Private Reply | To 12 | View Replies]
To: Berlin_Freeper; Whenifhow; Las Vegas Dave; Pontiac; traditional1; sauropod; kristinn; RaceBannon
He turned his back on the party, the country, and Pennsylvania by endorsing snarlin Arlin Specter, (or is it Spectre), over Pat Toomey. Specter then turns himself into a Democrat and the rest is history. Not that Toomey is that good.

In a primary he won't even carry Butler County which used to be home. Why doesn't he just go away? He is a conservative like what's her name is an Indian.

“I wish he would throw his support behind one of the main contenders...”

I wish this will be his last run for president....

Guys like this only run so that can spend campaign contributions on hotels and airfare and rack up Marriott points and frequent flier miles.

Silly comments roll off my back, thanks. lol