Politico scored a journalistic coup with its exclusive 2014 profile on Lois Lerner, the former IRS official at the center of the agency's targeting of conservative groups.

But a former Illinois lawmaker who said Politico contacted him repeatedly that year with questions regarding claims he was targeted by Lerner in the mid-1990s has been left wondering why the news group chose to ignore his documented dealings with the former federal official.

Lerner went after his 1996 Senate campaign with a lawsuit totaling $1.1 million — an enforcement action that was eventually thrown out of court — when she was working at the Federal Election Commission, according to Salvi.

"I spent something like an hour and a half talking to Politico about this," said Salvi, whose dealings with the FEC are well documented by the federal agency. "And I'm nowhere in the story. They had no intention of using anything I said."

With its Lerner profile, titled "Exclusive: Lois Lerner breaks silence," Politico became the first news group to gain access to the embattled former bureaucrat, who resigned from the Internal Revenue Service after bombshell revelations in 2013 that the IRS had singled out Tea Party and other conservative nonprofits for exceptional scrutiny and slow-walking of applications for tax exemptions.

In 1996, Salvi, a representative in the Illinois state house, ran for an open U.S. Senate seat against then-Rep. Dick Durbin, D-Ill. His campaign attracted powerful scrutiny from the Federal Election Commission's enforcement division, creating a scandal that Salvi said cost him the race.

The FEC was responding to a complaint lodged by Gary LaPaille, the Democratic Party's state chairman. And the commission's enforcement division was headed at the time by none other than Lois Lerner.

On Oct. 22, 1996, Lerner's FEC division found"reason to believe" Salvi misreported nearly $1.1 million in contributions and loans, the agency said in a court filing. Later, in an letter dated Oct. 29, 1996, addressed to Salvi's legal representative at the time, Bobby Burchfield, which shows that Salvi did have some form of contact with Lerner, the FEC announced it had closed its file against the Republican candidate.

And although the FEC's case was eventually dismissed that year on technical grounds, Salvi ended up losing to Durbin, who is now a powerful senator. Salvi continues to blame the FEC scrutiny and the negative press it brought his campaign for souring voters in the Prairie State.

"Every interview I had, the first thing people would say is: Tell us about your investigation," Salvi told the Examiner. "People thought I was going to jail!"

Later, after losing his Senate bid, Salvi announced he would run for Illinois secretary of state. But the charges of financial wrongdoing continued to dog Salvi, even after he secured the nomination of the state's Republican Party.

The longtime Republican told the Examiner this was when he came into direct contact with Lerner.

"I called [former FEC attorney] Colleen Sealander and said, 'With all due respect, I want to talk to the person who's pulling all the strings here: Lois Lerner," he said, adding that he knew her name because her signature was included on several FEC letters and court documents in his possession.

Lerner then reportedly said the following to Salvi in a phone conversation: "Look, we don't want any money. Just promise us you will not run for public office again and we'll drop it. "

Salvi said he then asked Lerner to put that in writing, which allegedly prompted her to say: "No. We don't do that."

In 1997, after it had already dropped its first case against Salvi, the FEC again charged the Republican with misreporting his 1996 campaign finances.

Salvi ignored the renewed case and ran in 1998 for Illinois secretary of state, losing out eventually to Democrat Jesse White.

The FEC's second attempt on Salvi was later dismissed in 1998 by the U.S. District Court for the Northern District of Illinois, Eastern Division, on the grounds "it was identical to a case the Commission had previously filed in the court."

But the FEC kept at it, appealing the case in 1999 to the U.S. Court of Appeals for the Seventh Circuit, trying again to charge Salvi with misreporting funds.

It didn't work: The Appeals Court Decision on March 8, 2000, "affirmed a district court order dismissing a civil enforcement action the FEC had brought against the Al Salvi for Senate Committee and its treasurer," the agency reported.

The Examiner reviewed online records of the complaints filed against Salvi at the FEC's website, as well as an FEC letter bearing Lerner's name that is still in Salvi's possession.

Not a word of Salvi's story, or the alleged attempts by Lerner's FEC enforcement division to pressure him out of politics, appeared in Politico's Lerner profile.

"I gave all of this to Politico," Salvi told the Examiner. "And I talked with [them] and I talked and I talked. I haven't been in politics for a long time, but you don't spend that much time with somebody. Everything ended up on the cutting room floor. Did they even ask her about this?"

"I told the whole story and I wasn't even mentioned in the article. ... I couldn't believe it," he said. "There were three or four lengthy telephone conversations [with] Rachael. She said I was her first interview and asked for names and numbers of people she can go to confirm."

"My first conversation was the longest — she called the law office. She would call me again when she bumped into something that needed clarification. She told me it would be a long time before the article was published," he said.

Politico declined to comment on why it had left Salvi out of its Lerner profile. Editor Marty Kady told the Examiner, "We're going to refrain from commenting specifically on your questions, other than to say we're not going to discuss our reporting and editing processes on a story that ran many months ago."

The former Republican lawmaker's story exists outside of FEC records.

In 2013, Rep. Peter Roskam, R-Ill., Salvi's former law partner and the current chairman of the Ways and Means Oversight Subcommittee, brought up Salvi's experience during a hearing on the IRS' targeting of conservative groups applying for tax-exempt status.

Following Roskam's remarks during the hearing, Salvi appeared on Fox News to repeat his charge against Lerner.

And it seems Politico is not the only news organization to ignore Salvi's story, as conservative columnist George Will recently noted.

After the IRS hearing and Salvi's Fox News appearance, the Washington Post's George Will in a 2013 column titled "Lois Lerner, the scowling face of the state," repeated the former lawmaker's story.

In another column last week, titled "Rein in the IRS," Will repeated the Salvi story, this time accusing national news organizations of ignoring the serious charge against Lerner.

"Roskam's telling of Salvi's story elicited no denial from Lerner," Will wrote. "Neither did the retelling of it in this column. ... No wonder: The story had not been deemed newsworthy by the three broadcast networks' evening news programs, by the New York Times or by the Post."

This isn't the first time that Lerner's tenure at FEC has come into question. National Review and The Weekly Standard reported in 2013 that separate parties had claimed similar political intimidation at the hands of the former IRS and FEC official.

Lerner's lawyer, William Taylor III, did not respond to the Examiner's request for comment. 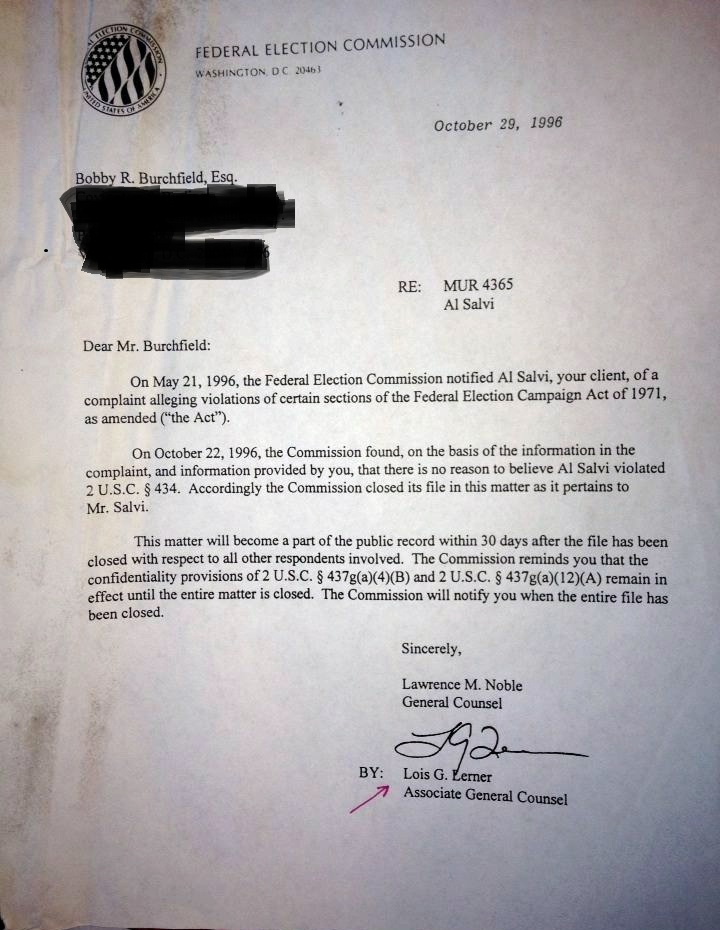 Is Lois Lerner an ATTORNEY??? Well.....that makes what she did even WORSE!!

Her husband is a partner at a DC law firm that represents clients before the IRS. Naturally, she retained her maiden name at work. I'd like to see an investigation on conflicts of interest

What is Lois’s husband’s name?

Gosh, what a surprise. Why, it's almost as if Politico is just another bunch of partisan media shills.