How to Fix It: Ending this war in Gaza begins with recognizing Hamas as a legitimate political actor
Foreign Policy ^ | 08/05/2014 | Jimmy Carter and Mary Robinson

Israelis and Palestinians are still burying their loved ones as Gaza's third war in six years continues. Since July 8, when this war began, more than 1,600 Palestinian and 65 Israeli lives have been sacrificed. Many in the world are heartbroken in the powerless certainty that more will die, that more are being killed every hour.

This tragedy results from the deliberate obstruction of a promising move toward peace in the region, when a reconciliation agreement among the Palestinian factions was announced in April. This was a major concession by Hamas, in opening Gaza to joint control under a technocratic government that did not include any Hamas members. The new government also pledged to adopt the three basic principles demanded by the Middle East Quartet comprised of the United Nations, the United States, the European Union, and Russia: nonviolence, recognition of Israel, and adherence to past agreements. Tragically, Israel rejected this opportunity for peace and has succeeded in preventing the new government's deployment in Gaza.

First, there must be at least a partial lifting of the 7-year-old sanctions and blockade that isolate the 1.8 million people in Gaza.

There must also be an opportunity for the teachers, police, and welfare and health workers on the Hamas payroll to be paid.

These necessary requirements for a human standard of living continue to be denied. Instead, Israel blocked Qatar's offer to provide funds to pay civil servants' salaries, and access to and from Gaza has been further tightened by Egypt and Israel.

When will this guy learn to shut up.

He now is the relegated to second fool status due to the O being a more articulate version of him.

And Carter fights a valiant , if futile, rear guard action to keep his long standing reputation as the worst American President in history

Jimmy Carter is such an idiot.He would think that your murderer should also be negotiated with.

Peanut poisoning of the brain... 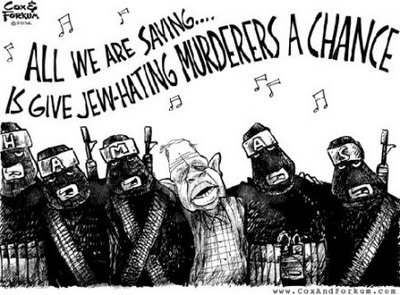 Since Jimmuh wants to legitimize a terror organization, I think he should be sent to Iraq to negotiate with ISIS and let’s see how that works out for him ..... he truly ‘deserves’ the opportunity & as far as I’m concerned, they can keep him (send the wife along, too - she’d look just terrific in a burkah).

I think Jimmah is PO’d that his title as worst president ever is being taken away from him.

It’s the only real achievement he’s ever earned.

Carter’s heretofore standing as the worst president in history was tough to beat but the destructive Obama has bested him by a considerable distance, even with Carter’s “rating advantage” of having a consistent legacy of failure and only serving one term. /sarc

He is still as wrong on everything as I remember.

Imagine the horror if Carter and CNN had been around during World War II?

Carter would be defining the war based on pity party crying for the Germans because they had more bombed buildings.