Submitted by Michael Snyder of The Economic Collapse blog,

If you have been waiting for the "global economic crisis" to begin, just open up your eyes and look around. I know that most Americans tend to ignore what happens in the rest of the world because they consider it to be "irrelevant" to their daily lives, but the truth is that the massive economic problems that are currently sweeping across Europe, Asia and South America are going to be affecting all of us here in the U.S. very soon. Sadly, most of the big news organizations in this country seem to be more concerned about the fate of Justin Bieber's wax statue in Times Square than about the horrible financial nightmare that is gripping emerging markets all over the planet. After a brief period of relative calm, we are beginning to see signs of global financial instability that are unlike anything that we have witnessed since the financial crisis of 2008. As you will see below, the problems are not just isolated to a few countries. This is truly a global phenomenon.

Over the past few years, the Federal Reserve and other global central banks have inflated an unprecedented financial bubble with their reckless money printing. Much of this "hot money" poured into emerging markets all over the world. But now that the Federal Reserve has begun "tapering" quantitative easing, investors are taking this as a sign that the party is ending. Money is being pulled out of emerging markets all over the globe at a staggering pace and this is creating a tremendous amount of financial instability. In addition, the economic problems that have been steadily growing over the past few years in established economies throughout Europe and Asia just continue to escalate. The following are 20 signs that the global economic crisis is starting to catch fire...

#1 The unemployment rate in Greece has hit a brand new record high of 28 percent.

#2 The youth unemployment rate in Greece has hit a brand new record high of 64.1 percent.

#3 The percentage of bad loans in Italy is at an all-time record high.

#4 Italian industrial output declined again in December, and the Italian government is on the verge of collapse.

#5 The number of jobseekers in France has risen for 30 of the last 32 months, and at this point it has climbed to a new all-time record high.

#6 The total number of business failures in France in 2013 was even higher than in any year during the last financial crisis.

#7 It is being projected that housing prices in Spain will fall another 10 to 15 percent as their economic depression deepens.

#8 The economic and political turmoil in Turkey is spinning out of control. The government has resorted to blasting protesters with pepper spray and water cannons in a desperate attempt to restore order.

#9 It is being estimated that the inflation rate in Argentina is now over 40 percent, and the peso is absolutely collapsing.

#10 Gangs of armed bandits are roaming the streets in Venezuela as the economic chaos in that troubled nation continues to escalate.

#11 China appears to be very serious about deleveraging. The deflationary effects of this are going to be felt all over the planet. The following is an excerpt from Ambrose Evans-Pritchard's recent article entitled "World asleep as China tightens deflationary vice"...

China's Xi Jinping has cast the die. After weighing up the unappetising choice before him for a year, he has picked the lesser of two poisons. The balance of evidence is that most powerful Chinese leader since Mao Zedong aims to prick China's $24 trillion credit bubble early in his 10-year term, rather than putting off the day of reckoning for yet another cycle. This may be well-advised for China, but the rest of the world seems remarkably nonchalant over the implications. #12 There was a significant debt default by a coal company in China last Friday...

A high-yield investment product backed by a loan to a debt-ridden coal company failed to repay investors when it matured last Friday, state media reported on Wednesday, in the latest sign of financial stress in China's shadow bank sector. #13 Japan's Nikkei stock index has already fallen by 14 percent so far in 2014. That is a massive decline in just a month and a half.

The worsening political and economic circumstances in Ukraine has prompted the Fitch Ratings agency to downgrade Ukrainian debt from B to a pre–default level CCC. This is lower than Greece, and Fitch warns of future financial instability. #15 The unemployment rate in Australia has risen to the highest level in more than 10 years.

#16 The central bank of India is in a panic over the way that Federal Reserve tapering is effecting their financial system.

#17 The effects of Federal Reserve tapering are also being felt in Thailand...

In the wake of the US Federal Reserve tapering, emerging economies with deteriorating macroeconomic figures or visible political instability are being punished by skittish markets. Thailand is drifting towards both these tendencies. #18 One of Ghana's most prominent economists says that the economy of Ghana will crash by June if something dramatic is not done.

#19 Yet another banker has mysteriously died during the prime years of his life. That makes five "suspicious banker deaths" in just the past two weeks alone.

Yes, things don't look good right now, but it is important to keep in mind that this is just the beginning.

This is just the leading edge of the next great financial storm.

The next two years (2014 and 2015) are going to represent a major "turning point" for the global economy. By the end of 2015, things are going to look far different than they do today.

As a result, we are going to get to go through another "2008-style crisis", but I believe that this next wave is going to be even worse than the previous one.

So hold on tight and get ready. We are going to be in for quite a bumpy ride.

Zero Hedge. the Debkka of finance

Geez, I’d probably have to say the roaring success of the economic turnaround seen here in the U.S. Oh, wait. I musta been dreaming. Although, I have been assured by none other than the “lyin’ king” that I’ve never had it better. Even though I didn’t do it. No, somebody else did that.

I’ve had it explained to me that the Fed’s “purchasing” has only ever been requirements that Federal Reserve Banks must purchase legitimate US bonds and mortgage securities for resale. In essence, there’s been no expansion of the monetary supply equal in any way to the amount of these pass through purchases that ultimately are purchased away from those Banks if not kept.

The concern with the above is with the mortgage securities, in which part of that pass through purchasing becomes inflationary, in my understanding.

who knows when.... but we and the world on a bad trajectory

8 posted on 02/16/2014 1:53:16 PM PST by Jane Long (While Marxists continue the fundamental transformation of the USA, progressive RINOs assist!)
[ Post Reply | Private Reply | To 1 | View Replies]
To: ConservativeMind
In essence, there’s been no expansion of the monetary supply equal in any way to the amount of these pass through purchases that ultimately are purchased away from those Banks if not kept.

It sure looks like the money base has expanded pretty rapidly to me. research.stlouisfed.org

The economy or the pace car?

This has to be one of the weakest lists I’ve seen in a while.

Numbers 1-8 are just bad European management, that has been bad for a long time and is continuing to be bad.

11-13 At least China is acting to take care of its problems early. Japan is just limping along as it has for decades.

14 Ukraine is a mess purely due to politics.

15-18 Australia, India, Thailand and Ghana. Each of them has a fairly typical problem that are different from each other.

19 Another dead banker. Maybe the world has hit “peak banker”, and we’re soon to run out of bankers.

20 The totally different market conditions graph of 1929 bear a vague similarity to a market graph today. Nobody has mentioned the distinct correlation between the stock market and the length of hems on women’s dresses for a while.

It’s neither weak nor strong. It just is.

21. US median income down 5% since 2009 and still decreasing in 2012 which is the last year that the numbers have been compiled. The economy sucks and you’d have to either be wearing blinders or be a committed leftist not to know that.

To whom or which entities is all this debt owed? Is it all bond issuances and the like? 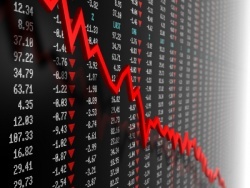