Entitled Fast Food Strikers Demand to Be Paid More Than They're Worth
Townhall.com ^ | July 30, 2013 | Neal Boortz 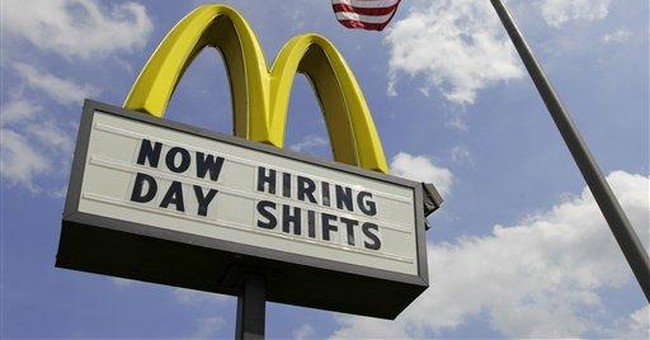 This column really is a bad idea. I should have counted to 100, had a drink, hit the treadmill for 45 minutes... something before I sat down and started writing after a segment yesterday on Neil Cavuto’s show. But I didn’t cool down. I headed straight for the computer and clicked twice on the “Word” icon – and here we go. Intemperate thoughts, sure to be considered offensive by some (like I care), are about to come your way.

Our Republic has survived a great deal. We’ve managed to get through a war with states determined to secede from the union (misnamed the “Civil War”). We survived two World Wars and a Cold War. None of those events have threatened this country nearly so much as the combined affect of millions of abysmally ignorant Americans, products of 100 years of a hideous government education and are now walking around with voter registration cards. More Americans can name Kim Kardashian’s new tricycle motor than can name our vice-president. More Americans could write a paragraph on last season’s American Idol competition than could write a single sentence on the IRS campaign against the Tea Parties. If you were offered one penny for every American who makes it a habit to watch Entertainment Tonight or a dollar for every person who reads the front section of their local newspaper, you would be an idiot to go for the newspaper readers. There are simply not enough newspaper readers to pay your next power bill, let alone wisely shepherd our country through perilous times. Bloody wars are easier to survive than idiots with ballots.

The issue on Cavuto yesterday was a few select members of the Dumb Masses protesting in New York City for something they call a “living wage.” Apparently these stupefyingly ignorant protestors thought that McDonalds should be paying burger flippers and French fry cookers $15.00 an hour, whether they’re worth it or not.

Where DO mindless people like this come from? Oh yeah. Government schools. Almost forgot.

Two of the people who showed up on Cavuto yesterday caught my jaundiced eye: a guy standing next to a young woman carrying a baby in some sort of a sling. The young woman was a McDonalds worker and she just wasn’t making enough to “provide” for her family – of two, I presume. The guy standing next to her was (a) apparently one of the organizers of this demonstration, and (b) had met this young woman during repeated – and I do mean repeated – trips to McDonalds for a bag full of Big Macs and fries, plus milk shakes .. probably every day. Maybe twice a day. Dude loved to eat.

As for the organizer --- or “activist” as the media likes to call people like this --- he just spouted on and on about “corporations” and what they owe the pore beleaguered workers. How I would have loved to ask this rocket surgeon to give me a one-sentence definition of a “corporation.” I love watching brainy people vapor lock. But in retrospect, that might not have been a good idea. You don’t want to see a head explode on TV.

Mr. Activist guy had the idea that if McDonalds would just pay these workers $15.00 an hour plus health insurance and all of the other benefits then the world would be a better place and the workers would not have to rely on the government for all of these welfare services and everyone would be better off. Nobody asked him how much a Big Meal would cost if the people preparing that culinary delight were paid $15.00 an hour plus benefits. Right now you can get a Big Meal for about $7.25 The person preparing that meal is probably making minimum wage. Boost the wage by about $6.00 per hour and what is the new cost for a Big Meal? $8.50? $10.00? More? Can all of the McDonald’s customers afford this price increase? Or do they go to other, cheaper fast food restaurants? Can McDonalds maintain their profit margin and employment level with lost sales? If not, how many $15 an hour workers do they lay off? Perhaps they would just close some stores in low-income areas altogether.

How about this question for the organizer: “Hey, sport. Tell me something. What obligation does McDonalds have to pay a worker more than that worker is worth? Are you telling me that an employer should hire someone just to pay them more than the wealth they can produce for the company out of some sense of social obligation? How long do you stay in business doing that?” Organizer dude probably would have come across with some statement about “social responsibility.” Well, guess what? If employers start to determine wages on what the employee wants instead of what that employee produces we will see a lot of boarded businesses and many more unemployed government-educated functionally illiterate Democrat voters. Wait! …… What?

And Ms. Baby-in-a-Sling protestor, you told Cavuto all about McDonalds’ responsibility to pay you your living wage. You made a point of saying that McDonalds should pay you enough to support your family. Fine. Then answer MY question. What about YOUR responsibilities? Did you not understand that you lacked the skills, job history and education necessary to make more than a minimum wage and that; therefore, you might not be in a position to shoulder the cost of an additional member of your household? Or is it your belief that all you have to do is download a child and it automatically becomes someone else’s responsibility to cover the costs? I think a valid case can be made for the proposition that one of the greatest social wrongs a person can commit is to have a baby they simply cannot afford to raise.

The bigger tragedy here, of course, is that this Cavuto segment exposed the viewers to the citizen and voter mentality that can lead to someone like Obama in the White House “leading” our nation ….. from behind, of course.

Truthful, and to the point.

The “Gimme, Gimme” segment lines up for yet another “Gimme”. Idiots!!

I don't want some disgruntled McDonald's employees spitting in my hamburger and my drink.

7 posted on 07/30/2013 5:49:41 AM PDT by EEGator
[ Post Reply | Private Reply | To 2 | View Replies]
To: Kaslin
These fast food beggars are really pissing me off. There's so much turnover in the industry that if you show up for your shift on time and hustle, you'll be promoted to a leadership position within a couple of months. Within two years (if not sooner) you're a shift manager making well above minimum wage. Admittedly, still a pretty crappy job considering your employees and not so great pay, but it's a damn sight better than 7 bucks an hour. Put in your time in management and then you can get the hell out of McDonalds and head over to Pizza Hut, after that you may need a college degree, but you'll have the skills to be an assistant manager at an OUtback. And if you do that job well you can go on to be a full manager and eventually a district manager for that excellent corporation. And it all starts with "do you want fries with that?"

Lazy, shiftless bastards. And I have news for the baby's mother. The last thing she wants is 15 bucks an hour. She'll lose her WIC and free healthcare for her baby. She's better off at minimum wage. Just don't work to hard, or she'll be promoted and lose her government bennies.

And uttering "that's for Trayvon."

I avoid fast food entirely since the Zimmerman trial ended.

“is it your belief that all you have to do is download a child and it automatically becomes someone else’s responsibility to cover the costs?”

Sounds like my step daughter...no education, no skills, no job, no husband but a parent.

The New York franchises ought to raise their wage to $25/hour, then lay off all those they can’t afford at that rate.

Trying to reason with a democrat is a useless endeavor....that’s why I simply stopped associating with them at all. I don’t feel anything friendly about a group of stupid ass people who think the government is around to give them free sh#t and businesses are around to furnish jobs to morons!!!

Should a McDonald’s employee in NYC make the same as a McD employee in El Paso, TX? Quite a stark difference in cost of living between the two places. But currently, beginning employees make the same in both places.

th sisimplistic solution would be to close down entirely. let people a)do without the service, and b) the employees will get 0% of a lot, which, to a lib, is better then 100% of something...

15 posted on 07/30/2013 6:00:21 AM PDT by camle (keep an open mind and someone will fill it full of something for you)
[ Post Reply | Private Reply | To 1 | View Replies]
To: old and tired
This will inspire some entrepreneur / inventor to come up with an automated process to make and dispense fast-food to order. You then will pay at the window with credit, debit, EBT, or cash and your food comes out the chute, untouched by human hands. No more fast-food workers, just someone to load the bins and clean them at closing...

As somebody notable once said, what difference does it make?

I just wish there had been fast food jobs when I was a teen, when the minimum wag was about $1 an hour, I would have relished that extra spending money to buy gas for my old jalopy.

Of course, once I got grown and kids came along, I got educated and got more substantial jobs to live up to my responsibilities as a husband and parent. But that was before the social justice crowd made a cottage industry out of having babies for fun and profit.

Remember when Pelosi and the Dems snarked at Bush for creating “McJobs”?

In the Era of Baraq, fast food is the new career path intended to support the mythical “family of four” in a middle class lifestyle.