WASHINGTON – Members of the Senate Judiciary Committee expressed concern on Wednesday about the domestic use of drones, saying the often-tiny, unmanned flying devices could carry undesirable consequences regarding the right to privacy.

Republicans and Democrats acknowledged that drones offer law enforcement a potentially valuable tool that could even be used by farmers to survey their acreage at a relatively inexpensive cost.

But the device, also known as a UAS, an acronym for unmanned aircraft system, also has the ability to travel nearly undetected into areas where it is unwanted – people’s homes or businesses – and record private information, making it seem like something out of 1984, a novel by George Orwell.

“While there may be many valuable uses for this new technology, the use of unmanned aircraft raises serious concerns about the impact on the constitutional and privacy rights of American citizens,” said Sen. Patrick Leahy (D-Vt.), the committee chairman.

That view was supported by Sen. Chuck Grassley (R-Iowa), the ranking member, who said using drones to essentially spy on people without their knowledge is “contrary to the notion of what it means to live in a free society.”

“We need to make sure we have sufficient legal safeguards to promote innovation while protect the general public,” Grassley said.

The drones in question differ markedly from the unmanned airplanes used so extensively by the American military for surveillance and combat operations overseas. They are smaller, lightweight, and, like their military cousins, unmanned. The Federal Aviation Administration estimates that as many as 30,000 drones will be operating in American airspace by the end of the decade.

One UAS under development reportedly would be the size of a mosquito.

The domestic use of drones provides a dilemma for lawmakers. The device already has proved its worth.

The Department of Homeland Security, through Customs and Border Protection, already operates modified, unarmed drones to patrol rural parts of the nation’s borders. They also are being used to support drug-interdiction efforts by various law-enforcement agencies.

Benjamin Miller, the Unmanned Aircraft Program manager for the Mesa County, Colo., Sheriff’s Office, told the panel that his office maintains two small, battery-operated unmanned aircraft systems – a Draganflyer X6, a backpack-sized helicopter that can fly for 15 minutes, and a Falcon UAV, an airplane that can fly for an hour and fits in the trunk of a car. Both are fitted with cameras.

The drones have flown 185 hours in just over 40 missions over the past four years on two small batteries. They have been used to provide a vital view of a church fire, locate the body of a missing woman, and conduct an aerial survey of the county landfill to determine the increase in waste over the previous year – a task that once cost almost $10,000 which was completed at a cost of $200 by the drone.

“While unmanned aircraft cannot recover a stranded motorist in a swollen river, they can provide an aerial view for a fraction of the cost of manned aviation,” Miller said. “I estimate unmanned aircraft can complete 30 percent of the missions of manned aviation for two percent of the cost. The Mesa County Sheriff’s Office projects direct cost of unmanned flight at just $25 an hour as compared to the cost of manned aviation that can range from $250 to thousands of dollars per hour. It actually costs just one cent to charge a flight battery for either of our systems.”

Michael Toscano, president and CEO of the Association for Unmanned Vehicles Systems International, added that drones have been used to assess the flooding of the Red River in the upper Midwest, battle California wildfires and are being used to study everything from hurricanes in the Gulf of Mexico, tornadoes in the Great Plains, and volcanoes in Hawaii.

“Unlike military UAS, the systems most likely to be used by public safety agencies are small systems, many weighing less than five pounds, with limited flight duration,” Toscano said. “As for weaponization, it is a non-starter. The FAA prohibits deploying weapons on civil aircraft.”

But the low cost and compact nature of drones make them a perfect device for surveillance, raising significant Fourth Amendment questions. Amie Stepanovich, director of the Domestic Surveillance Project at the Electronic Privacy Information Center, noted that drones can “be equipped with sophisticated surveillance technology that makes it possible to spy on individuals on the ground.”

While her organization recognizes that drones provide “many positive applications,” they can also be used to obtain evidence in a criminal proceeding, intrude on a reasonable expectation of privacy, and gather personal data.

“Rules are necessary to ensure that fundamental standards for fairness, privacy and accountability are preserved,” she said. “The technology in use today is far more sophisticated than most people understand. Cameras used to outfit drones are among the highest definition cameras available. The Argus camera…has a resolution of 1.8 gigapixels and is capable of observing objects as small as six inches in detail from a height of 17,000 feet. On some drones, sensors can track up to 65 different targets across a distance of 65 square miles. Drones may also carry infrared cameras, heat sensors, GPS sensors that detect movement and automated license plate readers.”

The U.S. Supreme Court hasn’t considered the limits of drone surveillance under the Fourth Amendment. Twenty years ago the justices determined that law enforcement could conduct manned aerial surveillance from as low as 400 feet without a warrant. There is no federal statute providing safeguards to protect privacy against increased drone use, although Congress has directed the FAA to come up with a plan to integrate UAS into the domestic airspace.

“Accordingly, there are substantial legal and constitutional issues involved in the deployment of aerial drones by law enforcement and state and federal agencies that need to be addressed,” Stepanovich said.

Ryan Calo, an assistant professor at the University of Washington School of Law, noted that drones “have a lot of people worried about privacy — and for good reason.”

“Drones drive down the cost of aerial surveillance to worrisome levels,” he said. “Unlike fixed cameras, drones need not rely on public infrastructure or private partnerships. And they can be equipped not only with video cameras and microphones, but also the capability to sense heat patterns, chemical signatures or the presence of a concealed firearm. American privacy law, meanwhile, places few limits on aerial surveillance.”

The American public, Calo said, enjoys “next to no expectation of privacy in public” and the Supreme Court has made it clear that law enforcement doesn’t need a warrant “to peer into your backyard.”

“I see no reason why these precedents would not extend readily to drones,” he said. 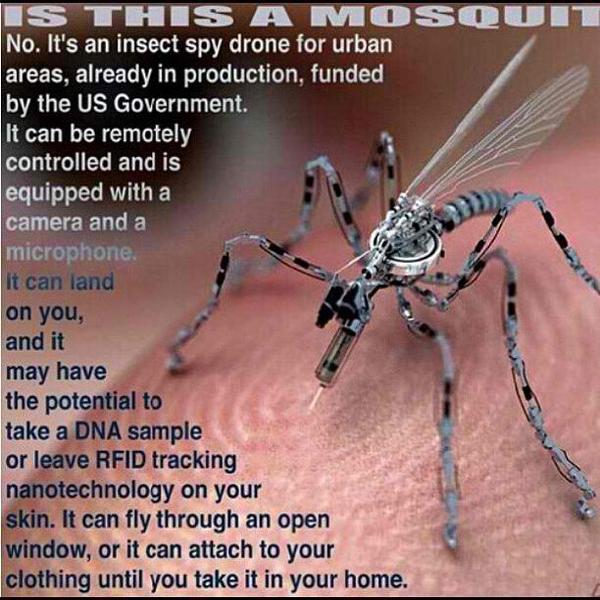 Note to self: Get smaller shotgun loads. Sand-size.

We’re all going to need rf blocking devices in our homes and properties to thwart this.

Stock up on electric fly swatters.

Seriously, do we have to put up nets around our property now?

They will probably fly in multiples, some of which can cut ordinary netting and other types of screens.

Wait till this is ‘commonly available’ technology in 10 years. And the crazy people get them.

And the terrorists. These look perfect for spreading a pandemic weaponized microbe. Instead of a few patient zeros showing up in the ER’s, there might be hundreds of thousands of patient zeros.

If we’re getting pics of them the Chinese probably already have the plans and tech. Which means it’s probably for sale to the highest bidder already.

Now, here’s a useful way for me to get the shark...

9s are a good place to start.

Where’s Hank and Roy Spim when we need them?

At some point, these things (in fiction, anyway) tend to build a world in which the concept of government has no place at all.
Just one example: “The Diamond Age” by Neil Stephenson. Nanotechnology, post-scarcity economy, no real cash, the concept of government replaced by Distributed Republics which are not based on territory but are more like club memberships with mutual support agreements for people who are “citizens” of the club.

Interesting world coming our way — and I’m not sure people like Reid, Pelosi or Obama will have any role to play at all.

It won’t just be the government playing with drones.

Ordinary people will have drones.... just consider the possibilities.

Even if a drone is intercepted and examined...who made it? who was operating it? What data did it send back to them? Has it been used before and we just didn’t detect it???

Well if they start flying over my property within shotgun range I’m going to exercise the air rights that came with the purchase of the property and blow the little devils to kingdom come.

Stock up on electric fly swatters.

Seriously, do we have to put up nets around our property now?


This is one of the risks associated with unlimited technological growth. And this will NOT end well.

It will only take one crazy with a weaponized microbe and there won’t be very many people in *any* republic at all.

Don’t think the elites haven’t been drooling over this possibility for the past 100 years or more.

And their families will have been innoculated against the weaponized microbe. Yours? not so much with that protection.

How do you protect a military base against these. Even over and above the spying potential. From heaven only knows who, only 10 or 20 could cause havoc if they carried a microbe, or even small amounts of highly radioactive substances.

And restraining orders and registered sex offender lists become meaningless with these as well. Imagine these in the hands of a thrill killer. Like Lanza. Or Holmes, who we now find out was possibly a muzzie all along.

The bugzapper and fly swatter comments are entertaining but only because the public hasn’t grasped the complete potential of these.

Know how easy it is for your computer to get infected with malware when you surf the net? Imagine that computer is YOU and the malware gets loaded when you go to the mall or grocery store. Tracking devices, poisons, microbes, you name it.

You won’t even know they’re there. How would you tell the difference between one of these and a really big *real* mosquito? Are you gonna waste buckshot shooting every mosquito in Georgia?

What about when you’re asleep? And the ones that will attach to your clothing while you’re unloading the groceries from the car?