At a news conference Tuesday in Phoenix that will be live-streamed by WND, Sheriff Joe Arpaio and his Cold Case Posse will present “indisputable proof” the Obama birth document released by the White House is a forgery, according to the posse’s lead investigator.

Mike Zullo said the new information was developed during an investigative trip to Hawaii in May.

The press conference will be held Tuesday at 5:30 p.m. Eastern Time at the Maricopa County Sheriff’s Office. [Local time will be 2:30 p.m., as Arizona does not observe Daylight Saving Time].

Three weeks after the March 1 press conference, Arpaio said there would be “tons” more potentially shocking information on Obama in connection with his probe into the president’s eligibility.

I hope the audio and video for this press conference is better than the last one!


Here's a couple of posts that have the little FogDUmbs (TheFogBow.com) panties in twists. LoL.

Word is Zullo has his hands on 'missing page 11' of the divorce record between Barack Sr and Stanley Ann Dunham."

"We don't know what was on that page. Also don't forget we don't know what the 'whistle-blower' that worked at the Hawaii Dept of Health has to say. Whatever they have to present suppose to be simply 'breathtaking' they are alleging."

I keep reading announcements from the posse that shocking evidence is about to be released. I think I will stop holding my breath.

Say your prayers for the safety of all.

what’s the whistle blower story? I haven’t heard about this person. It’s not the guy that worked there in 08, is it?

Seems logical that someone who authored an “autobiography” filled with composites to embellish his existence would author a composite LFBC.

Let’s see if Sheriff Joe got some solid evidence from the purported WND mole inside the HDOH. 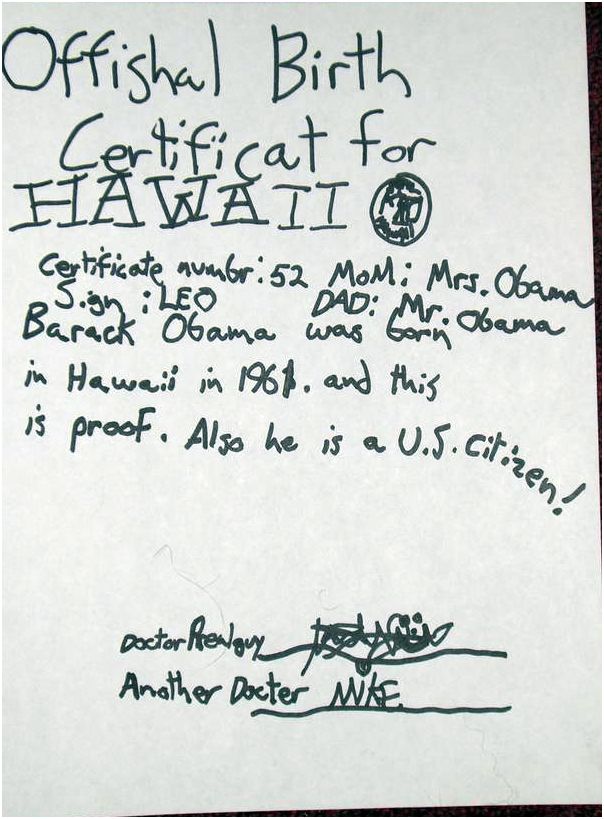 It looks real to me.

The Arpaio Posse presser has been scheduled now for about 30 days for tomorrow.

Exactly. They’ve been saying that same silly BS since 2007. “No. Really this time. We promise!”

And we wonder why the GOP elite don’t take us seriously.

16 posted on 07/16/2012 5:21:36 PM PDT by RIghtwardHo
[ Post Reply | Private Reply | To 6 | View Replies]
To: Red Steel
Cold Case Posse will present “indisputable proof” the Obama birth document released by the White House is a forgery, according to the posse’s lead investigator.

Is it a felony
to present a forgery
for a birth certificate ??

The one digits in the serial number have inconsistent serifs even when considering the varying sampling/reproduction characteristics of the individual digits. If I recall, the one digits are also pitched in a manner inconsistent with wheels mounted on the same spindle, and molded from the same die.

The document seems to be a spoof more than an actual forgery attempt. Nonetheless, I am curious about how is was produced, and if there’s a reasonable explanation for the serial number anomalies.

You’re a fraud just like the fraud in chief. Arpaio, Corsi, et al, have done a fantastic job of exposing FORGERIES and FELONIES. And people like you dismiss it because...why? I’ll tell you why; you’re a liberal and you’re afraid the jig is finally up.

“Is it a felony
to present a forgery
for a birth certificate ??”

It may be, but certain flavors of folks are immune from prosecution under this regime.