The man at the center of the Guardians of the free Republics is Texas talk-show host Sam Kennedy – and he's already gotten a Texas radio station in hot water as law enforcement reacted rapidly to what has been construed as a direct threat to all 50 US governors.

Mr. Kennedy "is the focal point of this, these guardians. He was in the mix in setting this whole thing up, and he's up to his eyeballs in this Restore America project," says John Stadtmiller, who runs Republic Broadcasting Network based in Round Rock, Texas, which broadcasts Kennedy's weekly "Take No Prisoners" show. Restore America project, as articulated on the Guardians of the free Republics website, is part screed, part call to action to depose an illegitimate government in favor of restoring the people's "common law."

The website describes it as "a war college restoration strategy for regaining control [of government in the states] quietly, efficiently and quickly without provoking controversy, ridicule, violence or civil war." It purports to have military backing for a takeover.

On Friday afternoon, Mr. Stadtmiller, reached by phone, said, "I talked to Kennedy a half-hour ago and ... I told him I'm getting a lot of heat, that you stirred the pot here, and that your plan for how to deal with the media and let them know what is going on has failed miserably."

The FBI interviewed Kennedy for two hours Friday but did not arrest him, Stadtmiller says. The interview focused on two shows Kennedy did two months ago about the Restore America project, in which Kennedy set a March 31 deadline as the day we "begin to reclaim the continent." The letters mailed to the governors were part of that plan, confirms Stadtmiller.(continued)

TOPICS: Constitution/Conservatism; Extended News; Government; Philosophy
KEYWORDS: 20100331; gfr; grandjuries; lping; obama; politics; reichstaggers; restoreamerica; restoreamericaproj; talkradio Navigation: use the links below to view more comments.
first 1-20, 21-40, 41 next last
So only the Left can have their fringe individuals, but if it looks conservative, swoop down on it? I've seen hundreds of posters, signs, blogs and posts threatening President Bush, but never heard of any FBI follow-through, have you? Heck, they even made a MOVIE about his death!!
1 posted on 04/02/2010 3:11:35 PM PDT by 2ndDivisionVet
[ Post Reply | Private Reply | View Replies]
To: 2ndDivisionVet
as articulated on the Guardians of the free Republics website, is part screed, part call to action to depose an illegitimate government in favor of restoring the people's "common law."

I wish these whackos had chosen a different name....too close for comfort, IIYWIM.

I noticed the line “they fear the broad call for removing top state officials could inspire others to act out violently.”

Does this mean a bumper sticker of “Impeach Obama” is assumed to provoke others to assassinate the SOB? The assumption that all dissent, even when it is explicitly a “vote out of office / impeach / recall” through legitimate and legal means, is a criminalization of all dissent.

This document, some 78 pages in length is a declaration of intent. It is a petition of grievances that is articulated as a right in our Constitutions both fed and state.

It is signed and it is legal in my layman's opinion.

It's a first move and a dramatic example of the way things were once done before the Federal Government became so damned intrusive.

Best of all, it drives the libs crazy!

Interesting name - so far, I don’t see them calling for violence so it sounds like a non-issue except for in the feverish minds of 0bama and his masters and minions.

5 posted on 04/02/2010 3:52:31 PM PDT by Chi-townChief
[ Post Reply | Private Reply | To 1 | View Replies]
To: 2ndDivisionVet
The FBI has not released the letters. The bureau said they contain no direct threat but asserted that their implied threat to governors could serve to spark lone-wolf violence.

So, something seen as an "implied threat" (who determines that?) might cause a loony tune to act in some way. Where was the FBI when all the sh*t about Bush being the biggest terrorist (BTW, where is Scott Ritter now?) and being burned in effigy was going down? That was free speech, but this isn't? And for the record, IMO, Guardians of the free Republics are Ron Paul type nuts, but even they are entitled to free speech.

A small sample of the LEFT HATE, smears and threats against Republicans that NEVER MADE THE EVENING NEWS (and never will)... 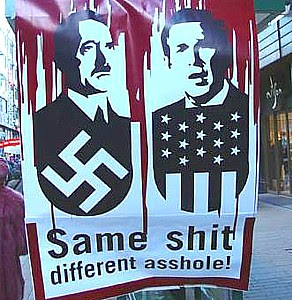 They have other websites. CopperCards for instance.

no implied threats in those pics huh?

You might be the “whacko” sitting in your easy chair too comfortable with the status quo.

“So only the Left can have their fringe individuals, but if it looks conservative, swoop down on it?”

Has anyone heard John “Obama would make a fine president” McCain condemn this leftist tactic against the Tea Party, etc??

MUST SEE!! The ‘Flush the John’ Song has gone viral and is on YOU TUBE! Exposes the REAL John McCain.

You made those up. /s

WASHINGTON — Governors across the country said Friday that they had received letters from an extremist group warning that that they might be forcibly removed from office if they did not step down within three days.

Officials from the Federal Bureau of Investigation and the Department of Homeland Security confirmed that they had sent out an intelligence note with information about potential threats made to governors by a group calling itself.....

As a long time poster, let’s don’t get banned over something as mundane as this.