I'm wondering whether there's anyone out there with the guts to pretend that it's insignificant that President Barack Obama keeps appointing radical after radical to his czar positions. Can anyone honestly say Obama's appointments don't tell us a great deal about Obama himself -- as if we needed any further proof he is a left-wing extremist?

I don't need to make a list of his radical appointees and detail proof of their extremism. Anyone paying attention knows it's irrefutably true that this has become a deliberate pattern. Statistically, Obama couldn't accidentally appoint this many radicals in two political lifetimes. Is he rubbing these people in our faces or just surrounding himself with like-minded soul mates -- or both?

My educated guess is "both" because his general attitude toward governance has been utterly dictatorial. He knows what's best for America -- the type of America he envisions, anyway -- and he will proceed to implement it, full well knowing that he's violating the will of the majority every step of the way.

It's truly sad to me that our federal government has expanded to the point that no one flinches at the thought that we need some federal bureaucrat in charge of making our local schools indoctrination facilities for homosexuality, er, safe.

As you know, Obama appointed known homosexual activist Kevin Jennings for the position.

Why would Obama, a self-professed Christian, choose Jennings, who admitted in his 2006 memoirs that he harbored a deep-seated hatred for God and religious believers at the time he embraced a homosexual lifestyle?

Jennings wrote: "Before, I was the one who was failing God; now I decided He was the one who had failed me. ... I decided I had done nothing wrong: He had, by promising to 'set you free' and never delivering on His promise. What had He done for me, other than make me feel shame and guilt? Squat. Screw you, buddy -- I don't need you around anymore, I decided."

Jennings may have since modified his beliefs, but it's still clear that he hates Christian conservatives. LifeSiteNews.com reports that he told fellow homosexual activists in 2000 that members of the "religious right" were "hard-core bigots" who should "drop dead." He said he really wanted to tell them, "F--- you!"

He was also on the advisory board for a 2001 PBS documentary "that slammed" the Boy Scouts of America for its policy of excluding homosexuals from membership. This video was then promoted at gay pride conventions to galvanize homosexuals against the Scouts.

If Obama were truly God-fearing, would he rub God's nose in this appointment?

Jennings supposedly denied he knew GLSEN was engaging in these presentations. But the witness said, "This whole conference was his dream and his mindset. This was his vision from the very beginning." Indeed, Page 8 of the conference schedule contains an entry describing the "youth-only" workshop, called "What They Didn't Tell You About Queer Sex and Sexuality in Health Class."

Jennings is the one who, as a teacher at Concord Academy in Massachusetts, failed to report the homosexual statutory rape of a high-school sophomore to the administration or the police. He just wanted to make sure the boy was wearing a condom.

Jennings is also the man who admits to being inspired by Harry Hay, a homosexual activist and promoter of pedophilia. Hay once said: "If the parents and friends of gays are truly friends of gays, they would know from their gay kids that the relationship with an older man is precisely what 13-, 14- and 15-year-old kids need more than anything else in the world. And they would be welcoming this and welcoming the opportunity for young gay kids to have the kind of experience that they would need."

Yes, Jennings admired this guy. And Obama, in turn, apparently admires Jennings and wants him to influence all the nation's children.

There's still much more, but you get the picture. How many of you believe this appointment has to do with promoting safe schools, as opposed to propagandizing for the normalization of homosexuality?

-- Mr. Limbaugh is a nationally syndicated columnist and author of Bankrupt: The Moral and Intellectual Bankruptcy of Today's Democratic Party, Absolute Power and Persecution.

I had not seen pictures of the up your alley festival in SF before last year.

This is what Jennings has to support more of, is it not? The queering of America?

And I thought the Clinton administration was the worst we could get.

So, Obama appoints the founder of GLSEN to head up “Safe Schools” efforts at the Department of Education.

Jennings is a vicious, anti-religious bigot who once said “[F–k] ‘em” to the “Religious Right.”

He supports promoting homosexuality and gender confusion as normative to even young students.

He made that comment in a New York City church.

young boys, and lots of ‘em.

Addressing a church audience on March 20, 2000 in New York City — just days before “Fistgate” — GLSEN Executive Director Kevin Jennings offered a stinging (and quite intolerant) assessment of how to deal with religious conservatives:

“Twenty percent of people are hard-core fair-minded [pro-homosexual] people. Twenty percent are hard-core [anti-homosexual] bigots. We need to ignore the hard-core bigots, get more of the hard-core fair-minded people to speak up, and we’ll pull that 60 percent [of people in the middle] over to our side. That’s really what I think our strategy has to be. We have to quit being afraid of the religious right. We also have to quit — I’m trying to find a way to say this. I’m trying not to say, ‘[F---] ‘em!’ which is what I want to say, because I don’t care what they think! [audience laughter] Drop dead!” — Jennings speech to Marble Collegiate Church, March 20, 2000.

(It should be noted that GLSEN and Jennings make heavy use of the words “respect” and “tolerance” in their public rhetoric and in descriptions of their programs.) [GLSEN's also sponsors a "No Name Calling Week," which includes "No Dissing" in its advice to kids as part of a school-based program to "eliminate bullying."]

Although Jennings has employed manipulative methods that exaggerate homosexual victimhood to advance his pro-”gay” agenda in schools, he has occasionally been frank about GLSEN’s real agenda:

“I’d like five years from now for most Americans when they hear the word GLSEN to think, “Ooh, that’s good for kids.” Sane people keep the world the same [sh---y] old way it is now. It’s the [crazy] people who think, “No, I can envision a day when straight people say, ‘So what if you’re promoting homosexuality?’ or [when] straight kids say, ‘Hey, why don’t you and your boyfriend come over before you go to the prom and try your tuxes on at my house?’” [I]f we believe that can happen, we can make it happen. The only thing that will stop us is our lack of faith that we can make it happen. That is our mission from this day forward.” — Jennings comments October 25, 1997 at GLSEN’s Mid-Atlantic conference in New York City, Lambda Report on Homosexuality [conservative publication published by Peter LaBarbera that preceded Americans For Truth About Homosexuality], January/February 1998, “GLSEN’s Jennings: ‘That Is Our Mission from this Day Forward,” page 5, Brian Burt, reporting.

Kevin Jennings is the founder and former executive director of the Gay, Lesbian, and Straight Education Network (GLSEN), an organization that works to make schools safe for all students, regardless of sexual orientation or gender identity. Prior to his tenure at GLSEN, Jennings served as History Department chair and a history teacher at Concord Academy in Massachusetts and before that as a history teacher at Moses Brown School in Rhode Island. Jennings has also authored six books including Mama’s Boy, Preacher’s Son: A Memoir which was named a 2007 Book of Honor by the American Library Association and Telling Tales Out of School which was the winner of the 1998 Lambda Literary Award. Jennings received an A.B. in history from Harvard, an M.A. from the Columbia University Teachers College and an M.B.A. from NYU’s Stern School of Business.

6 posted on 12/20/2009 9:17:19 PM PST by SeekAndFind
[ Post Reply | Private Reply | To 3 | View Replies]
To: SeekAndFind
"Before, I was the one who was failing God; now I decided He was the one who had failed me. ... I decided I had done nothing wrong: He had, by promising to 'set you free' and never delivering on His promise. What had He done for me, other than make me feel shame and guilt? Squat. Screw you, buddy -- I don't need you around anymore, I decided."

Eternity, on the other hand, is forever and that's a very, very long time.

The church is the famous Marble Collegiate Church. It was founded in 1628, is the oldest continuous Protestant congregation in North America. It is located at Fifth Avenue and Twenty-Ninth Street in New York City, and is part of the Reformed Church in America. The congregation has been a spiritual home to numerous well-known New Yorkers, and welcomes guests from all over the world every Sunday. Its worship services are seen live internationally on the World Wide Web.

If you have read the book -- THE POWER OF POSITIVE THINKING by Norman Vincent Peale, you would be interested in knowing that he used to be the pastor of this church from 1932-1984.

9 posted on 12/20/2009 9:24:44 PM PST by SeekAndFind
[ Post Reply | Private Reply | To 7 | View Replies]
To: Graybeard58
Pictures of the historic THE MARBLE COLLEGIATE CHURCH in New York City where Homosexuality is now considered acceptable. This church invited Kevin Jennings to speak. 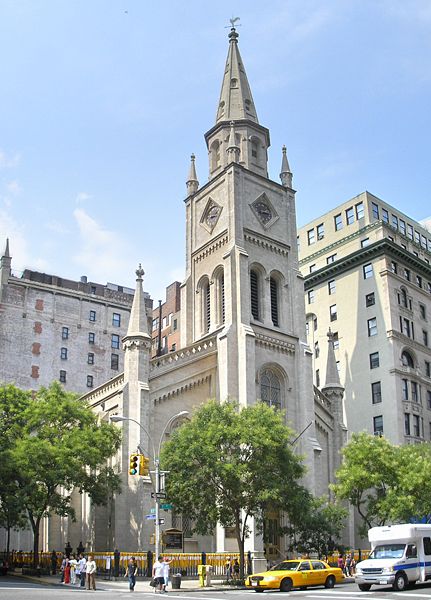 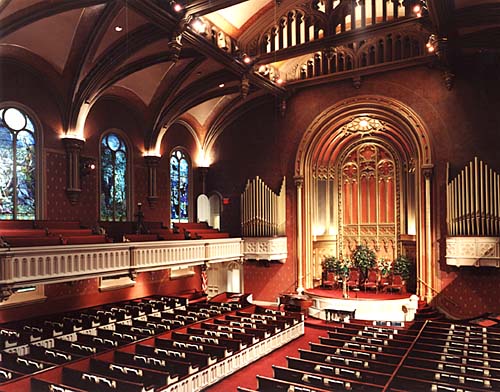 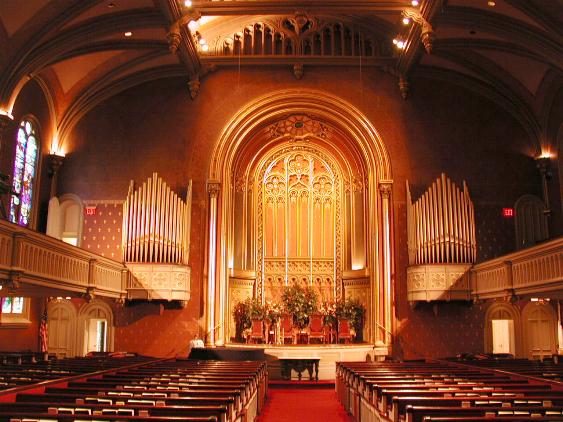 It’s bad enough to have to put up with Leftist retardation, and arrogance, much less an arrogant Leftist queers self righteousness.

He and his ilk should be in jail for indoctrinating those youth his life has touched thus far, and Obama and his crowd should be headed towards that same incarceration for instilling these perverts into the positions to effect our youth in the manner they prescribe.

These are enemies of our Nation, not opposition.

And then there’s this:

LESBIAN, GAY, BISEXUAL, AND TRANSGENDER PRIDE MONTH, 2009
- - - - - - -
BY THE PRESIDENT OF THE UNITED STATES OF AMERICA
A PROCLAMATION

And which reliable source tells us that Obama is bi-sexual ? I'm not a fan of his but please, let's try to provide some solid evidence.
14 posted on 12/20/2009 10:00:04 PM PST by SeekAndFind
[ Post Reply | Private Reply | To 12 | View Replies]
To: SeekAndFind
Jennings wrote: “Before, I was the one who was failing God; now I decided He was the one who had failed me. ... I decided I had done nothing wrong: He had, by promising to ‘set you free’ and never delivering on His promise. What had He done for me, other than make me feel shame and guilt? Squat. Screw you, buddy — I don't need you around anymore, I decided.”

Nine times he references himself in a single paragraph. Narcissism is evil.

Imagine that: an acolyte of an apostate sect advocating immoral and forbidden acts.

What was that, Mr. Luther? John Calvin, your response?

The Word of G_d is still unchanged. Why did your “gospels” do so?

Reminder: The command staff of Hitler's Brownshirts (the SA, or Sturmabteilung) were all like this guy. Homosexual, pederastic, and sadistic. Their commander, Ernst Roehm, was the worst, and he used the Hitler Youth as his private seraglio. They all did.

..another one of those...because we need to know.

They call us Tea Baggers but they are Fisters.

He’s a parvert and a genetic defective. The sooner one of his Sado-Pycho killer boy toys sews his detached genitals into his own mouth, the better.