Oct. 20: President Obama shakes hands
with Capt. John Poindexter in the Rose
Garden of the White House in Washington.

For Army Capt. John Poindexter, being awarded the Presidential Unit Citation for heroism Tuesday marked an "opportunity to close a chapter" in his life.

"The general feeling is a pretty intense level of excitement," Poindexter told Foxnews.com just before he and 85 other Vietnam veterans were honored at a ceremony in the White House Rose Garden.

"It will mean to me that I've filled an important duty to the men who I literally owe my life to, men who supported me in a desperate battle 40 years ago in the jungles along the Cambodian border."

Poindexter, 65, was one of 86 veterans of Troop A, 1st Squadron of the 11th Armored Calvary Regiment who were honored for defining the meaning of "bravery and heroism," President Obama said.

"As these men will you tell you themselves, this isn't the story of a battle that changed the course of a war," Obama said. "It never had a name, like Tet or Hue or Khe Sanh. It never made the papers back home. But like countless battles, known and unknown, it is a proud chapter in the story of the American soldier."

The group volunteered to rescue an American infantry company surrounded by enemy forces on the Cambodian border on March 26, 1970. ..."

For historical reference, this was 3 weeks after members of Obama's pals', Bill Ayers and Bernardine Dohrn's, Weather Underground accidentally blew themselves up in a New York City townhouse while preparing to bomb a military facility at Fort Dix, NJ. 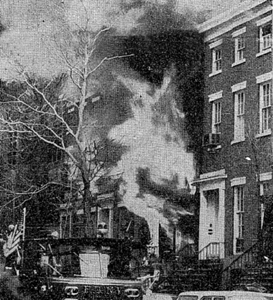 On July 23, 1970, a federal grand jury in Detroit indicted 13 members of the Weatherman group, including Dohrn, accusing them of conspiring, in the words of a U.S. Senate committee report, “to build a nationwide revolutionary network to bomb and kill.” Nearly three months later she was added to the FBI’s most wanted fugitives.

She was on the lam, but still waging war on “Amerika.”

On Nov. 30, 1970, she sent another billet-doux to her country via the Associated Press.

“In retaliation for the commando raid and bombing of North Vietnam, attacks will be carried out on pigs [police], military and governmental buildings and agents without warning. ...

The U.S. aggressors will be punished here and in Vietnam. All power to the people.”

"As a gesture of solidarity, the Vietnamese who [Bernardine] Dohrn met in Budapest presented her with a ring made from an American aircraft shot down over North Vietnam. Bill Ayers would receive a similar ring while meeting with Vietnamese communists in Toronto. He later recalled being so moved by the gesture that he 'left the room to cry.' "

'Guilty as hell, free as a bird—America is a great country,' he [Ayers] said."
August 2001, Chicago Magazine (article: No Regrets)
http://www.chicagomag.com/Chicago-Magazine/August-2001/No-Regrets/

"This is a guy who lives in my neighborhood, who's a professor of English..."
--B.H. Obama

"It was at the Chicago home of [Bill] Ayers and [Bernardine] Dohrn that Obama, then an up-and-coming 'community organizer,' had his political coming out party in 1995. Not content with this rite of passage in Lefty World — where unrepentant terrorists are regarded as progressive luminaries, still working 'only to educate' — both Obamas tended to the relationship with the Ayers."
Article: The Company He Keeps:
Meet Obama’s circle: The same old America-hating Left
http://article.nationalreview.com/?q=YThjYTU1ZDBjNmQ2YzcwNzU1MmYwN2JiMWY0ZGI0NDA=&w=MA==
______________________________________________

This conference is part of the Center's mission of helping to create a more engaged civil society, working towards social change, fostering coalitions between theorists and activists, and combating anti-intellectualism in contemporary culture. It will be both a celebration of ideas and a rigorous examination of the roles and responsibilities that intellectuals play in society.

I. Why Do Ideas Matter? (a keynote panel)

We introduce the “meta” theme of the conference by hearing “success stories” from diverse voices discussing their experiences intervening intellectually.

Alternative breakout tours led by Chicago activists. Tours of Bronzeville and other communities, and visits to organizations that are working on partnering theorists with activists.

IV. Intellectuals in Times of Crisis
Experiences and applications of intellectual work in urgent situations.

1 posted on 10/21/2009 6:24:03 AM PDT by ETL
[ Post Reply | Private Reply | View Replies]
To: ETL
"Charlie Company, from the 1st Calvary Division, had stumbled upon a massive underground bunker of North Vietnamese," Obama said.

Yeah he looks thrilled to be shaking that hero’s hand eh? And as afar as the weather morons blowing themselves up, pity the whole cabal wasn’t there.. might have saved us a lot of trouble today.. heh.

From another unrelated article...

“Last fall, over 250 Vietnam veterans from Charlie and Echo Company, which consists of Vietnam veterans from the the BN 5th Cav, 1st Calvary Division, visited the wall along the banks of the St. Francis River. They took part in a special candlelight vigil and laid a wreath featuring their symbol at the wall. In a touching measure, they planted a tree to leave a lasting mark.”

These guys came over to the Pentagon yesterday afternoon and were broken up into small groups with individual tour guides. Most of them lingered in the corridor closest to the crash site and actively discussed/questioned their guides. Nice looking guys who dressed well.

I was in the 1st Cav in Vietnam and I won’t go near this White House until it’s under new management.

Too bad this WH salute to Viet vets wasn’t done by Reagan or Bush 41/43.

Or was it? Something’s not being reported. Reagan was the first to declare that we had “fought in a noble cause” in Vietnam right after he took office.

Obama the first Prez to salute VN vets? I don’t believe it.

6 posted on 10/21/2009 6:49:49 AM PDT by elcid1970 ("O Muslim! My bullets are dipped in pig grease!")
[ Post Reply | Private Reply | To 2 | View Replies]
To: Pentagon Leatherneck
These guys came over to the Pentagon yesterday afternoon and were broken up into small groups with individual tour guides. Most of them lingered in the corridor closest to the crash site and actively discussed/questioned their guides.

From HumanEvents.com, April 29, 2008:
"By all accounts, he [Obama friend and associate, Bill Ayers] was a ferocious, violent, revolutionary Marxist in his halcyon days as a Weatherman leader. He and his Weatherman bombers were enamored of Ho Chi Minh, Che Guevara, Fidel Castro, Mao Tse-tung -- indeed, all the murderous heroes on the Left. Referring to the Weatherman members in August 1969, he said (according to the FBI): 'We’re revolutionary Communists.'

Ideal Bombing Weather:
'Everything was absolutely ideal on the day I bombed the Pentagon,' he writes (although he concedes it was really a group effort). 'The sky was blue. The birds were singing. And the bastards were finally going to get what was coming to them.' (p. 256 in the 2003 edition.)

Good for you! :) And a tremendous thanks for your service!

Thank you for your service!

No need for thanks. I did it for me.

As a Viet Nam vet, I can tell you this makes me sick to my stomach. I’m surprised he didn’t have Jane Fonda there to greet them.

Someone in the WH did his research. Looks like it is the first unit from RVN. I would think there were units during Tet, and Khe Sahn that should have received it too.

Wasn’t there a dark water river boat outfit that had a an officer wounded 3 times while in RVN? Wait, maybe there is a delayed CMH waiting for him?

‘Saw this yesterday. zero played these guys like a fiddle. It’s a real shame.

16 posted on 10/21/2009 7:40:00 AM PDT by onedoug
[ Post Reply | Private Reply | To 12 | View Replies]
To: All
In addition to the previously mentioned, Obama also gave a blurb for Bill Ayers' book, sat on the board of the Woods Fund with him for several years, was his partner at the Annenberg Challenge-sponsored program in Chicago, and joined him at various other public speaking events. He's also now claiming to have ghost-written Obama's book, "Dreams From My Father".

Note to the RCP.

"Jones was arrested during the L.A. riots and spent a short time in jail. "I met all these young radical people of color," he recalls, 'I mean really radical: communists and anarchists. And it was, like, "This is what I need to be a part of." I spent the next ten years of my life working with a lot of those people I met in jail, trying to be a revolutionary.'..."