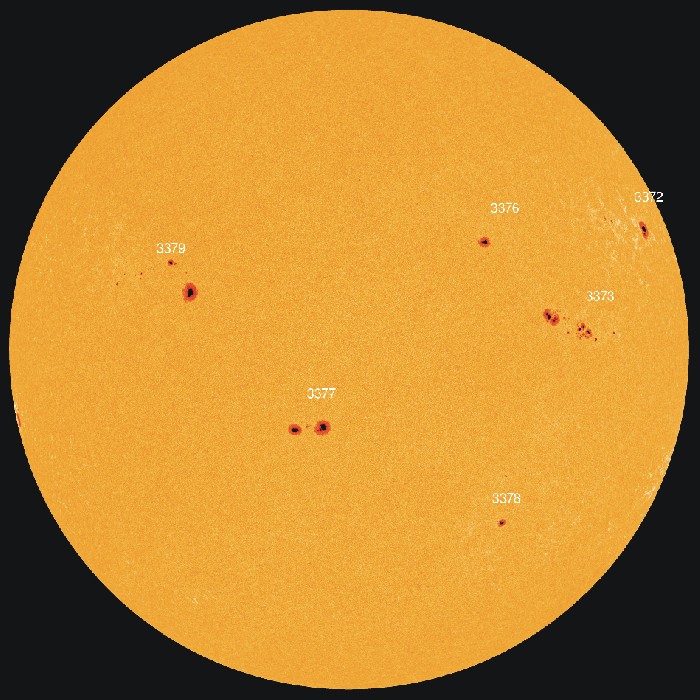 A new study in the journal Science by a team of international of researchers led by the National Center for Atmospheric Research have found that the sunspot cycle has a big effect on the earth's weather. The puzzle has been how fluctuations in the sun's energy of about 0.1 percent over the course of the 11-year sunspot cycle could affect the weather? The press release describing the new study explains:

The team first confirmed a theory that the slight increase in solar energy during the peak production of sunspots is absorbed by stratospheric ozone. The energy warms the air in the stratosphere over the tropics, where sunlight is most intense, while also stimulating the production of additional ozone there that absorbs even more solar energy. Since the stratosphere warms unevenly, with the most pronounced warming occurring at lower latitudes, stratospheric winds are altered and, through a chain of interconnected processes, end up strengthening tropical precipitation.

At the same time, the increased sunlight at solar maximum causes a slight warming of ocean surface waters across the subtropical Pacific, where Sun-blocking clouds are normally scarce. That small amount of extra heat leads to more evaporation, producing additional water vapor. In turn, the moisture is carried by trade winds to the normally rainy areas of the western tropical Pacific, fueling heavier rains and reinforcing the effects of the stratospheric mechanism.

The top-down influence of the stratosphere and the bottom-up influence of the ocean work together to intensify this loop and strengthen the trade winds. As more sunshine hits drier areas, these changes reinforce each other, leading to less clouds in the subtropics, allowing even more sunlight to reach the surface, and producing a positive feedback loop that further magnifies the climate response.

These stratospheric and ocean responses during solar maximum keep the equatorial eastern Pacific even cooler and drier than usual, producing conditions similar to a La Nina event. However, the cooling of about 1-2 degrees Fahrenheit is focused farther east than in a typical La Nina, is only about half as strong, and is associated with different wind patterns in the stratosphere.

For those wondering how the study bears on global warming, Gerald Meehl, lead author on the study, says that it doesn’t – at least not directly....

Global warming is a long-term trend, Dr. Meehl says in a phone conversation. By contrast, this study attempts to explain the processes behind a periodic occurrence. But, he says, a model finally able to reproduce a complex phenomenon observed in the real world does suggest that our climate models – the same ones we use to predict what will happen to global climate as we ratchet up co2 concentrations – are improving. And that will, inevitably, have an affect on the climate discussion.

A recent paper in Eos considers the evidence that we could be in for an extended period with few sunspots:

Why is a lack of sunspot activity interesting? During the period from 1645 to 1715, the Sun entered a period of low activity now known as the Maunder Minimum, when through several 11- year periods the Sun displayed few if any sunspots. Models of the Sun’s irradiance suggest that the solar energy input to the Earth decreased during that time and that this change in solar activity could explain the low temperatures recorded in Europe during the Little Ice Age.

Doesn't the Eos paper suggest that sunspot activity may not just affect weather but climate too?

And if anyone of these scientists are allowed on one of the media shows, they will probably have to use the majority of their time to choose the best bar b que or introduce some nitwit band.

3 posted on 08/28/2009 1:19:08 AM PDT by WVKayaker (Sufficiently advanced technology is indistinguishable from magic. -Arthur C Clarke)
[ Post Reply | Private Reply | To 1 | View Replies]
To: neverdem
Well the fact is the sun was unusually active during the 90’s when all that “global warming” was going on. And now that the sun has essentially gone inactive the earth is cooling. All while continued increases in CO2...

As far as the “long term trend” of warming, well duh... It has been slowly warming since the last ice age switched off where much of north America was covered with a mile or two of ice...

Strange how all that is rarely mentioned... And its obvious implications...

It has been an established if now PROVEN fact for many many decades now.

We need to do a NEW STUDY to confirm what we already know?

"..we have to stop sunspots, send your money to me and my friends at StopSunspotsNow @ moremajorBS.com"

Oh, don’t be silly. I’ve listened to Al Gore. I know that all weather and climate changes are controlled by human activity, primarily conservative businessmen. The sun is just a spot of light in the sky that gives us a little light, that’s all.

I say we send algore to the sun, and stop the dastardly sunspots.

10 posted on 08/28/2009 4:04:34 AM PDT by catfish1957 (Hey algore...You'll have to pry the steering wheel of my 317 HP V8 truck from my cold dead hands)
[ Post Reply | Private Reply | To 1 | View Replies]
To: neverdem
So, solar activity cycles also affect the production of Ozone. If this is true, we should start seeing some big ozone holes due to the extended Solar minimum. Good thing we also wont be needing efficient air conditioning.
11 posted on 08/28/2009 7:06:04 AM PDT by justa-hairyape
[ Post Reply | Private Reply | To 1 | View Replies]
To: justa-hairyape; xcamel; Tolerance Sucks Rocks
xcamel, Tolerance Sucks Rocks: you may wish to ping your lists to this article.

This is NOW the third MAJOR "positive feedback" mechanism of Solar Irradiance proposed that BLASTS the Global Circulation Models which only allow that 0.1% variation from the Sun's output.

The fool alarmists keep claiming that everything is understood, and that it is impossible that the Sun is responsible for the bulk of the warming despite such CLEAR historical data such as:

From Lassen linked here which points out that Solar Cycle length is HIGHLY correlated to temperature of Earth, which temperatures can NOT be explained by the CO2 hypothesis.

With this mechanism, the cosmic ray mechanism, and the negative feedback cloud mechanism proposed by Dr.Spencer (essentially meaning the climate models are confusing cause and effect), there are now three strong hypotheses to enhance the direct effect of solar radiation. None of these are included in current GCMs, and have the effect of invalidating all predictions previously made by these models.

13 posted on 08/28/2009 1:13:46 PM PDT by Tolerance Sucks Rocks (Barack Obama: in your guts, you know he's nuts!)
[ Post Reply | Private Reply | To 1 | View Replies]
To: neverdem
About sunspots, they are on the right track. They have a long way to go. First they need to total sunspot activity for a whole cycle and compare each cycle to annual precipitation, average winter temperatures, accumulated cyclone energy, numeric number of named storms and distribution of named storms in terms of tropical storms, hurricanes and major hurricanes. Finally, where did they generate?

Since 1934, sunspot activity more than doubled and per Joseph D’Aleo, we are in another 100 year cycle and thus, another Minimum has started.

On the other hand, glaciers and Polar Region ice masses have receded.

Biologists should have noticed overall changes in animals and insects. Topography moved a little further north and south of the Equator in the last 80 years.

I was hoping someone would come along and actually measure the strength of a sunspot and make a little better scale than what I've been working with.

This is going to be an exciting contribution to the basic fundamentals of the purpose in sunspot activity.

That needs to be looked in relation to our elliptical orbit around the sun and the Axis tilt of the earth.

This could really get fine tuned and take the guess work out of global warming vs global cooling and Ice Age vs maximum extension of topography.

We are on the threshold now!

The major players in our climate appear to be Solar Activity, Volcanic Activity and Orbital Variation. As far as a biologically derived influence, my guess would be that at this point Oceanic Plankton Biomass has a greater effect then Human generated CO2.

Weather is what ruins picnics, climate is what spoils a good drunk.

I see what you mean as I progress through the thought.

I agree on two of the three as major.

I view volcanic activity as a trigger, a modifier or acts as an accelerator to global climate change. If all was in ice age period, how would that make a difference? Maybe prolong the ice age.

The carbon dioxide may not have an impact. If Yellowstone blew its top this decade, add in near zero sunspot activity, what would be the overall impact?

Variation of orbit plays a large role, but it comes back to solar activity. The two can play off of each other for 100 centuries on end.

The German scientists have about nailed down part of that sunspot strength.

If they can nail that down, the rest of the players can be more accurately measured.

Do not forget the moon.The moon causes atmospheric tides just as the moon affects the oceanic tides. It appears that you can expect colder temperatures when the moon is full or new due to this effect.