Americans are not the "chosen people": http://www.youtube.com/watch?v=AiTuGeqlEuE

Americans are too dumb to realize they helped cause 9/11: http://www.youtube.com/watch?v=5x8ZxZO8BFo

The U.S. has not “really ever” helped poor blacks (at 4:15 mark): http://www.youtube.com/watch?v=H6PBbbnPwfw

Several years ago Ogletree was caught having assigned students to write up a book for him on which he listed himself as the sole author -- he was caught only because the students had plagiarized some material from two books: http://harvardclownschool.blogspot.com

Indeed, according to a current Harvard Law School student, Ogletree is viewed as "a cancer on the body politic of our school": http://america-still-racist-even-if-obama-elected-says-his-top-adviser.autoadmit.com/thread.php?thread_id=873773&mc=8&forum_id=2

Despite this history, Ogletree serves as a "senior advisor" to the Obama campaign, and a member of his Black Advisory Council, and he apparently is slated to become a high-level Justice Department official if Obama wins:

Another member of Obama's Black Advisory Council is Princeton professor Cornel West, who in his own appearances at Harvard Law School (in which he was introduced by Ogletree) has repeatedly expressed radical, anti-American views, and strong support for Minister Louis Farrakhan. Videos of those statements can be found here: http://www.youtube.com/user/cornelwestvideos

Despite West's history of anti-American statements, less than a year ago Obama praised West as a "genius," and his "oracle." Video here: http://www.youtube.com/watch?v=63MjK7MlA7I

But doesn't the guy really mean Larry Sinclair is right that Obama is just bi-sexual?

Is he "bi -ist" or pure socialist? 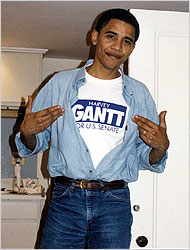 I still want to know how Grampy Stan came to know Frank Davis and tuck 0be under Frank’s wing.

Please, let’s stay away from rumors about Obama’s sexuality.

0be’s an International Socialist -—> Marxist (and a Mulatto one at that).

It seems to me that Nobama is the only person calling him black.He’s doing everything in his power to avoid showinng the other 50% of his bloodline.

The mother and grandmother he threw under the bus.

He needs to come up with some other word I think.

Then of the two controversial figures on Obama’s “Black Advisory Council,” I suppose Cornel West, not Charles Ogletree, would be your concern. In one of the videos of his Harvard appearances, he talks fondly of his past Marxist studies. Given all the radical anti-American and Marxist statements he’s made, I can’t for the life of me understand why Obama called West a “genius” and “oracle” just a year go.

11 posted on 11/02/2008 12:34:28 PM PST by HarvardHater
[ Post Reply | Private Reply | To 8 | View Replies]
To: HarvardHater
I've said this before...Bill Clinton was all about himself. Obama is about Socialism and wanting to change how we think. Who is the scarier person?

Has Obama ever called himself black, or African-American — at least during the campaign (maybe that’s what his conclusion was in this 1st autobiography, “Dreams”)?

My recollection is that in early 2007, Steve Kroft of 60 Minutes flat-out asked him when he decided he was black, and he dodged it — he said something like other people considered him black, because of his physical appearance.

Actually, I just found the transcript of that.

Here’s what he says: “I am rooted in the African-American community, but I’m not defined by it. I am comfortable in my racial identity and recognize that I’m part of a very specific set of experiences in this country, but that’s not the core of who I am.”

“I don’t have the typical background of African-Americans. Not just because my mother was white, but because I grew up in Hawaii; I’ve spent time in Indonesia. There was all sorts of ethnicities and cultures that were swirling around my head as I was growing up.”

“KROFT: You were raised in a white household?

KROFT: Yet at some point, you decided that you were black?

OBAMA: Well, I’m not sure I decided it. I think if you look African-American in this society, you’re treated as an African-American. And when you’re a child in particular that is how you begin to identify yourself. At least that’s what I felt comfortable identifying myself as.”

So my question: if Obama himself hasn’t figured out, or at least if he hasn’t said, what race he is, then what the heck is a “senior advisor” of Obama doing just before the election raising the issue of his race, and saying he’s “biracial”???

I assume, as Obama’s top advisor on race issues, that in describing Obama as “biracial” he’s relying on discussions with Obama, right? So is this Obama’s way of announcing he’s finally figured out his racial identity: “biracial”?

Rereading what I just posted, I noticed that at the very end of Obama’s answer to Kroft’s question, Obama said that growing up he felt comfortable identifying himself as African-American.

Assume that he hasn’t changed his mind since then about his racial identity. Ogletree’s statement then becomes much more difficult to understand: (1) Obama’s publicly identified himself as African-American; but (2) his top advisor on race issues, a tenured professor at Harvard Law School who’s known Obama for two decades (he mentored both Obama and his wife as students) says Obama’s actually “biracial.” Does that mean Obama’s all these years has SECRETLY been presenting himself to those he’s close to as “biracial,” while PUBLICLY presenting himself as “African-American”? What gives?

Isn't it incredible that Harvard started as a world class
educational institution promoting the gospel of Jesus
the Christ and now it has become an anti-American
cesspool of Marxism and racism.

You mean Harvard started as a Christian denominational institution? I guess the Puritans were around then, and since I suppose all the leading citizens were Puritans that had to have an effect, but I didn’t know it was denominational. If you have some info on that, I’d love to see it. Interesting.

To me, though, the more interesting thing is that just a few decades ago Harvard was a politically conservative place, right? And now it seems a haven for PC fuzzy thinking. However, I’m not sure whether Harvard’s gotten skewed that way any more than other top universities.

Why are these people prof at colleges?

has nothing to do with his race, he is just not to be trusted.

I remember something published in the New Republic to the effect that the faculty lowered the standards for making Ogletree a tenured professor, and only required that he publish one serious scholarly article in order to get tenure — and even after getting this special break, Ogletree had students ghostwrite the article for him. Assuming that’s true (I don’t know; I’m just summarizing what was in the New Republic), Ogletree committed fraud to get on the Harvard law faculty.

It was a big scandal at the time, but no one could prove it (obviously Ogletree and the students weren’t talking), so he got tenure. Only a few years ago did proof emerge of Ogletrere’s habit of having students write the stuff he publishes, when some students made the mistake of plagiarizing from a couple books.

Everything about Ogletree looks like a disgrace. I don’t understand why the Obama campaign would have anything to do with him. I guess the idea was that, for all his faults, the fact that Ogletree happens to be black would immunize him from criticism — because to criticize someone who happens to be black, for anything, is racist, right?