The veteran Government adviser said pensioners in mental decline are "wasting people's lives" because of the care they require and should be allowed to opt for euthanasia even if they are not in pain.

She insisted there was "nothing wrong" with people being helped to die for the sake of their loved ones or society.

The 84-year-old added that she hoped people will soon be "licensed to put others down" if they are unable to look after themselves.

Her comments in a magazine interview have been condemned as "immoral" and "barbaric", but also sparked fears that they may find wider support because of her influence on ethical matters.

Lady Warnock, a former headmistress who went on to become Britain's leading moral philosopher, chaired a landmark Government committee in the 1980s that established the law on fertility treatment and embryo research.

A prominent supporter of euthanasia, she has previously suggested that pensioners who do not want to become a burden on their carers should be helped to die.

Last year the Mental Capacity Act came into effect that gives legal force to "living wills", so patients can appoint an "attorney" to tell doctors when their hospital food and water should be removed.

But in her latest interview, given to the Church of Scotland's magazine Life and Work, Lady Warnock goes further by claiming that dementia sufferers should consider ending their lives through euthanasia because of the strain they put on their families and public services.

Yes, well this women has lived way beyond her usefulness...

Time to put her out of her misery...

And “put her down”

I wonder what she thinks about these people taking up space on earth? http://www.npr.org/templates/story/story.php?storyId=92592545

5 posted on 09/18/2008 8:37:00 PM PDT by w1andsodidwe (Jimmy Carter(the Godfather of Terror) allowed radical Islam to get a foothold in Iran.)
[ Post Reply | Private Reply | To 1 | View Replies]
To: Free ThinkerNY
pensioners in mental (and physical) decline are "wasting people's lives" and have a 'duty to die'

"Hey! That's my line." Democrat Richard Lamm Governor of Colorado in the 1980s and 90s

I had two grandparents die of Alzheimer’s Disease and for 3-5 years, they were literally out of their minds. The moral issue comes when the caregivers have to decide whether or not they are in pain, that is the true issue.

It would be very hard to euthanize a parent or spouse, just putting a dog to sleep is very trying, much less a person.

I hate to say it, but in the coming Orwellian times we are approaching with cameras, DNA tracking, retina tracking, massive databases with fingerprints, buying patterns, finacial and medical records, even microchips (please excuse my David Icke and Alex Jones digressions), euthanasia will be a fact of life in an overcrowded world with limited natural resources.

8 posted on 09/18/2008 8:38:24 PM PDT by wac3rd (The MSM will accompany the Captain of the SS Marxist Titanic to the bottom of Lake Michigan)
[ Post Reply | Private Reply | To 1 | View Replies]
To: Free ThinkerNY
So one's parents are like pets - once they become too infirm physically or mentally to be enjoyable anymore, one can put them down.

At least Hitler's new followers are openly adopting his justifications: the lives of some people are inconvenient.

This is much more honest than those who claim that murdering the elderly is an act of mercy towards the victim - they admit now that it is an act of convenience for the murderer.

Interesting how Pope Benedict just spoke about this on Sept 15, 2008. This is an issue near to my heart since my mom has been suffering from dementia since at least 2002.

“People must accept death at “the hour chosen by God,” Pope Benedict XVI told ailing pilgrims Monday in an anti-euthanasia message at Lourdes, the shrine that draws the desperate, sick and dying.”

This ‘dame’ should get together with Nicholas Provenzo. He wants the ‘nonproductive burdens’ eliminated in utero and she wants them off’ed in their golden years.

Soylent Green is people. It is NOT a stretch to go pro-choice on whether a person has the right to “choose” to support their Grannies. Planned Grandparenthood, here we come.

This is exactly how Nazi Germany started.
It’s called “quality of life” and soon others will make that determination for everyone.
Until “they” have the compliant populace they so desire. 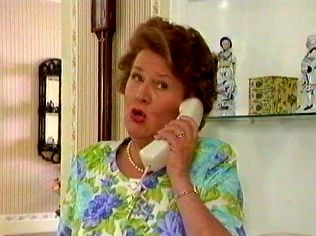 I hope that Warnock women doesn't have him.

15 posted on 09/18/2008 8:50:02 PM PDT by BBell
[ Post Reply | Private Reply | To 1 | View Replies]
To: Free ThinkerNY
The veteran Government adviser said pensioners in mental decline are "wasting people's lives" because of the care they require and should be allowed to opt for euthanasia even if they are not in pain.

Okay Lady Warnock.... you first. You sound like a good waste of skin....

I know a doctor who killed her mother with morphine. The mother would have died of cancer anyway, but the daughter remains a tormented soul.

You have gulped from the Left's BS Koolaid.

Do you mean the overcrowded world that would fit in the state of Texas?