Experts on invertebrates have expressed "profound shock" over a government report showing a decline in zooplankton of more than 70% since the 1960s.

The tiny animals are an important food for fish, mammals and crustaceans.

Charity Buglife said it could be a "biodiversity disaster of enormous proportions".

They said it could have implications for creatures all the way up the food chain, from sand eels to the seabirds, such as puffin, which feed on the fish.

Defra described the Marine Programme Plan as one of the department's high impact programmes, reporting directly to the Defra board and used to guide policy.

Buglife director Matt Shardlow has written to Rodney Anderson, director of marine and fisheries at Defra, praising the level of information in the document but also expressing the organisation's serious concerns.

In his letter, seen by the BBC Scotland news website, Mr Shardlow said: "The disappearance of butterflies, moth, bees, riverflies and other small animals is an environmental tragedy.

"But, despite this experience, we were profoundly shocked to read that zooplankton abundance has declined by about 73% since 1960 and about 50% since 1990.

"This is a biodiversity disaster of enormous proportions."

A graph shown in the report charts a steady decline in zooplankton from 1990 to 2006.

He said: "Zooplankton is the basis of many food chains in the marine environment.

"Without them it is going to cause problems further up the chain."

Thought this article was rather amusing if the photo above is a recent one. According to Buglife, that drop of water should have more than three times as many zooplankton in it. 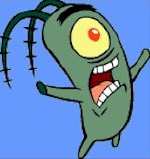 Oh.... I thought this was going to be about cats not always landing on their feet::’)

However, I went from "hmm i wonder" to "this is likely BS" when the mention of global warming got tossed in there.

Is it biomass decline, biodiversity decline in specific phyla, what? Dang, guess I gotta go track down the original report.

The seawater drop in the pic is obviously not a random sample. :-)

Then how come Tuna fish are getting bigger???

Charity Buglife said it could be a "biodiversity disaster of enormous proportions".

Yep, settled science. All deniers will be rounded up and prosecuted for crimes against humanity. Time to start planing a UN conference in some extravagant Bali resort.

This has got to be satire - “Charity Buglife” and “Craig Macadam” - this is the stuff of jokes!

Oh well. I guess we better kill the whales. They’re the ones eating the plankton up anyway...

I wonder how much the protection of Whales has to do with the decline in zooplankton? I would love to see a comparitive graph of all whale population to the zooplankton.

“Oh well. I guess we better kill the whales. They’re the ones eating the plankton up anyway...”

And, the Japanese will be soooo velly happy.

I don't know that statement is true, in a general sense. They are doing so near Australia recently, but highly fished species have both greater fluctuations in size as well as greater diversity in size in a school at any given time.

In Australia's case, recent weather changes, possibly climate changes, have led to greater upwelling of nutrients, which feeds the lower portions of the food chain. But that doesn't mean these are necessarily worldwide (tuna size or zooplankton abundance trends)...do you have info to the contrary? I think the article dealt with Scottish or UK waters.

(Note also that depth of fishing tends to change the size of tuna you get...maybe ocean cooling is helping? Or maybe the low insolation is meaning less of the phytoplankton production, or... )

Side note...The Scotsman had an error when reporting this story, saying zooplankton were at the bottom of the foodchain. I'm encouraged to see that the BBC corrected that before running the story. :-)

Must be coz the news was from Australia and the opposite is happening there. 8-D

Not only that, but the effects would’ve *already* been noticed by now.

Don’t these scientists believe in evolution?