How does the pro-terrorist group Code Pink infiltrate closed events where the U.S. Secret Service is in charge of security? One way is with fake press credentials made by a diarist at the Daily Kos.

Code Pink has made a habit of infiltrating events and getting close to officials under the protection of the U.S. Secret Service.

Yesterday Code Pink member Desiree Farooz rushed the stage and came dangerously close to President Bush at Monticello. The weekend before she rushed John McCain. Last fall she got close enough to Condoleeza Rice to place her hands around the Secrtary of State's head.

At the McCain event, legitimate reporters noted that McCain was heckled from the press area by a protester:

The second and third protestors were escorted out just as quickly as the first, and the fourth protestor only made a larger stir among the press, as he had been seated within the press section.

A diarist at the Daily Kos posted yesterday about his making phony press passes for members of Code Pink at the behest of the group's co-founder, Castro-groupie Susan "Medea" Benjamin.

Benjamin, who founded Code Pink's parent group, Global Exchange, to further her Marxist agenda under a green/anti-capitalism banner, was arrested in Miami at the U.S. Conference of Mayors two weeks ago.

Benjamin wrote about the experience here:

You might have heard that Liz Hourican and I got arrested at the conference. Sadly, that is true. We were pre-registered as press for Global Exchange, got our credentials and were participating in the conference when hotel security groups and police surrounded us and told us to leave. It seems they remembered us from the last time we were in Miami speaking out against terrorist Posada Carrilles and were worried that we might embarrass the conference host—Miami’s Mayor Manny Diaz. When we objected to leaving, they arrested us. I was charged with trespassing; Liz was charged with trespassing, disorderly conduct and resisting arrest. After 8 hours in a cramped, smelly, dirty jail cell with 25 prostitutes, our friends posted $3,500 bail for us and we were released. We have to return to Miami to appear in court next month.

You can read Medea's partner in crime Liz Hourican's barely coherent version of their arrest here.

Sorry for the short diary...

Early this morning I found an unusual email from Medea Benjamin waiting for me in my inbox. It seems that last week when she was arrested in Florida, they confiscated her Global Exchange press pass, and could I make her another one?

Ever since I figured out how to duplicate Medea's press pass for other members of CodePink, I have been doing so with her blessing. Since Medea is the founding director and CEO of Global Exchange as well as one of the founders of CodePink, how I implemented it may be a bit of a hack; but it is quite legitimate insofar that yes, these are valid press passes for a news organization, created with the full knowledge and permission of the company director.

Now, ironically, I was going to have to whip out a copy of the document that served as the original. Last summer, using photos of her own press pass and head shots of the various members, I created a template in Avery Designpro's free edition, with a bit more assistance from a handy bit of freeware called Gadwin Printscreen.

I had a little fun with it, as you might imagine. There was a bit of a delay producing the 2008 versions of the passes when the primary system I had the templates stored on crashed.

However, I had found a backup of the original template a few weeks ago and so this morning I was able to email her a copy within seconds.

A few minutes ago I found out why she needed it...

Now this is MY kind of fireworks! My July 4th just improved a thousandfold.

Thank you, THANK YOU, THANK YOU CodePink, for refusing to allow that traitorous, fascist, murdering CREATURE occupying the White House a moment of the peace that he consistently denies to others!

Last May, a member of Code Pink wrote about a ruse to infiltrate a press gaggle to ambush Karl Rove:

Anyhoo, we'd planned a two-pronged approach: I (NTodd) was to act like a journalist and camp out with the regular press waiting to get a statement after the taping, hoping to delay him a bit; Liz and Lorena donned the Pink Police uniforms ready to take the criminal away to face Lady Justice whilst all the cameras were rolling. Then we got word that Rove chickened out and was sneaking out the back, so Liz and I booked it over there ahead of the other media, but it was clear he'd already scarpered off. Of course if you've already seen Liz' pictures, you understand how scary "the [Code] Pink ladies" were.

Here are the questions I didn't get to ask:

Mr Rove, do you still think Hillary is the stronger Democrat [sic] candidate after her Kennedy assassination remark?

Do you think she has a better chance against McCain because her campaign uses the same underhanded tactics you did to beat him in 2000?

I'm sure the answers would have been enlightening. Despite the no show, this did once again show just the kind of person Rove is: spew lies in a safe, controlled media environment and shrink away from confronting reality and real citizens.

The side benefit of my not wearing the pink for a change--not to mention carrying a camera, a recording device, and a spiral notebook (thanks, Des!)--was getting an interesting glimpse of how people react to Pink Action. I talked shop quite a bit with a visitor who produces a news magazine for a Boston TV channel (I won't say which), and early in our conversation he observed, "Man, those Code Pink people are relentless!" I agreed.

When he found out I was there to "cover" the Rove appearance he asked, "What do you think they're going to do? Harass him?" He rolled his eyes. I explained in my role as a detached reporter with some experience seeing Code Pink in action that they just want to get him on record answering some straightforward questions (*ahem*).

I later learned that his son is a Marine and had been in Fallujah. He was down here visiting him and other family--his son is receiving daily treatment for "a variety of things" in Bethesda, presumably as a result of his service. One might understand his skepticism of Code Pink in that context, particularly if they don't internalize the fact that we're fighting to bring people like his son home and to get them the care they need. I would've done a bit more educating but didn't want to give the game away.

Since its founding in 2002, Code Pink has worked with state sponsors of terrorism and terrorist supporting groups around the world. It has supported and funded the killing of Americans and free Iraqis by the terrorists in Iraq.

While it is highly unlikely that Code Pink leaders Medea Benjamin and Obama bundler Jodie Evans would risk their millionaire lifestyles, they prey on and train emotionally unstable people (like the Weathermen did in the Sixties.), pumping them full of hate and paranoia.

Benjamin and Evans believe that terrorism is justified to wage war on America. Will the perpetrator of the next terrorism attack or assassination attempt be found to have a Global Exchange press pass on them courtesy of Code Pink and a Daily Kos diarist?

The Secret Service needs to pay closer attention to prevent that from happening.

TomGuy, can you do as kristinn requests in post #1? or has the page already been taken down?

You mean this page?

3 posted on 07/05/2008 10:48:09 AM PDT by SE Mom (Proud mom of an Iraq war combat vet)
[ Post Reply | Private Reply | To 1 | View Replies]
To: kristinn
Yesterday Code Pink member Desiree Farooz rushed the stage and came dangerously close to President Bush at Monticello. The weekend before she rushed John McCain. Last fall she got close enough to Condoleeza Rice to place her hands around the Secrtary of State's head.

The Secret Service catalogs threats and potential threats, they know their IDs, where they live, their backgrounds, MOs, what circles they rotate in, and many of them have their movements monitored.

If this same individual has done this multiple times, how is it possible for her to get anywhere near one of these events with or without fraudulent ID?

kristinn said someone please do a “screen capture” because he was thinking that the evidence of code pink using faked credentials to get into events where they can disrupt and even rush the stage, could be removed from that page, and the proof would be gone.

A: They ride in on brooms under a sisters-of-doom mirage-vapor spell?

8 posted on 07/05/2008 11:04:11 AM PDT by MonicaG (Help Wanted: Conservative leadership '08)
[ Post Reply | Private Reply | To 1 | View Replies]
To: kristinn
You nailed 'em dude! I'd print out hard copies of everything you collect off that site and then Fed Ex them to the Secret Service first thing Monday morning, just to be sure that the proper officials receive them.

AND the U.S. Capitol Police

If this doesn't result in SOME kind of appropriate action against this bunch of crazies, then I don't know what will. Anyone can print up a media ID. That and two bucks will get you a cup of coffee.

The only media credentials that count are the ones produced by the sponsors of an event. If they were printing fake Whitehouse credentials, that would be a real crime.

All they have is a bogus company ID. It is up to the sponsors of the event to decide if they will let them in.

For example,to cover a presidential event, you would have to get approval from the White House. The White House generally requires evidence of employment in the media (they do check), Government issued picture ID, advance reporting of full ID info, including social security number for a background check, then security screening prior to being issued a pass for the event.

Otherwise unknown media outlets will be required to show proof of publication, including tearsheets, before they will even be considered for admission.

Hey Mark, check this out!

I’ve got it copied and see someone else already posted it- will keep it on file if needed.

These people are ignorant fools.

I would add that the press also knows who Desiree and Medea are. To imagine that these misfits go unnoticed hiding out in the midst of press is nonsense. They’re being given safe haven; if not out of sympathy for the cause, then for more “exciting” footage.

I’ve got it screen capped too.

Excellent post! Thanks for keeping us and the SS informed.

Thank you! Check your freepmail.

18 posted on 07/05/2008 11:23:24 AM PDT by Heatseeker (I'll vote McCain for President if I can vote Cheney for God)
[ Post Reply | Private Reply | To 15 | View Replies]
To: kristinn
Yesterday Code Pink member Desiree Farooz rushed the stage and came dangerously close to President Bush at Monticello.

Desiree Farooz is a PALESTINIAN. Considering past problems with Palestinians and American politicians, I would hope the Secret Service would take this matter very seriously. 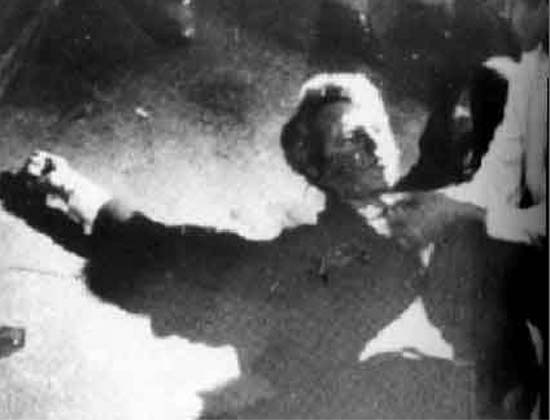