ANKARA, Turkey - The Turkish gunman who shot and wounded Pope John Paul II is applying for Polish citizenship because he wants to live in the country of the late pontiff, whom he called his "spiritual brother."

But the Polish Foreign Ministry said the chances of Mehmet Ali Agca getting citizenship are "minimal" since he hasn't provided any "good service" to John Paul's mostly Catholic homeland.

Agca also wants to be transferred to a prison in Poland to serve the remainder of his sentence on a different conviction, lawyer Haci Ali Ozhan told The Associated Press.

"He has chosen Poland because it is country of the pope," Ozhan said. "Because the pope forgave him and paid close attention to him, we believe that the application will be accepted."

Agca shot and seriously wounded John Paul at St. Peter's Square at the Vatican on May 13, 1981. Two years later the pope met with Agca in an Italian prison and forgave him for the shooting.

Agca served 19 years in an Italian prison for the attack. He currently is serving a prison term in Turkey for killing prominent journalist Abdi Ipekci in Turkey in 1979 and is due to be released in 2010.

What motivated his crimes remains a mystery, but he belonged to an extreme right-wing Turkish organization, the Grey Wolves, which was involved in political murders in the 1970s.

In a petition addressed to Poland's devout Roman Catholic president, Lech Kaczynski, Agca said: "I shall be proud of becoming a member of the noble Polish nation, if my request to be granted Polish citizenship is accepted."

The petition to the president, who has the power to bestow or revoke Polish citizenship, was made available to the AP.

"I am not a stranger to your country because the national hero of Poland, Pope Karol Wojtyla, is my spiritual brother," Agca said, referring to John Paul by his birth name.

Agca's lawyer said he submitted the application to the Polish Embassy in Ankara on Thursday. It wasn't immediately processed, however, due to some missing paperwork. Ozhan said he would return next week to complete the application.

In Warsaw, Poland, the Foreign Ministry spokesman, Piotr Paszkowski, said officials had known for some time of Agca's plan but that chances of him being accepted were slim.

Paszkowski said the five-year rule "can be waived if the foreigner seeking Polish citizenship has special merits for the country, has done good service to Poland."

"Agca rather has not."

John Paul is revered as a national hero in Poland. After he was shot, priests throughout the country led prayers for him amid fears he would not survive.

Dude must be really a freak.

In any Muslim country this guy would be welcomed as a hero.
Why is the press reporting what this psycho has to say?

Isn’t he a muslim? And he was pardoned and is serving a separate murder conviction.

Prisoners don’t get to demand what nation they are jailed in, especially when they are not citizens of those countries and have committed their crimes elsewhere... 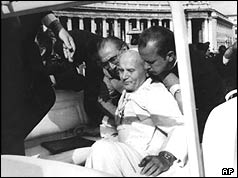 An intelligence test for the Polish government.

The Grey Wolves campaigned for low taxes and small government?

One of their slogans: Dökülen kan, alınan can bizim / Yıkılsın liberal kapitalizm! (The blood spilled and the lives taken are ours / May liberal capitalism collapse!)

They don't sound right-wing to me.

The late Pope his “spirituaul brother”?

Agca is just another insane Muslim and the worst kind:

The Grey Wolves are a hateful Isalmic terrorist organization committed to erasing every vestige I(not much left) of Christianity in Asia Minor and recapturing their former European colonies and their slaves.

FRiend, His Holiness forgave and befriended him - be of similar spirit - find it in your heart to also forgive him.

12 posted on 05/02/2008 1:46:14 PM PDT by Spacetrucker (tick tock, tick tock - it's the Dinosaur Media Death Clock!!)
[ Post Reply | Private Reply | To 4 | View Replies]
To: agere_contra
The press uses "right wing" to mean nationalist (as in those "right wing" Turks the Grey Wolves), religious, (as in "right-wing Muslim leaders strive to increase the political influence of fundamentalist Islam") and/or obstinately opposing any changes (as the hard-line communists during Gorbachev's regime were called the "right" or the "conservatives.")

Just more proof that Mainstream Media aparatchiks are either deliberatly sowing political confusion, or are reliably lazy and dumb.

That makes sense, I read that they oppose any recognition of the Armenian Genocide (rather like many on FR, in that respect).

Well, if he isn't anymore ("spiritual brother" - read between the lines, people), I hope he has the sense not to say so explicitly until he is safely in, say, Poland.

By any means, give it to him! Me and my buddies will wait for him at the Warsaw Int’l Airport to give hime a proper greeting... he might not like it though.

In a strange way, I’d rather have this man in Poland than in a Muslim nation after he is let out of prison. And I am thinking more along the lines of how he will be treated and viewed by the people he lives with after he gets out. In other words, I am thinking about the perhaps positive effect he would have in Poland as a forgiven brother, versus the negative effect he would have in a Muslim nation as some sort of folk hero to the rabid anti-Christians.

I really do think that the Pope visiting him in prison had an effect on this man’s life. If he is allowed to go to Poland I could even see him converting to Catholicism, which would definitely not happen if he is released to live in Turkey, for example.