The Bush administration may be trying to ignore Hugo Chavez, but some local gas station owners are moving to protect themselves from the backlash against the Venezuelan president's anti-American rhetoric.

Calls by some across the country to boycott gasoline sold by Venezuelan-owned Citgo are cutting into sales, prompting some station owners to move to other suppliers.

George Vazquez, owner of a convenience store and gas station on Kingston Pike in West Knoxville, is among several local independent Citgo station operators who will be switching to Marathon Oil of Findlay, Ohio, in the coming weeks.

"My gas sales were down 30 percent last year," Vazquez said. "People will come into the store and buy groceries, but they tell me they won't buy gas from Citgo."

The problems with Citgo increased after Chavez's September 2006 visit to the United Nations where he referred to President Bush as "the devil."

Calls for boycotts of Citgo were heard in states from Massachusetts to Florida following Chavez's U.N. visit. Shortly after the U.N. speech, 7-Eleven stores announced they would cancel a 20-year contract with Citgo that supplied 2,100 stations. Several Internet sites also are devoted to promoting the boycott.

Vazquez said he began negotiations with Marathon late last year after discussing his problems with other Citgo station owners. He decided that the anti-Chavez sentiment was translating into a growing anti-Citgo sentiment among customers.

Citgo, based in Houston, is owned by PDV America Inc., a wholly owned subsidiary of Petroleos de Venezuela SA, the national oil company of Venezuela.

"All of our stations are independently owned," said Annabell Lopez-Curtis, spokeswoman for Citgo in Houston. "They make their own decisions."

Banners at Vazquez's store proclaimed the switch to "American-owned" Marathon. A lighted sign visible from Kingston Pike declared "Hugo Chavez you are out of here."

Vazquez, who immigrated to the United States from Argentina 32 years ago, said he is not trying to make a political statement against Chavez but that he is only responding to the sentiments of his customers.

Tom Yoskovich, who works at Gridley Auto Sales next door to Vazquez's store, said he has been happy to buy coffee and other things from the store but reluctant to buy Citgo gasoline because of the connection to Chavez.

"I won't buy Citgo," Yoskovich said. "Once he (Vazquez) switches to Marathon, I'll be happy to buy his gas."

Ohio-based Marathon is gaining strength in Tennessee. The number of Marathon stations in Tennessee increased from 84 to 103 between March and December 2007, said Marathon spokeswoman Linda Casey.

The new Marathon stations have converted from a variety of other brands, including Citgo, but there is a clear trend with Citgo gas retailers, Casey said.

"There has been a reaction to our friend Chavez," she said. "It's hurting their business."

Awesome. Thanks for posting.

The Navy Exchange system used to sell Citgo gas. After Hugo’s statement, they changed their supplier, and badged their stations as NEX (Navy Exchange).

Where I live, Citgo is always the most expensive gas. And usually by 5 to 8 cents a gallon.

A number of the C stores in N. Georgia with Citgo logos have switched their signage to “Kangaroo”. The fuel supply is probably unchanged but I’ve little doubt that the Chavez effect was the driver for the re-branding.

I was traveling through the South last Summer, and I’m pretty sure I bought Amoco at the Kangaroo stations.

27 posted on 03/04/2008 8:44:25 AM PST by SmithL (That's my story & I'm sticking to it!)
[ Post Reply | Private Reply | To 24 | View Replies]
To: SmithL
Calls by some across the country to boycott gasoline sold by Venezuelan-owned Citgo are cutting into sales, prompting some station owners to move to other suppliers.

Oh HECK yes I will ping that! 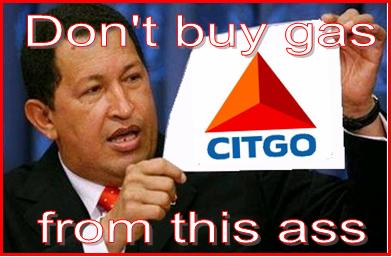 I’ve been boycotting Citgo, too. Glad to see that many have taken up the cause as well. Let’s hope the other gas station owners wise-up and switch.

Consider this an automobile freep that every freeper reading this can participate in.

I have a Citgo in my neighborhood. I'm going to drop in and nicely say I don't buy gas at your place because of Chavez, etc. This is just as effective, maybe more than just driving past.

I wouldn't buy gas there, anyhow, LOL, as it has substantially higher prices than our friendly Hess.

I will check around here in Dallas - DFW area to see if they are here but that pic looks very familiar.

“Shortly after the U.N. speech, 7-Eleven stores announced they would cancel a 20-year contract with Citgo that supplied 2,100 stations.”

They have all changed over here in my part of Texas.

Correct me if I am wrong, but what gas Citgo doesn’t sell to retailers, cannot they just resell it to other distributors and move it that way? What are the implications of this, if true?

How do I tell if my local gas station is selling CITGO?

37 posted on 03/04/2008 10:05:13 AM PST by Grunthor (Known to cause insanity in lab mice.)
[ Post Reply | Private Reply | To 1 | View Replies]
To: SmithL
I understand the sentiments expressed here, but Citgo will merely start wholesaling its gas to other suppliers who will then sell it under their names. There unfortunately isn't enough gasoline to supply the market without Venezuela's.

Calls by some across the country to boycott gasoline sold by Venezuelan-owned Citgo are cutting into sales, prompting some station owners to move to other suppliers.

&&&
Good! I have been boycotting ever since I heard who the supplier was, even before Hugo’s UN speech.

Venzuela own half of Hess? For real?