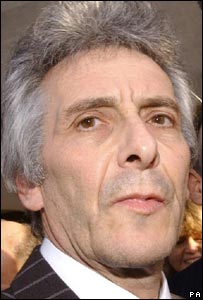 British property developer Nicholas van Hoogstraten has been arrested in Zimbabwe, according to local media. The state-run Herald newspaper said Mr van Hoogstraten, 63, was charged with breaking foreign exchange laws after a night raid at his Harare home.

He is accused of demanding rent in overseas currency, contrary to Zimbabwean law, the newspaper said.

A police spokesman told it that Mr van Hoogstraten, of Uckfield, East Sussex, owns about 200 properties in Zimbabwe.

Zimbabwean law prohibits the use of foreign currencies for local goods and services.

Zimbabwean TV news bulletins showed Mr van Hoogstraten dressed in a white short-sleeved shirt, as the bundles of money allegedly found at his house were carried out by police.

"The police informant had been asked to pay in the region of US$8,000," Mr Bvudzijena added.

"Van Hoogstraten is being charged under the Exchange Control Regulations for charging a service and dealing foreign currency.

"He is also facing charges under the Censorship Act."

In 2002 a British court convicted Mr van Hoogstraten of manslaughter and sentenced him to 10 years in jail after a business associate was shot and killed.

Mr van Hoogstraten appealed against the conviction and was cleared in 2003, although in 2005 a civil court awarded the murdered man's family £6m in damages.

He doesn’t own them, really, not in the “peoples’ paradise” of Zimbabwe.

He forget to bribe someone or are the Zim thugs looking to make one big score in ransom?

Yeah, if I had to guess, I’d say this is little more than a cover for them to take his money and his property.

If he’s stupid enough to invest in Zimbabwe, he can’t be much of a tycoon.

Yeah - but where else does he have a chance of being a gabillionaire?

Zimbabwe money is worthless, so the Govt. is using this excuse to steal His propertys.....God Help those People down there.

That Mugabe needs a permanent Vacation.

I’m reminded to be thankful that I’m an American citizen.

So his arrest is a seismic event.

Muggy needs to die for his racist crimes against blacks and whites. But he gets too much support from South Africa

He is or was a Mugabe supporter known for his “kill whitey” rhetoric. Too bad, nah.

Everyone will be eaten eventually.

Oh, my. They're starting to eat one another. I'm only surprised it took this long.

At some point Mugabe isn't going to be able to pay the army anymore. That's when things get really interesting.