Senator Inhofe showed Gore a film frame from “An Inconvenient Truth” where it asks viewers: “Are you ready to change the way you live?”

Gore has been criticized for excessive home energy usage at his residence in Tennessee. His electricity usage is reportedly 20 times higher than the average American household.

“There are hundreds of thousands of people who adore you and would follow your example by reducing their energy usage if you did. Don’t give us the run-around on carbon offsets or the gimmicks the wealthy do,” Senator Inhofe told Gore.

“Are you willing to make a commitment here today by taking this pledge to consume no more energy for use in your residence than the average American household by one year from today?” Senator Inhofe asked.

Cl As a believer: · that human-caused global warming is a moral, ethical, and spiritual issue affecting our survival;

· that home energy use is a key component of overall energy use;

· that reducing my fossil fuel-based home energy usage will lead to lower greenhouse gas emissions; and

· that leaders on moral issues should lead by example;

I pledge to consume no more energy for use in my residence than the average American household by March 21, 2008.”

Gore refused to take the pledge.

I hear al gore buys his carbon credits from manbearpig.

I have a new moniker for Gore... a Carbonista.

Worthy of a Barf Alert right there.

Unfortunately, this will never be carried by the DriveByMedia. What they WILL show is Barbra Boxer (D-CA) chastising Inofe by holding up the chairmans gavel and stating (I'm paraphrasing),"elections have consequences. You no longer have this."

Al Gore Jr. is selling indulgences for those who's sins are politically incorrect.

Did anyone ask Algore about teh Cape Wind Project?

10 posted on 03/21/2007 1:50:44 PM PDT by TexasCajun
[ Post Reply | Private Reply | To 1 | View Replies]
To: Dirtysnowbank
Typical liberal. Wants the governments hands in everybody's pockets for his pet projects but won't take responsibility for his own actions.

Gore is such a doofus he went out on "his" internet to check on his carbon credits at freecreditreport.com.

no highjacking the Algore "No pledge" thread

It's from an episode of southpark.

Algore came to the school to preach to the kids about manbearpig, a creature that sane people don't believe in (ala global warming)

The rest of the episode was spent ripping algore.

If you have cable, it's a must see episode.

I think it is from South Park.

typical lib double standard. one for the libs and another one for the rest of the American people

An episode of South Park had Gore trying to convince people that "manbearpig" was the biggest threat to the world... ever. He was serial about it! 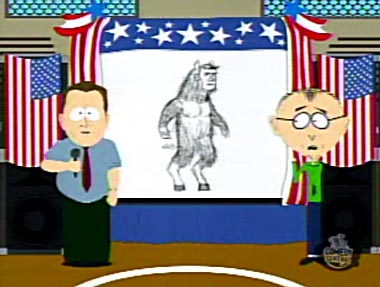 I live in CARBONdale, IL. So, I know... some of those smart students on campus have seen manbearpig. They know the truth, man.