HRC: Homosexuality Is Not Immoral [Hillary Clinton barf alert]
The Hotline ^ | March 15, 2007 | The Hotline On Call

"Well I've heard from a number of my friends and I've certainly clarified with them any misunderstanding that anyone had, because I disagree with General Pace completely. I do not think homosexuality is immoral. But the point I was trying to make is that this policy of Don't Ask, Don't Tell is not working. I have been against it for many years because I think it does a grave injustice to patriotic Americans who want to serve their country. And so I have called for its repeal and I'd like to follow the lead of our allies like, Great Britain and Israel and let people who wish to serve their country be able to join and do so. And then let the uniform code of military justice determine if conduct is inappropriate or unbecoming. That's fine. That's what we do with everybody. But let's not be eliminating people because of who they are or who they love."

Now I'm a straight male, married with kids, I'm also a 8yr veteran of the USMC. I would have to let a lot of people know that the don't ask don't tell is working, I have met several servicemen that had turned out to be very good freinds, two of which were open to me when I was their supervisor, had told me that they have homosexual tendancies. They had turned out to be two of the hardest working, bravest men that I had met. Terrific Marines, true patriots, although I CERTAINLY DON'T share the same veiws as them, its like women in the military if they can perform the job, and are patriots that wish to defend their homeland, I say let them....... the veiws that they had and way of life they had chosen had never broke down our unit integrity or abilities, even when we were on ship for six months at a time..

Hillary and the distinction of moral and immoral long ago parted company. In her world, if you can get away with it, it's moral.

There were hundreds of responses yesterday to this article.

I just wonder when the tell all books will start to come out. The only question in my mind is whether she first started in Wellesley or sooner.

I agree with you completely. I spent about 9 years in various facets of the Army (Reserve, Active Duty, and National Guard). I've known some that I knew were gay, some that I only suspected, and likely some that I had no clue. It was never an issue, and never should be.

Sexual experiences have nothing to do with your role in the military-- and "Don't Ask, Don't Tell" applies (or should apply) both to heterosexuals and homosexuals. General Pace was right on the money.

The only people that say the "Don't Ask, Don't Tell" policy doesn't work are the rabidly homophobic, and the militant pro-gay movement. The rest of us wish they'd fight it out on some deserted island somewhere.

Just get a good, close, long look at her life. You will reach the conclusion that nothing is immoral so long as it furthers her ends. Shameful woman - why just look at how she abandoned Old Crusty after all those years just because he tried to get to the dry cleaners on his own one day. Shameful. The Few, The Proud, The Marines? LOL

"The heroes are the folks that we probably won't see in Time or Newsweek", said Donna Red Wing of the Human Rights Campaign.... Maybe folks like Williamson Henderson, who was inside The Stonewall and arrested after the first night of the rebellion (sic).... He'll never forget the night he helped give birth to the Gay Rights movement. Stonewall helped unite Gays and lesbians, eventually growing into a powerful force, felt in all reaches of the national spectrum. "Stonewall was the first time I saw in a public way my GLBT community fighting back", said Donna. And, from the S.V.A.'s Jeremiah Newton: "Yes, we were part of the Stonewall Rebellion. Yes, we survived. Yes, we're still here.... It starts with one person standing up for their rights and the rights of their loved ones. That's Stonewall! It's an amazing, amazing story...." reflected Jeremiah. Do they consider themselves 'heroes'? "Well, I never regarded myself as one", Williamson said. "None of us regarded ouselves as 'heroes'. We were all victims of happenstance", he said. "But, after all these years, I think, yes, in fact, we are 'heroes'".

Hay devoted his entire life to progressive politics, and in 1950 founded a state-registered foundation network of support groups for gays known as the Mattachine Society.

Hay was also a co-founder, in 1979, of the Radical Faeries, a movement affirming gayness as a form of spiritual calling. A rare link between gay and progressive politics

“Harry was one of the first to realize that the dream of equality for our community could be attained through visibility and activism,” said David M. Smith of the Human Rights Campaign in Washington, DC. “When you were in a room with him, you had the sense you were in the company of a historic figure.”

“Mattachine” took its name from a group of medieval dancers who appeared publicly only in mask, a device well understood by homosexuals of the 1950s. Hay devised its secret cell structure (based on the Masonic order) to protect individual gays and the nascent gay network. Officially co-gender, the group was largely male -- the Daughters of Bilitis, the pioneering lesbian organization, formed independently in San Francisco in 1956.

Though some criticized the Mattachine movement as insular, it grew to include thousands of members in dozens of chapters, which formed from Berkeley to Buffalo, and created a lasting national framework for gay organizing. Mattachine set the stage for rapid civil rights gains following 1969’s Stonewall riots in New York City.

NAMBLA emerged from the tumultuous political atmosphere of the 1970s, particularly from the leftist wing of the Gay Liberation movement which followed the 1969 Stonewall Riots in New York City. Although discussion of gay adult-minor sex did take place, gay rights groups immediately following the Stonewall Riot were more concerned with issues of police harassment, nondiscrimination in employment, health care and other areas. 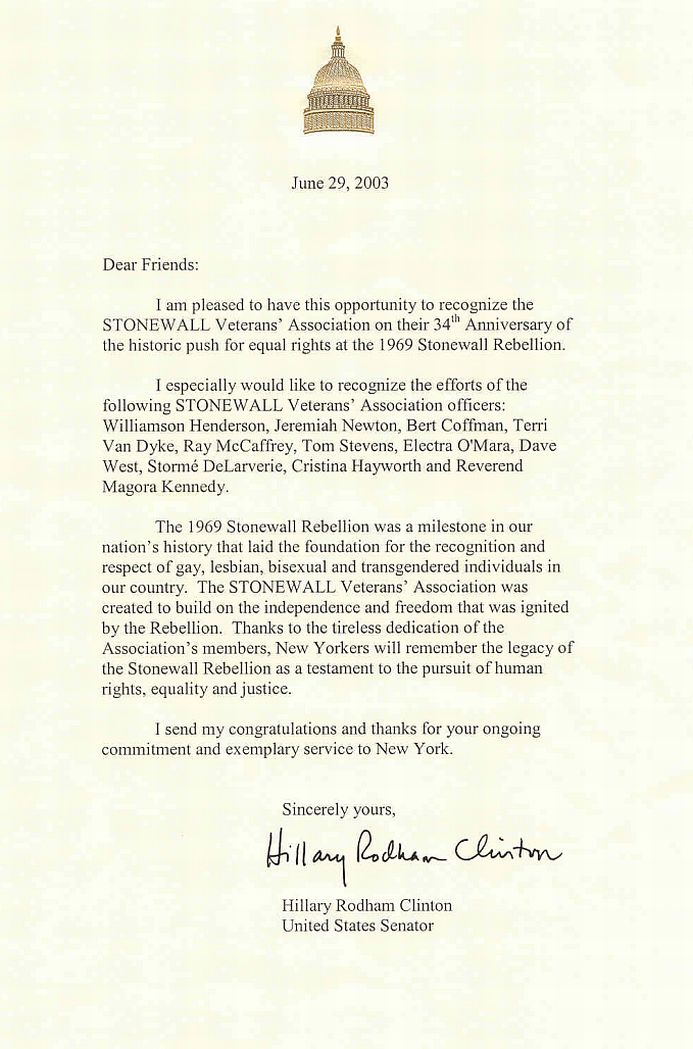 The Amsterdam News, a weekly New York newspaper, is leading the way with articles like "Black New Yorkers: 'Gayest great-grandmother in the country,'" (August 14, 2003) which profiles the life of Rev. Magora Kennedy, a former Black panther, a mother of 5 and grandmother of 15, and an out lesbian whose activism dates back to Stonewall. Special attention is also paid to youth issues in "Kids with gay parents talk about their families" (May 12-May 18, 2005).

Oh look a guppy and it's mate.

And oral sex is not sex depending on what the meaning of is is. Hillary can't lie as well as Bubba.

Already did, and it was IGNORED BY THE MEDIA. (and it was written by a lib!)

15 posted on 03/16/2007 7:24:11 AM PDT by SoFloFreeper
[ Post Reply | Private Reply | To 6 | View Replies]
To: seanmerc
Whether homosexuality is immoral or not is decided by society as a whole and not by individuals. Down through the centuries, in every land and place, in every culture and civilization, homosexuality has been held to be immoral.

The thought of this vile creature in charge of the U.S. military ought to be enough to make anyone who loves America feel like vomiting

Interesting that Hillary is against Don't Ask , Don't Tell. Because that was the Clinton-era compromise about gays in the military. So on this issue, she can brag that she is independent of her husband. And she might do so.

After all, we've heard a lot in her campaign so far talking about how wonderful the Clinton administration was on various issues. So if anybody says she's parrotting back Clinton era issues, on this issue she can say she made up her own mind.