On 9-10 May of this year, Senator Edward Kennedy’s close friend and trusted confidant J. Tunney was in Moscow. The senator charged Tunney to convey the following message, through confidential contacts, to the General Secretary of the Central Committee of the Communist Party of the Soviet Union, Y. Andropov:

Senator Kennedy, like other rational people, is very troubled by the current state of Soviet-American relations. Events are developing such that this relationship coupled with the general state of global affairs will make the situation even more dangerous. The main reason for this is Reagan’s belligerence, and his firm commitment to deploy new American middle range nuclear weapons within Western Europe.

According to Kennedy, the current threat is due to the President’s refusal to engage any modification on his politics. He feels that his domestic standing has been strengthened because of the well publicized improvements of the economy: inflation has been greatly reduced, production levels are increasing as is overall business activity. For these reasons, interest rates will continue to decline. The White House has portrayed this in the media as the “success of Reaganomics.”

Naturally, not everything in the province of economics has gone according to Reagan’s plan. A few well known economists and members of financial circles, particularly from the north-eastern states, foresee certain hidden tendencies that may bring about a new economic crisis in the USA. This could bring about the fall of the presidential campaign of 1984, which would benefit the Democratic party. Nevertheless, there are no secure assurances this will indeed develop.

The only real potential threats to Reagan are problems of war and peace and Soviet-American relations. These issues, according to the senator, will without a doubt become the most important of the election campaign. The movement advocating a freeze on nuclear arsenals of both countries continues to gain strength in the United States. The movement is also willing to accept preparations, particularly from Kennedy, for its continued growth. In political and influential circles of the country, including within Congress, the resistance to growing military expenditures is gaining strength.

However, according to Kennedy, the opposition to Reagan is still very weak. Reagan’s adversaries are divided and the presentations they make are not fully effective. Meanwhile, Reagan has the capabilities to effectively counter any propaganda. In order to neutralize criticism that the talks between the USA and the USSR are non-constructive, Reagan will grandiose, but subjectively propagandistic. At the same time, Soviet officials who speak about disarmament will be quoted out of context, silenced or groundlessly and whimsically discounted. Although arguments and statements by officials of the USSR do appear in the press, it is important to note the majority of Americans do not read serious newspapers or periodicals.

Kennedy believes that, given the current state of affairs, and in the interest of peace, it would be prudent and timely to undertake the following steps to counter the militaristic politics of Reagan and his campaign to psychologically burden the American people. In this regard, he offers the following proposals to the General Secretary of the Central Committee of the Communist Party of the Soviet Union Y.V. Andropov.

1. Kennedy asks Y.V. Andropov to consider inviting the senator to Moscow for a personal meeting in July of this year. The main purpose of the meeting, according to the senator, would be to arm Soviet officials with explanations regarding problems of nuclear disarmament so they may be better prepared and more convincing during appearances in the USA. He would also like to inform you that he has planned a trip through Western Europe, where he anticipates meeting England’s Prime Minister Margaret Thatcher and French President Mitterand in which he will exchange similar ideas regarding the same issues.

If his proposals would be accepted in principle, Kennedy would send his representative to Moscow to resolve questions regarding organizing such a visit.

Kennedy thinks the benefit of a meeting with Y.V. Andropov will be enhanced if he could also invite one of the well known Republican senators, for example, Mark Hatfield. Such a meeting will have a strong impact on American and political circles in the USA. (In March of 1982, Hatfield and Kennedy proposed a project resolution to freeze the nuclear arsenals of the USA and the USSR and published a book on this theme as well.)

2. Kennedy believes that in order to influence Americans it would be important to organize in August-September of this year, televised interviews with Y.V. Andropov in the USA. A direct appeal by the General Secretary of the Central Committee of the Communist Party of the Soviet Union to the American people will, without a doubt, attract a great deal of attention and interest in the country. The senator is convinced this would receive the maximum resonance in so far as television is the most effective method of mass media and information.

If the proposal is recognized as worthy, then Kennedy and his friends will bring about suitable steps to have representatives of the largest television companies in the USA contact Y.V. Andropov for an invitation to Moscow for the interviews. Specifically, the president of the board of directors of ABC, Elton Raul and television columnists Walter Cronkite or Barbara Walters could visit Moscow. The senator underlined the importance that this initiative should be seen as coming from the American side.

Furthermore, with the same purpose in mind, a series of televised interviews in the USA with lower level Soviet officials, particularly from the military would be organized. They would also have an opportunity to appeal directly to the American people about the peaceful intentions of the USSR, with their own arguments about maintaining a true balance of power between the USSR and the USA in military terms. This issue is quickly being distorted by Reagan’s administration.

Kennedy asked to convey that this appeal to the General Secretary of the Central Committee of the Communist Party of the Soviet Union is his effort to contribute a strong proposal that would root out the threat of nuclear war, and to improve Soviet-American relations, so that they define the safety of the world. Kennedy is very impressed with the activities of Y.V. Andropov and other Soviet leaders, who expressed their commitment to heal international affairs, and improve mutual understanding between peoples.

The senator underscored that he eagerly awaits a reply to his appeal, the answer to which may be delivered through Tunney.

Having conveyed Kennedy’s appeal to the General Secretary of the Central Committee of the Communist Party of the Soviet Union, Tunney also explained that Senator Kennedy has in the last few years actively made appearances to reduce the threat of war. Because he formally refused to partake in the election campaign of 1984, his speeches would be taken without prejudice as they are not tied to any campaign promises. Tunney remarked that the senator wants to run for president in 1988. At that time, he will be 56 and his personal problems, which could hinder his standing, will be resolved (Kennedy has just completed a divorce and plans to remarry in the near future). Taken together, Kennedy does not discount that during the 1984 campaign, the Democratic party may officially turn to him to lead the fight against the Republicans and elect their candidate president. This would explain why he is convinced that none of the candidates today have a real chance at defeating Reagan.

President of the committee V. Chebrikov

It was unearthed by a Times of London reporter in the 90s after the KGB files were opened.

Previous Threads with only the outlines or mentions:

Tunney remarked that the senator wants to run for president in 1988. At that time, he will be 56 and his personal problems, which could hinder his standing, will be resolved...

I'm sure the anti-communism sentiment of the time was very distressing to Kennedy.

Should have been locked up for murder.
Now, should be tried, and if found guilty shot for treason.

...I would like to talk, representing all those veterans, and say that several months ago in Detroit, we had an investigation at which over 150 honorably discharged and many very highly decorated veterans testified to war crimes committed in Southeast Asia, not isolated incidents but crimes committed on a day-to-day basis with the full awareness of officers at all levels of command..

They told the stories at times they had personally raped, cut off ears, cut off heads, taped wires from portable telephones to human genitals and turned up the power, cut off limbs, blown up bodies, randomly shot at civilians, razed villages in fashion reminiscent of Genghis Khan, shot cattle and dogs for fun, poisoned food stocks, and generally ravaged the countryside of South Vietnam in addition to the normal ravage of war, and the normal and very particular ravaging which is done by the applied bombing power of this country...... 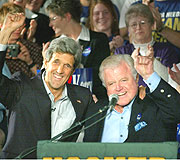 John Kerry and Ted Kennedy have known each other for 33 years. AP file.

Perhaps someday this man will be held responsible for his crimes.

Thank you for the links.

Good find. I don't recall seeing this in any main stream media publications after the iron curtain fell. Kennedy is, and always has been a traitorious and self serving POS.

. . .find it amazing that it has remained below political horizon, so to speak; and for this long . . . (but then; what is not amazing when it comes to Demrat politics). Seems, even this running once. . .say as even a full or half-page political ad, prior to an Election might have taken a toll on Kennedy or some other Demrat out there.

Can only imagine their correspondence with their Arab friends these past years.

But really; do our Dems-for-Totalitarianism, not deserve a 'show and tell'

18 posted on 12/31/2006 5:55:11 AM PST by cricket (Save a Terrorist - join the Democrats/Live Liberal Free; or suffer their consequences)
[ Post Reply | Private Reply | To 1 | View Replies]
To: cricket
.....Can only imagine their correspondence with their Arab friends these past years.

this murderous fat piece of shi-ite.....the article once and for all points to his treason....like all lib/dems..he would sell out his country for power!!!!!

not one of the kennedy's ever amounted to anything good for this nation....his brother jfk ran a failed presidency/his brother rfk...contributed little to anything...and fat ted should have been in jail for manslaughter rather than drunk in the senate!!...the lib/dem msm always has tried to portray this shi-itey american family as royality....the father (anti-semetic - hitler supporter) made millions as a rum runner and got an appointment to the court of st. james by that money! His spawn was no better!!!!

screw the kennedys - one and all....they are a blight on america and have contributed to its downward spiral!!!