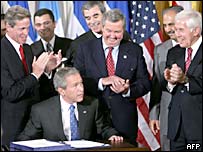 Bolton to the UN

Has CONSTRUCTION in process on the second group of eight ABM silos in Alaska and California so that America has a land-based defense (in addition to our sea-based SM-3 and AEGIS systems) of 18 ABM's against North Korean nukes (note: China itself currently only has 24 -out of several hundred- nuclear ICBM's capable of reaching the U.S.)

US rules out extra pledges on global warming

Executive Order: Protecting the Property Rights of the American People


By the authority vested in me as President by the Constitution and the laws of the United States of America, and to strengthen the rights of the American people against the taking of their private property, it is hereby ordered as follows:

Section 1. Policy. It is the policy of the United States to protect the rights of Americans to their private property, including by limiting the taking of private property by the Federal Government to situations in which the taking is for public use, with just compensation, and for the purpose of benefiting the general public and not merely for the purpose of advancing the economic interest of private parties to be given ownership or use of the property taken.

Sec. 2. Implementation. (a) The Attorney General shall:

(i) issue instructions to the heads of departments and agencies to implement the policy set forth in section 1 of this order; and

(ii) monitor takings by departments and agencies for compliance with the policy set forth in section 1 of this order. ...

Algeria has held its first competitive presidential election, and the military remained neutral.

The United Arab Emirates recently announced that half of its seats in the Federal National Council will be chosen by elections.

Kuwait held elections in which women were allowed to vote and run for office for the first time.

Implemented "clean diesel" EPA mandates that reduce diesel air pollution by up to 97% as well as enable U.S. refiners to profitably use U.S. coal or natural gas to produce diesel in a move that aids our environment as well as enables the U.S. to gradually wean itself from Middle-East oil

He isn't perfect, and he isn't king, but for the most part, he has 'done good'.

IOW, he can win the battles, but lose the war? As was said on another thread, the incompetence at getting the message out is just astonishing and gives credence to the idea that his true agenda are directed at globalization, not American strength.

Great work and I appreciate it.

Thank you, Southack. I had saved your list and put a large section of it on a thread where some idiot said Bush hadn't done anything. I was so glad you had previously posted it. Keep doing that. We need to have the info at our finger tips.

Great info in your reply. Thanks for posting that.

Thank you, Southack..God Bless Our President.

All of what you say is true.

But his legacy, unfortunately, will be linked to handing America over on a silver platter to the foreing aline invaders - and having lost the Iraqi war because of a failure to carry through with the job in Iran and Syria and getting waylaid into trying to conduct a social experiment in Iraq.

Also, some of his accompolishments - like Alitto - were actually coherced by his core base, which he has demonstrated a unique talent in alienating over many issues.

Wow. My hat is off to you, sir, for that absolutely amazing post.

That would make a great documentary. I hope that the MSM will make it soon and show it often ;)

His main weakness is in vocalizing his many contributions to our society, if he could he would be held in near Reagan in esteem.

Bump for your excellent addition to this thread

Just booked marked it for all the great references.