Geologists have discovered a striking archaeological feature on a hillock in the Kutch district of the western Indian state of Gujarat.

The feature has evoked the curiosity of archaeologists because such signs have mostly been observed so far in Peru.

The team, led by Dr RV Karanth, a former professor of geology at the Maharaja Sayajirao University in Vadodara, Gujarat, has been involved in a palaeoseismological study of the Kutch region for the past 11 years.

Palaeoseismology involves the study of sediments, landforms and other geological evidence of past earthquakes to unravel their history and determine the nature and occurrence of present-day earthquakes.

This feature was discovered at a hillock 3km from the sleepy oasis township of Khavda, which is also known as the gateway to the Rann of Kutch, an extensive salt marsh of western India and southeast Pakistan between the Gulf of Kutch and the Indus river delta.

The Kutch region is host to several archaeological findings belonging to the Harappan civilisation (3000-1500 BC).

This has led to the speculation that this feature could be related to the Harappan civilisation.

Dr Karanth clarifies that it is too early to arrive at any conclusion.

"It could be a manmade feature or may have been formed naturally due to erosion of the hill slope along a fracture formed by the movement of earth's crust," he says.

"However structures formed naturally due to erosion generally tend to be parallel to each other. But here, all three arms are in different directions. Besides, all the ditches are almost uniformly wide and deep." 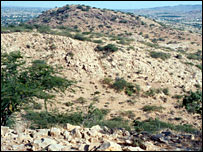 Geologists say the features could be 'man-made'

Dr Karanth says such trenches have not been noticed elsewhere in the region. Archaeologists, he says, can now pursue further research.

Geometric lines and animal shapes etched into the desert plain by people of the Nazca civilisation (AD 1-700) of Peru are well known.

"But such signs on hill-slopes have not been reported from Peru," says Dr Karanth.

He says that one of the prominent explanations given for the Peruvian features is that they may have been constructed to make astronomical observations and calculations.

"The Tropic of Cancer passes through Kutch. So if this structure is man-made, it is likely that the slope of the hillock was utilised for making certain astronomical calculations in the past," explains the geologist.

Interestingly, there are numerous indications to suggest that Harappans were well-versed in astronomy.

The straight streets of that time were oriented in the cardinal directions - east, west, north and south.

Dr Karanth has also discovered ruins of a fort-wall, houses, storage tank and a temple on the hilltop.

They may, he says, belong to the period of the Kathi Darbar, a warrior class from the Kathiawad region. 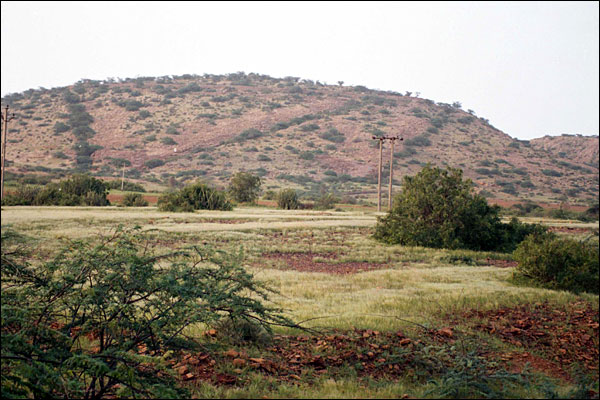 Is it manmade or similar to the Bosnian pyramid? Probably the latter.

Lost Civilisation From 7,500 BC Discovered Off Indian Coast

Maybe Columbus was right to refer to them as "Indians" after all.

"But such signs on hill-slopes have not been reported from Peru," says Dr Karanth.

Got me started looking for a photo of the immense large cross/tree - like marking that is visible (from the sea) on a south American hillside. I haven't found it yet, but, my search turned up this source of beautiful IKONOS satellite views of major ancient sites:

If you haven't seen it yet, it is definitely worth a visit...

Here's the "Candelabra of the Andes":

And then there's this guy on a hillside near Pisco, Peru...

I'm not terribly impressed. Astronomy is critical for any primitive agricultural society. It is life and death to know when to plant. But there are limited means you can use for your observations, so no surprise when similar conclusions are reached.

I suspect that sculpted land forms were much more common than they are today. The major known sets are in a South American desert and the Ohio River Valley. These may have had any number of mundane or religious uses, ie. road signs, ceremonial places. In intensively used landscapes, these would likely be plowed under and destroyed within a eneration of their prvious use ending.

14 posted on 08/04/2006 1:02:48 PM PDT by Fraxinus
[ Post Reply | Private Reply | To 1 | View Replies]
To: blam
On Thu, 24/9/09, r_v_karanth@yahoo.co.in wrote to Dr.Bhudia: You may be right. I had also given the explanation that tectonic activity could be a reason. However, there appears to be some human intervention. The tectonic fractures are somewhat oblique to these channels. Could this be a sort of sign to attract the attention from a distance? The ancient constructions above this hill are now destroyed. One arm of this structure (middle one) is also destroyed for taking out stone blocks. -RV Karanth Thu, 24/9/09, Dr Bhudia Kutch Science Foundation kutchsciencefoundation@hotmail.com wrote: From: Dr Bhudia Kutch Science Foundation Subject: RE: Lat-Long of "VI" hill To: "MS GADHVI" msgadhvi@rediffmail.com, "Viswanatha Karanth" r_v_karanth@yahoo.co.in, "drbhudia@yahoo.co.uk" drbhudia@yahoo.co.uk Date: Thursday, 24 September, 2009, 4:53 PM KHAVDA VI @ Paccham Raimalro Hill Dear Dr karanth saab, and MS GADHAVI Thank you for forwarding the Long Lati of "V I" Sign at the Place Raimalro Hill@ Khavda some calculative measurements and interpretation is attache, please correct if any errors. Yours dr Bhudia Do visit our ABOVE Clubs/Groups of Science Groups of India. "V I" Sign seen @ 23.857380 N 69.757579 E on the Paccham Raimalro Hill near khavda 3km as shown on the map. The sign Geo-trigonometric interpretation measured by satellite readings is as follows. All lines in the Sign has direction away from the North Pole and line AB 780' makes angle of about 30NE, where angle B is about 45 and line DE is not parallel to any other lines. Measurement line AB = 780 feet, line BC is 750 feet and AC is 600 feet apart, line DE is 730 feet Height A=335feet, B & E=215 feet, C=350 feet and D = 337feet from sea level Height difference B to A is 335-215=120 height of the hill at distance 780 feet of B to A. This makes inclination of height of the hill at B to A = sign Θ = 120/780 =0.15 where anti sign shows angle of 8.9 ONLY But we can not ignore a "Nenu Ni DHAR" civilisation near Khavada 1.5km @ 23.51N - 69.44E. Which make no relations to angle of Earth axis nor to direction to pole or pole star in the sky. Which makes me to think that it has not any geometric or astronomical relations but may be some tectonic marks of previous tectonic activity at the place? Dr.BHUDIA-Science Group Of INDIA. uk.groups.yahoo.com/group/venustransit_2004/ President:'Kutch Science Foundation'. Founder :'Kutch Amateurs Astronomers Club - Bhuj - Kutch'. Life Member:'kutch Itihaas Parishad'. kutchscience@yahoo.co.in, kutchscience@hotmail.com, uk.geocities.com/wildlifeofkutch/ in.groups.yahoo.com/group/scienceclubofindia in.groups.yahoo.com/group/kutchscience in.groups.yahoo.com/group/kachchh in.groups.yahoo.com/group/bhuj Date: Tue, 22 Sep 2009 10:39:29 +0000 To: kutchsciencefoundation@hotmail.com Subject: Re: Lat-Long of "VI" hill From: msgadhvi@rediffmail.com CC: r_v_karanth@yahoo.co.in Dear Sir, Best wishes for your USA visit. Presently I have to work hard L. D. Engg. College to prepare lecture notes and PowerPoint presentations. Rest is fine. The VI hill is located at Lat: 23.857380 N Long: 69.757579 E Regards, Mahendra Dear Dr. Bhudia, Thanks for your mail and for sending scanned copy of toposheet of Khavda area. I can observe that the VI hill is named as Raimalro Hill on the toposheet you have attached with your mail and is located 3 km away from Khavda in NE direction. Regards, M. S. Gadhavi Dear Dr. Bhudia, Here is the lat-long of the hill sent by MSG: The VI hill is located at Lat: 23.857380 N Long: 69.757579 E -RV Karanth
15 posted on 09/27/2009 6:27:02 PM PDT by ScienceGroupOfINDIA (DR BHUDIA - SCIENCE GROUP OF INDIA)
[ Post Reply | Private Reply | To 2 | View Replies]
To: ScienceGroupOfINDIA; SunkenCiv
Welcome Dr Bhudia. I am happy to see you at Free Republic.

Are you doing work at (VI Hill) Raimalro Hill?

There are many, many things done by man under the water near Kutch.