DFU SONG: Don't Fear the Reaper (but the lefties should fear Ann Coulter and her FReepers)
DFU SONGS | 6-2006 | Lyrics, Doug from Upland

Ann is set to go...on the Leno show
Thank goodness there are some FReepers
There will be no pie throwing tonight (thanks to the FReepers)
Cover Annie (those are the FReepers)
She will kick liberal butt (do not mess with FReepers)
Leno knows he's overmatched (watch out for FReepers)
He knows in his gut

She dropped her house down...on the mainstream clowns
They do not know what had hit...they fight as if they're disarmed
(Annie has the FReepers) She smacked the Jersey Girls
(Covered by the FReepers) The Godless left is so alarmed
(She can count on FReepers) They think that what she's done is so Hitlerian
(She's got the FReepers) Come on, Annie
(Urged on by FReepers) Keep on ripping 'em good
(For cheering FReepers) It's fun to see them cry
(Oh, those mean FReepers) Yes, you know that you should

Leno knew the score...Annie slammed the door
George Carlin was quiet and mesmerized...we hoped that he hadn't expired
The liberals tasted their own medicine
In their mouth it was burning like a fire
Each day they are showing they hate America
(Watch out for FReepers) You go, Annie
We'll cover your back...kick 'em right in the teeth
Keep on speaking up for America
It's contempt they're beneath
(Watch out for the FReepers) Don't you ever stop
Until their heads pop

TOPICS: Culture/Society; Government; News/Current Events; Politics/Elections
KEYWORDS: anncoulter; coulter; crimesmisdemeanors; godless; gunowner; howtotalktoliberal; slander; treason
1 posted on 06/20/2006 3:42:44 PM PDT by doug from upland
[ Post Reply | Private Reply | View Replies]
To: RonDog
Watch, I am about to get my butt handed to me by a gun-owning, never back down blonde. 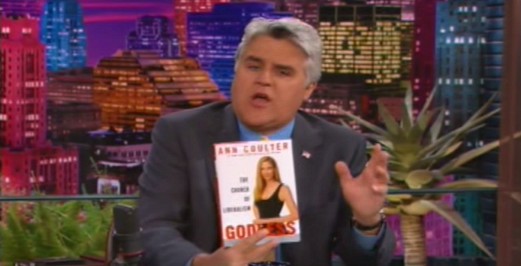 Ping. Your legend continues to grow.

You know what kind of hit me regarding that appearance with Ann that night? There was a true lack of liberals there to attack her in any significant numbers.

They had been there in some numbers in the past, but not this time at all.
What I am thinking though, is this a big indication that their whole darn base is broken up and not motivated to do anything about anyone at this time.
The lack of liberals IMO really means a good something for conservatives regarding what isn't happening these days on the liberal side.

I think it was great Freepers were there. I like especially like that there were good men there to watch/protect Ann as she gravitated around events related to the appearance.

Brilliant lyrics as usual! This book of Ann's is her best yet. I wish it could be required reading for all Americans!

Here's what really happened. There were a few of us, but just enough to set a tone. During the monologue, Jay was halfway thorough a joke and said that Rove was not indicted. We cheered wildly. He noted that there was right wing audience tonight. Not really. I think the leftists just decided not to cause trouble because they were not 100% of the audience. They actually had some opposition. About 10 people from Massachusetts sat around me who were there for a family reunion.

Liberals' nightmares are haunted by the Coultergeitst.