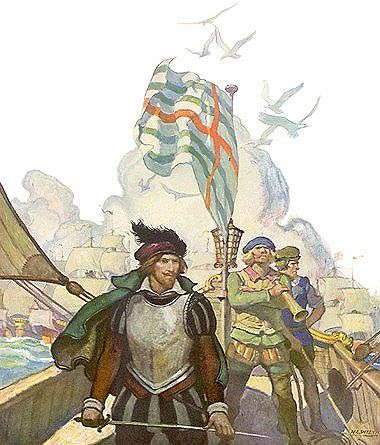 No innocent Indians being tormented and driven off of their lands?
42 posted on 04/07/2006 1:26:21 PM PDT by Robert A Cook PE (I can only donate monthly, but Hillary's ABBCNNBCBS continue to lie every day!)
[ Post Reply | Private Reply | To 41 | View Replies]
To: Pookyhead; Dark Skies

Unfortunately you are right.

My favorite, bar none. Rockwell is best known for light, sentimental pieces, but he wasn't afraid to turn his keen eye and vast talent to serious subjects, especially late in his career, when the civil rights movement stirred his conscience. His series on the Four Freedoms painted during the war is also some of his most stirring work.

"A forgery? That makes it sound like he made it to pull a scam. It is a COPY. Big difference."

Nah. He was pulling a scam right out of a Donald Westlake story. According to the article;

"Experts said Trachte probably made the copy in about 1973, when he and his wife were going through a bitter divorce. The settlement let him keep the Rockwell."

He did the paint-by-number version with the intent of defrauding an ex. Didn't need to, but could have. Anyone remember the Dortmunder story where the forged object was a statue and Dormunder has to steal it to keep the ex from realizing she had been shuffled the forgery?

47 posted on 12/01/2006 1:41:17 PM PST by No Truce With Kings (The opinions expressed are mine! Mine! MINE! All Mine!)
[ Post Reply | Private Reply | To 23 | View Replies]
To: AnAmericanMother
The artsy crowd looked down on "mere illustrators" - that being a person who earned his living by selling his paintings commercially instead of hanging them in galleries and waiting for museums or foundations or rich people to buy them.

Not to mention that the art world has fads and fashions like any other. Representational art was on the outs in the '40s and '50s -- all the cool kids were doing abstract expressionism. Rockwell's paintings tell a story, sometimes a very simple one, and often a warm and sentimantal one -- none of which were in favor at the time.

But as time has gone on, Rockwell, along with other storyteller-painters like Edward Hopper, and N.C. Wyeth, has come into greater favor among collectors and "serious" art scholars alike. Much like Dickens, dismissed in his own time as a writer of popular serials, is now taught as one of the greatest Victorian storytellers.

No matter how much time has gone by, Thomas Kincade will still be a hack.

I absolutely agree. All that nasty commercial "country" kitsch is to Rockwell as Kincade is to the Hudson River School.

49 posted on 12/01/2006 1:52:12 PM PST by AnAmericanMother ((Ministrix of Ye Chase, TTGC Ladies' Auxiliary (recess appointment)))
[ Post Reply | Private Reply | To 48 | View Replies]
To: kitkat; shhrubbery!; All
Right! And Rockwell never considered himself an artist. My guess is because the leftist art world didn't approve of his realism in art.

Rockwell was a very interesting man and an excellent artist. He called himself an illustrator and was the target of much crap from the art establishment.

Rockwell stuck his finger in their eyes by putting much in his illustrations that came from classical 'fine' art. Rosie the Riveter is the first one that comes to mind. It is an artistic satire on another famous work of art - which I cannot think of right now, of course. His self-portrait was another 'joke' he played on the establishment. It is filled with illusions to earlier 'art' works.

Call me a sentimental softie, but many of Rockwell's paintings - including this one - put a lump in my throat or bring a tear to my eye.

The kid reminds me a bit of Forrest Gump, that sweet innocent look.

I'm laughing because I got a reply to something I posted on 4/6/06, and I honestly thought, "I'm losing it! I don't even remember posting on Rockwell lately." LOL But your information is fascinating. I never knew Rockwell used classical references in his own work. I wish you could remember which classic Rosie the Riveter was patterned after. I can't even begin to think of one, but I'm sure you're right.

I know it's been a while since anyone posted to this thread, but have to let you know there is another NC Wyeth lover here. He is one of my favorite artists.

We're having this same discussion over again in a more recent posting of this same story here. The hidden painting sold for a substantial sum.

Have you seen any of his late easel paintings? Some look almost like a down-east Hopper . . . others like Winslow Homer.

56 posted on 12/01/2006 4:54:36 PM PST by AnAmericanMother ((Ministrix of Ye Chase, TTGC Ladies' Auxiliary (recess appointment)))
[ Post Reply | Private Reply | To 54 | View Replies]
To: No Truce With Kings
Well, let me just say that it sure is easy to read nefarious intentions into something like this without a shred of proof, long after the guy is dead and can't defend himself. So the "experts" think he "probably" made it to defraud the ex. Whoopee. If so, why didn't he just destroy the "forgery" after the divorce was finalized and he got to keep the original? Since folks apparently can read the guy's mind now that he's dead, maybe someone has an answer to that.

Anyway, this is kind of a semantical game now. It's a copy, and perhaps was intended as a forgery. Fine.

All these years I always focused on the little girl and never noticed the graffiti on the wall behind her. Probably a good thing.

I had the pleasure of working w/Rockwell's son when I worked for a company that became owner of Top Value Stamps. Rockwell did covers for the catalogs and we had the rights to those images along with the Rockwell estate. When companies wanted to a license an image, I worked w/the son to make sure it was an appropriate use of the image. (for example, a plate or calendar)

58 posted on 12/01/2006 5:26:37 PM PST by radiohead (Hey Kerry, I'm still here; still hating your lying, stinking, guts you coward.)
[ Post Reply | Private Reply | To 46 | View Replies]
To: radiohead
I had the pleasure of working w/Rockwell's son when I worked for a company that became owner of Top Value Stamps. Rockwell did covers for the catalogs and we had the rights to those images along with the Rockwell estate.

I heard a wonderful lecture two years ago. It was by an art history scholar and he showed slides of the Rockwell illustrations, side-by-side with the old masters.

I will try to figure out the Rosie the Riveter parallel old master. I do remember that his self portraid was a take-off on an old master and if you look at the picture there is something on the upper right hand side of his easel that was a symbolic jab at the art critics.

I'll go to google images and try to figure it out. (I hate going to google. They are liberals.)