The Organization of the Islamic Conference (OIC), a 57-member Muslim voting block, has called for the United Nations to take measures against what it calls "Islamophobia." The move is part of the fallout after Danish cartoons portrayed Muhammad in a negative light.

The OIC specifically asked for a U.N. declaration prohibiting the "defamation of all prophets and faiths."

Thomas Jacobson, representative to the U.N. for Focus on the Family Action, said that's not a proper role for the U.N.

"What the Arab nations are asking the U.N. to do is to protect them from any criticism against their religion. And that is not something that the U.N. should do," he said. "They should not be suppressing human rights, they were formed to protect and preserve human rights and to encourage countries to do the same."

Jared Leland, an attorney with the Becket Fund for Religious Liberty, said there is little chance the U.N. will adopt all the demands, which include a new definition of freedom of speech against religions.

I doubt that the United States would sign an international agreement binding them to something that, in essence, would place a burden or restrict First Amendment rights over here," he told Family News in Focus.

Walid Phares, author of "Future Jihad," said turning a theological issue into a political one would have serious fallout.

"If we open that Pandora's box," he said, "then all religious groups are going to come and transform all legal systems including international law into an arena of battles."

TOPICS: Culture/Society; News/Current Events
KEYWORDS: cartoons; denmark; expression; freedom; holland; india; islam; israel; religion; satire; un Navigation: use the links below to view more comments.
first 1-20, 21-27 next last
No one can do more to protect Muslims from criticism than Muslims themselves. They need to loudly and forcably condemn violent protest and terrorist activity.
1 posted on 02/23/2006 8:03:33 AM PST by Sopater
[ Post Reply | Private Reply | View Replies]
To: Sopater

I have a better idea...lets apply the existing UN guidelines regarding religious freedom on the islamic theocracies.

When is the UN going to do something about this:

Yemen - Bans proselytizing by non-Muslims and forbids conversions. The Government does not allow the building of new non-Muslim places of worship.

Kuwait - Registration and licensing of religious groups. Members of religions not sanctioned in the Koran may not build places of worship. Prohibits organized religious education for religions other than Islam.

Egypt - Islam is the official state religion and primary source of legislation. Accordingly, religious practices that conflict with Islamic law are prohibited. Muslims may face legal problems if they convert to another faith. Requires non-Muslims to obtain what is now a presidential decree to build a place of worship.

Algeria - The law prohibits public assembly for purposes of practicing a faith other than Islam. Non-Islamic proselytizing is illegal, and the Government restricts the importation of non-Islamic literature for distribution.

Jordan - Has the death penalty for any Muslim selling land to a Jew.

Sudan - Conversion by a Muslim to another religion is punishable by death.

Pakistan - Conversion by a Muslim to another religion is punishable by death. Bans proselytizing by non-Muslims. Christians regularly put in prison for charges of blasphemy.

Malaysia - Every baby born is automatically Muslim and it is illegal to ever change religions.

3 posted on 02/23/2006 8:05:18 AM PST by 2banana (My common ground with terrorists - They want to die for Islam, and we want to kill them.)
[ Post Reply | Private Reply | To 1 | View Replies]
To: Sopater
The Organization of the Islamic Conference (OIC), a 57-member Muslim voting block, has called for the United Nations to take measures against what it calls "Islamophobia."

I've got your "islamophobia" right here.

Coming soon to the UN:

Committee On The Universal Right Not To Be Offended.

8 posted on 02/23/2006 8:08:07 AM PST by Uncle Miltie (The Prophet Muhammed, Piss Be Upon Him)
[ Post Reply | Private Reply | To 1 | View Replies]
To: EBH
I have a better idea...lets apply the existing UN guidelines regarding religious freedom on the islamic theocracies.

They are being aided by a student group "Students Wildly Indignant about Nearly Everththing"..

..and this request sounds so unusual? 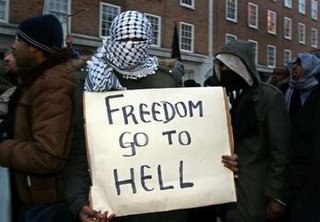 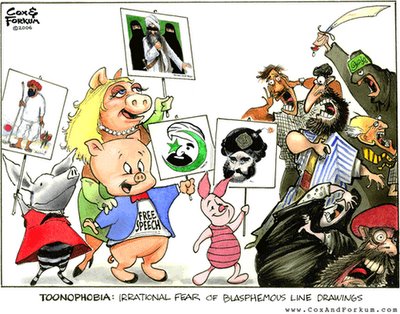 12 posted on 02/23/2006 8:11:34 AM PST by Andy from Beaverton (I only vote Republican to stop the Democrats)
[ Post Reply | Private Reply | To 1 | View Replies]
To: sheik yerbouty
They are being aided by a student group "Students Wildly Indignant about Nearly Everththing"..

Only because I thought "Famous Anus" would be using his own product..

Call the wambulance for the murderous muzzie garbage.

They provide so much fodder for criticism. Just to name a few, there's beheadings, there's honor killings, there's terrorism in general...

If Muslims want a better image, I suggest they clean up their act. Not that they'll listen to anyone who isn't preaching jihad.

17 posted on 02/23/2006 8:20:19 AM PST by MizSterious (Anonymous sources often means "the voices in my head told me.")
[ Post Reply | Private Reply | To 1 | View Replies]
To: Sopater
Meanwhile, other Muslims launch a denial of service attack on Michelle Malkin for her views. Oh the hypocrisy!

Yes, I know the site has been down all morning.

I will try to get back to work, but this has been a bit of a distraction.

Thanks for sticking with me.
18 posted on 02/23/2006 8:23:50 AM PST by TheForceOfOne (Memogate was Dan Rathers Little Big Horn, Buckhead has the scalp to prove it!)
[ Post Reply | Private Reply | To 1 | View Replies]
To: MizSterious
If Muslims want a better image

It's been a rather bloody 24 hrs., about par for the murderin' cultists.

If Allah "is" a God and doesn't like the presumed insults being hurled at a his alleged prophet and his goofy adherents-let him defend his own honor. If he is unable to do even that, how could he possibly convince 72 virgins to spend eternity with some idiot who blew himself to hell???