Mexican President Vicente Fox denounced as "disgraceful and shameful" on Wednesday a proposal to build a high-tech wall on the U.S.-Mexico border to stop illegal immigrants.

Concerned about the huge numbers of illegal immigrants streaming across the border and worried it could be an entry point for terrorists, a U.S. lawmaker has proposed building two parallel steel and wire fences running from the Gulf of Mexico to the Pacific Coast. But Homeland Security Secretary Michael Chertoff has said a wall running the length of a border would cost too much.

Mexico has expressed indignation at the idea.

Fox, speaking in Tamaulipas state across the border from Texas, said such extreme security measures would violate immigrants' rights.

"The disgraceful and shameful construction of walls, the increasing enforcement of security systems and increasing violation of human rights and labor rights will not protect the economy of the United States," he said.

He again called for the easing of U.S. immigration laws to benefit millions of undocumented Mexican fruit pickers, waiters and janitors working north of the border, a complex bilateral issue that has at times strained relations with Washington.

"I hope that next year we finally get an immigration agreement," Fox told immigrants crossing the border back to Mexico to spend the holidays with their families.

Each year, more than 1 million undocumented migrants try to slip across the rivers and deserts on the 2,000-mile (3,200-km) U.S.-Mexico border in search of work in the United States.

Many die en route in the searing desert heat.

Fox, speaking in Tamaulipas state across the border from Texas, said such extreme security measures would violate immigrants' rights.

Sign me up to tag it on our side.

Well, Fox Vincente should give those "immigrants" a place to work and live at his own house if he cares so much about them. He should quit trying to send his illegals over to us.

It'll actually be a relief when Mexico elects an actual leftist as president. Then, at least, we won't have to pretend that we're helping the pro-business, anti-corruption forces in that country by not protecting our borders.

5 posted on 12/15/2005 12:00:03 AM PST by Steve_Stifler
[ Post Reply | Private Reply | To 3 | View Replies]
To: West Coast Conservative
Disgraceful and shameful is what it is right now with illegals breaking our laws by busting our boarders and then they get here and think we owe them.

Fox wants to do something for the (undocumented workers) illegals, he should make an effort to clean up the corruption in his own country so all these people don't want to leave.

We are being invaded and he thinks trying to stop it is disgraceful and shameful.

Many die en route in the searing desert heat.

Obviously....the main purpose of the Wall is to save Mexicans
fro perishing in the deserts of El Norte .
What is so shameful about that Presidente Fox ?

just build the damn thing and get it over with.
Enough talk already.

Fox is a very happy man.

That is the most outrageous of many outrageous statements Fox has made. Illegals Rights??? We cannot protect our economy??? Unfortunately, this BS will go unanswered except here on FR. 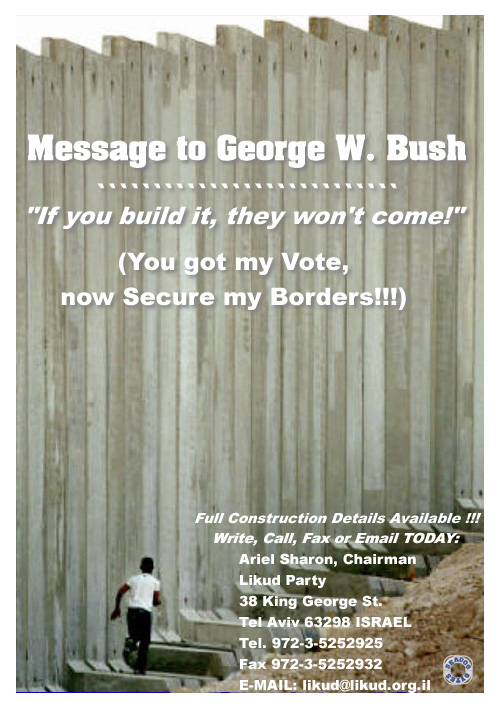 I'll even volunteer my time to help build it!

Each of Mexico's 47 consulates in the United States has a mandate to introduce Mexican textbooks into schools with significant Hispanic populations. The Mexican Consulate in Los Angeles showered nearly 100,000 textbooks on 1,500 schools in the L.A. Unified School District this year alone...

The Mexican sixth-grade history book celebrates the troops who fought the Americans during the Mexican-American War. But "all the sacrifices and heroism of the Mexican people were useless," recounts the chronicle. The "Mexican people saw the enemy flag wave at the National Palace." The war's consequences were "disastrous," notes the primer: "To end the occupation, Mexico was obligated to sign the treaty of Guadeloupe-Hidalgo," by which the country lost half its territory to the United States.

Study exercises that include discovering "what happened to your territory when the U.S. invaded" don't clarify things. The textbook concludes by celebrating Mexican patriotic symbols: the flag, the currency and the national anthem.

What in the HELL is wrong with our national government??

How is it we continually follow idiots? Steel fences in an age of red light cameras??? High speed toll booths & speed trap technology that can almost smell your speed?? It's not 1945 anymore.

Also, Screw Vincente, we could care less what he says, does, thinks, or eats.

If we wanted to secure the border we would. All this grand standing and BS oneupmanship is getting old. Our politicians do not want to secure the borders. They have given us BS reasons as to why. And we're all still scratching our heads when we should be calling for someone elses!