Torture is accepted and even expected in the Arab world. Yes, I know what you're thinking-that's not politically correct in most mainstream media. And you know some nice Arabs who have immigrated to America. But it's the truth in the Arab world. Might makes right. Real men don't eat quiche. They prove their manhood by the way they treat their enemy. After all it's what Muhammad did to the unbelievers - Christians, Jews and Zoroastrians in the Quoran - the 'holy book' allegedly mishandled in Guantanamo prison.

Arab Muslim men gain honor by shaming, belittling, abusing and torturing their enemy in the most horrific ways. Just look at how the Palestinians treat so-called collaborators by disemboweling them and hanging them upside down in Manger Square in Bethlehem. Look at the terrorist torture chambers that the coalition forces recently uncovered in Iraq.

When people refer to the prisons of Saddam Hussein and his regime they think he is the extreme exception. Not! The truth is his torture tactics are quite the norm in the Arab world. If you want to see torture that is beyond what any Westerner can ever imagine please go to _www.masada2000.org/impalement.asx_ (http://www.masada2000.org/impalement.asx) . Yes, you read it right, impalement. You'll get a glimpse of what the Arabs do to their own people.

As someone who came from the Arab world and knows how they think, it frustrates me to see self-appointed righteous minded politicians and media pundits oblivious to Arabic culture and thinking, criticizing America's actions at Guantanamo. These are a bunch of al Qaeda jihadists who were captured while bent on killing us - the kaffirs or 'unbelievers. They laugh watching our government bend over backwards, forwards and sideways trying to appease the critics. The more we stumble over ourselves questioning our goals and tactics, the more they think we are weak and easy to defeat.

They smirk because they believe that Americans have demonstrated how stupid and weak they are by caving in to stories about maltreatment of Guantanamo detainees. They are watching our critics in this country and counting on them to embolden the radical Islamic cause and weaken our resolve.

Actually, Gitmo is a joke as far as the Arabs are concerned. Prison? You call that a prison? Let me tell you what some of the prisoners call Guantanamo, "Al muntazah al-dini lilmujaheden al Muslimin," The Religious Resort for Islamic Militants.

They are given three halal meals a day in accordance to their religious dictates. How many kosher prisons are there in the Arabic world? None. Jews captured in the Arab world are butchered like those obscene pictures taken in Ramallah during the frenzied slaughter of two Israeli reservists who got lost. Remember the Palestinian man holding his red, Jewish blood dripping hands, high above his head in victory? Remember Nick Berg's head being held high also?

Most of these detainees never had three meals a day in their entire life. They are gaining weight, and are living in what they refer to in Arabic as "Al-Jannah," paradise. They have radio, television, soccer games, air-conditioning, clean clothes, servants, meaning American GIs, who wait on them hand and foot. They have Islamic chaplains and handed Qu'rans, the social hate guide against Infidels, by people so concerned as not to offend that they wear latex gloves and carry the book with two hands.

Many Muslims in the Middle East would gladly give up their poverty, dictatorial governments, corrupt leaders and social bondage to enjoy the relative luxuries Guantanamo offers. They have free medical care, better than millions of uninsured Americans and our military men and women serving on the jihadists' battlefield. Some of them who couldn't afford to see an optometrist now have glasses and can see and read their Qu'ran. Others who never had the opportunity to see a dentist now have a free dental plan. It has become such a joke; we even stop interrogations to let them take prayer breaks demanded by their religion.

As an Arab, I can tell you that Illinois Democratic Senator Richard Durbin is aiding and abetting the goals and strategy of Islamic jihadists who have declared war on the United States. Where was Durbin's comparison to the Nazis when we found the torture chambers in Iraq? Where was Durbin's comparison to Soviet gulags when we found the hundreds of thousands of bodies in Saddam's mass graves?

Where was Durbin's head when he compared prisoners captured on the field of battle to the internment of Japanese American civilians during WWII? OK, apologize to unarmed citizens, not fighters with weapons in their hands. Where was Durbin when he compared Gitmo and Abu Ghraib to the industry of death that murdered 6 million Jewish men, women and children during WWII? If anything his heart and mind were in the jihadists terrorists' camp. If you see what story is being downloaded and shared by viewers of the al Jazeera web site you will find the story on Durbin's comments the winner.

If I were an Islamic terrorist I would be thanking Durbin and forwarding his views to all my fellow fanatics. His reckless comments fuel the fanatic frenzied jihadists, motivating them to blow themselves up in the midst of innocent civilians, savagely cut the heads of helpless hostages and devote themselves to killing the infidel who could be your neighbor stationed in Iraq. Just like the Quran says they should.

Dick Durbin is an unwitting champion of Islamic radical fundamentalists. His comments should be known from this day forward as a "Durbinization" of the facts. To demonize something grossly out of proportion to what the enemy is doing is to Durbinize. Gitmo and Abu Ghraib have been Durbinized and the Arab world loves it. They laugh at Durbin because he's supporting their belief in the destruction of our country and civilization.

The shame is Durbin doesn't have a clue as to what he's done. As far as he's concerned, he did the right thing for the Islamic radical detainees living high on the proverbial hog in Gitmo. What he really did was made them laugh. Laugh at us for being fools and not real men. Now it's time to see if the voters in Illinois and his fellow members of Congress are men and women enough to tell the Moslem world Durbin isn't our real man.

Brigitte Gabriel is the former news anchor of World News for Middle East television, and now a Contributing Editor of FamilySecurityMatters.com and the founder of AmericanCongressforTruth.com

TOPICS: News/Current Events
KEYWORDS: arabworld; islam; muslim; trop; worldopinion
Brigitte Gabriel is the former news anchor of World News for Middle East television, and now a Contributing Editor of FamilySecurityMatters.com and the founder of AmericanCongressforTruth.com.As a child, Gabriel's own home was destroyed by radical islamists because she was a Christian. She spent 2 1/2 months in the hospital and then lived under the ground for 7 years with no electricity and little food. THEN she rose to become a news anchor, and then to the States where she's a true American success story - has her own business, two American kids, etc.

The leftwing media is our worst enemy. Without it our other enemies would be trivial.

And just where did the notion come from that the average American cares what Arabs think? Actually they think whatever the Koran tells them to think.

The Koran tells them to convert or kill. 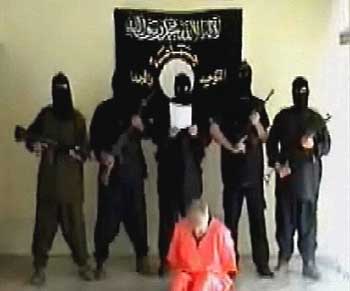 Now now.. let's be honest. Slavery IS another option. :-)

This assumes that Arabs think, an invalid assumption IMO.

Is Paris Burning? ( Religion of Peace® Alert )
Click the picture:

Too bad that statement is FALSE!

"As an Arab, I can tell you that Illinois Democratic Senator Richard Durbin is aiding and abetting the goals and strategy of Islamic jihadists who have declared war on the United States."

Among many other reasons, the way our Senate handled (or mishandled) "Durbin the Turban" is the single biggest reason I have come to distrust our Senate completely. But it goes beyond simple "distrust". It's a fear that our Senate has become one of the most corrupt and self-serving political bodies in the world. Right down there with the UN.

I only took four posts before someone read my mind.

Who cares what they think.

Go to this link: http://www.masada2000.org/impalement.asx That brings home the point the lady is making quite clear!!