Two political action committees linked to House Minority Leader Nancy Pelosi have been charged with attempting to circumvent to legal limits on campaign giving, the Federal Election Commission has ruled.

According to the March 2004 FEC finding, Pelosi appears to have violated the same kind of arcane campaign finance regulation that spurred the indictment of House Majority Leader Tom DeLay this week.

The San Francisco Chronicle explained at the time:

"The FEC ruled that two Pelosi political action committees created to help Democrats in the 2002 elections were related instead of being independent and therefore violated a rule against giving more than the maximum $5,000 annual contribution."

Mr. DeLay, by then under investigation for his own campaign finance problems, reacted sharply to the news about Pelosi's campaign finance irregularities, saying: "She has violated the law. It's in the facts."

According to the Pittsburgh Tribune-Review, Team Majority reported 16 contributions of $5,000 each from donors who had already given the maximum to Pelosi's other PAC. Five of the donors gave to both PACs on the same day.

Rather the refer the case to the Justice Department for prosecution, however, the FEC allowed Pelosi's two committees to negotiate "conciliation agreements" under which they were fined a total of $21,000. 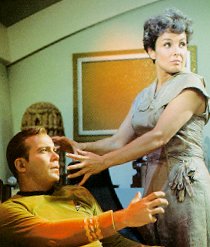 2 posted on 10/01/2005 12:09:39 PM PDT by rellimpank (urbanites don' t understand the cultural deprivation of not being raised on a farm:NRABenefactor)
[ Post Reply | Private Reply | To 1 | View Replies]
To: InvisibleChurch
Rather the refer the case to the Justice Department for prosecution, however, the FEC allowed Pelosi's two committees to negotiate "conciliation agreements" under which they were fined a total of $21,000.

But I'm sure this will get the FRont page banner headline Delay got in the LALA Times, right? < sarcasm on BIGTIME >

Do you think this might indicate a "climate of corruption" in the Democratic Party?

Pelosi DIDN'T break the law - it only applies to Republicans.

---anxiously awaiting the resignation notice---(Snicker, giggle, giggle--)
-----
Interesting. Well another slobbering, mindless communist in our Congress gets taken to task. It is about time for something to be shoved into Nazi Pelosi's big loud liberal mouth...like a "legal sock" and screams from conservatives for her IMMEDIATE RESIGNATION just like the commie cheerleading section of Congress wants every Repub in power to resign.

She needs to be the subject of a BIG INVESTIGATION and spread all over the media...(chuckle)...we know what the MSM will do with a story about one of their finest figureheads....

There is only one answer to this incredible waste of taxpayer dollars: Eliminate ALL "campaign finance" laws NOW.

There should only be one law: Anyone can donate any amount of money to any candidate at any time. Every candidate, on pain of 10 years in prison AND 10x restitution of ALL money donated to that campaign for that candidate, must fully disclose the source of EVERY penny received.

All these bogus campaign finance laws do is waste our time and give rise to BS fraud charges like the one leveled against DeLay.

Right! And everything else you proposed as well, including that the fine and sentence be mandatory.

Yep. The Libs tried to pull the same crap on DeLay with the travel expense issue before this. Then word got out that many other Congressmen/women did the same thing...including Pelosi. I haven't heard much about that lately.

This PAC crap is the same thing. Lawyers come up with ways to move money around that are legal so everyone does it. As DeLay said, the Texas GOP PAC's in Texas were doing the same thing the Dem Pac's were doing and it was all legal. The only difference is that for whatever reason, in Texas, these campaign funding issues fall under the Austin DA...Earle...the partisian hack.

Since DeLay's indictment came out a few days ago, there are already two stories out about prominent Dems, Reid and Pelosi, involved in questionable PAC funding.

The Dims are truly dumber than I ever thought possible. Luckily for Dims, they have the media to cover for them. It just isn't so easy for them to hide the truth anymore.

When may we expect your resignation, Nancy? Nancy??? NANCY!

Fitting image of Pelosi; But, better without the camouflage though -- green, big mouth, sucker hands and fingers.

Please . . . Will somebody please post one of those Nancy Pelosi Bug Eye photos . . .

Let you ypou esplian your way outta *this*m you
brain of a chicked,pervert...Just &who* will you
make your cackling "He should be fired or resign!"
press conference/photo Op du jour, against about
*this*?

Really, Pelosi..just what do you *do* to fill
your days, other than come out and act like
an outraged hen in front of the cameras, accusing
*other* people of not knowing what they are doing,
when *you* don't know anything about the topic
of the day, than what your equally cluelss "handlers"
tell you about it..so that you can go in front of
the cameras and squawk like a chicken????

Being denounced by an utter fool like *you*, is
a badge of honor, and a sure sign that the
Socialist pervert pusher Dims, *fear* you.