Many people are not aware that there is a need for salvation, or "being saved." It is assumed that as long as you try to be a good person, that is all God requires for heaven. It is such a common belief that every religion in the world is based on that principle... of salvation by works. The only religion that teaches differently is Christianity. Christianity teaches something differently because the Bible teaches something differently. The Bible teaches that we need salvation because we cannot save ourselves. Since God expects perfection from us (Leviticus 19:2), anything less, which is sin, must be punished. And the punishment for any and all sin is being separated from God forever after we die (hell).

That's what we deserve, but it is not what we receive. God has figured out a way to spend forever with us (heaven) and be sure that sin is punished at the same time.

The Bible clearly teaches that heaven is a gift that comes through faith in the death and resurrection of Jesus. God sent Jesus, who is the Second Person of the Trinity, to be a fellow human being. He was able to live a perfect life in our place, and die an innocent death as the payment for the sins of the whole world. It's a pretty neat arrangement. God loves us so much that He's willing to take the punishment of our sin on Himself so that we could be with Him forever.

The letters "INRI" are initials for the Latin title that Pontius Pilate had written over the head of Jesus Christ on the cross (John 19:19). Latin was the official language of the Roman Empire.

The words were "Iesus Nazarenvs Rex Ivdaeorvm." Latin uses "I" instead of the English "J", and "V" instead of "U" (i.e., Jesus Nazarenus Rex Judaeorum). The English translation is "Jesus of Nazareth, the King of the Jews."

The Early Church adopted the first letters of each word of this inscription "INRI" as a symbol. Throughout the centuries INRI has appeared in many paintings of the crucifixion.

By the way, Pilate's title for Christ was actually written in three languages.

And Pilate wrote a title, and put it on the cross. And the writing was, JESUS OF NAZARETH THE KING OF THE JEWS. This title then read many of the Jews: for the place where Jesus was crucified was nigh to the city: and it was written in Hebrew, and Greek, and Latin. Then said the chief priests of the Jews to Pilate, "Write not, 'The King of the Jews;' but that he said, 'I am King of the Jews'." Pilate answered, "What I have written I have written." -John 19:19-22 (KJV)

... AND finally, an excerpt from an old sermon called "What Pilate Said to Gaius."

"... “It suddenly closed in on me Gaius, the impact of how trapped I was. The proud arm of Rome with all its boast of justice was to be but a dirty dagger in the pudgy hands of the priest. I was waiting in the room, Gaius, the one I use for court, officially enthroned with cloak and guard when they let this Jesus in. Well Gaius, don't smile at this, as you value your jaw, but I have had no peace since the day he walked into my judgment hall. It’s been years but these scenes I read from the back of my eyelids every night.

You have seen Caesar haven't you? When he was young and strapping inspecting the legion. His arrogant manner was child like compared to that of the Nazarene. He didn't have to strut, you see. He walked toward my throne; arms bound but with a strident mastery and control that by its very audacity silenced the room for an instant and left me trembling with an insane desire to stand up and salute.

The clerk began reading the absurd list of charges. The priestly delegation punctuating these with palm rubbings and beard strokings and the eye rollings and the pious gutturals I had long-since learned to ignore. But I more felt it, Gaius, than heard it. I questioned him mechanically. He answered very little but what he said and the way he said it, it was as if his level gaze had pulled my naked soul right up into his eyes and was probing it there. It seemed like the man wasn’t even listening to the charges brought against him as a voice deep within me seemed to say `You are the one on trial, Pilate.' You would have sworn, Gaius, that he had just come in out of a friendly interest to see what was going to happen to me. The very pressure of his standing there had grown unbearable when a slave rushed in all a tremble, interrupting court to bring a message from Claudia. She had stabbed at the stylus in that childish way that she does when she is distraught. ‘Don't judge this amazing man, Pilate,’ she wrote. ‘I was haunted in dreams of him this night.’

Gaius, I tried to free him. From that moment on I tried and I always will think he knew it. He was a Galilean so I delivered him out of my jurisdiction, but the native King Herod discovered he was born in Judea and sent him right back to me. I appealed to the crowd that had gathered in the streets, hoping that they were his sympathizers, but Caiaphas had stationed agitators to whip up the beast that cry for blood and you know how any citizen here just after breakfast loves to cry for the blood of another. I had him beaten, Gaius, a thorough barracks room beating. I'm still not sure why. To appease the crowd, I guess. But do we Romans really need reasons for beating? Isn't that the code for anything we don't understand? Well, it didn't work, Gaius. The crowd roared like some slavering beast when I brought him back.

If only you could have watched him. They had thrown some rags of purple over his pulped and bleeding shoulders. They jammed a chaplet of thorns down on his forehead and it fit, it all fit! He stood there watching them from my balcony; lame from weakness by now but royal I tell you. Not just pain but pity shining from his eyes and I kept thinking somehow this is monstrous; this is all up-side-down. That purple is real, that crown is real, and somehow these animal noises the crowd is shrieking should be shouts of praise.

Then Caiaphas played his master stroke on me. He announced there in public that this Jesus claimed a crown and that this was treason to Caesar. And then the guards began to glance at each other and that mob of spineless filth began to shout, hail Caesar, hail Caesar. I knew I was beaten and that's when I gave the order. I couldn't look at him, Gaius. And then I did a childish thing. I called for water and there on the balcony I washed my hands of that whole wretched affair, but as they led him away I did look up and he turned and looked at me. No smile, no pity, he just glanced at my hands and I have felt the weight of his eyes upon them ever since.

But you’re yawning, Gaius, I've kept you up. And the fact of the matter is you are in need of some sleep and some holidays. Yes, sleep. Claudia will be asleep by now. Rows of lighted lamps line her couch. She can't sleep in the dark anymore. No, not since that afternoon you see, since the afternoon when the sun went out and my guards executed him. That's what I said, I don't know how or what or why—I only know that I was there and though it was the middle of the day it turned as black as the tunnels of hell in that miserable city and while I tried to compose Claudia and explain how I had been trapped she railed at me with her dream. She has had that dream ever since when she sleeps in the dark—or some form of it—that there was to be a new Caesar and that I had killed him.

Oh, Gaius we have been to Egypt to their seers and magicians. We have listened by the hour to the oracles in the musty temples of Greece chattering their inanities. We have called it an oriental curse that we are under and we have tried to break it a thousand ways, but there is no breaking it.

Do you know why I kept going, Gaius? Deep within the curse is the haunting, driving certainty that he is still somewhere near, that I still have some unfinished business with him, and that now and then as I walk by the lake he is following me and as much as that strikes terror I wonder if that isn't the only hope. You see, Gaius, if I could walk up to him this time and salute him and tell him that now I know that whoever else he was he was the only man worthy of his name in Judea that day. Tell him that I know I was entrapped—that I trapped myself. Tell him that here is one Roman that wishes he were Caesar. I believe that would do it wouldn't it Gaius? I believe he would listen and know I meant it and at last I would see him smile.

Quiet tonight isn't it Gaius? Not a breeze stirring by the lake. Yes, goodnight. You had better run along. Would you please waken the slave outside the door and tell him to bring me a cloak, my heavy one please. I believe I will walk by the lake. Yes, its dark there, Gaius but I won't be alone. I guess I really haven't been alone—not since that day. Yes goodnight, Gaius." 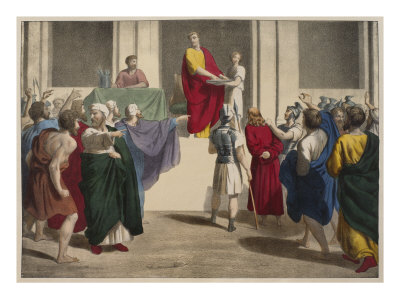 I told myself it was beneath my dignity to arrest a man for pilfering firewood. But nothing ordered by the party is beneath the dignity of any man, and the party was right: One man desperate for a bit of fuel is pathetic. Five million people desperate for fuel will destroy a city. That was the first time I ever saw my brother. But I knew him. And I knew that I would disobey the party. Perhaps it was the tie of blood between us, but I doubt it. We were only half tied anyway, and brothers will betray a brother. Indeed, as a policeman, I would say, get hold of a man's brother and you're halfway home. Nor was it admiration for a better man than me. I did admire him, but I didn't think he was a better man. Besides, I've executed better men than me with a small pistol. I told them who I was: The old man was hostile, the girl cautious, my brother... seemed very pleased. I think the girl was only one who guessed at their position.

"I am a free man, Lickspittle, and there's nothing you can do about it. I am the only free man on this train. The rest of you are cattle!" Tsutomu Yamaguchi was in Hiroshima on business for his employer Mitsubishi Heavy Industries when the city was bombed at 8:15 am, on August 6, 1945. The following day, he returned to Nagasaki and, despite his wounds, also returned to work on August 9, the day of the second atomic bombing. In 1957, he was recognized as a hibakusha (explosion-affected person) of the Nagasaki bombing, but it was not until March 24, 2009 that the government of Japan officially recognized his presence in Hiroshima three days earlier. He died of stomach cancer on January 4, 2010.

Liberalism is the transformation of mankind into cattle.