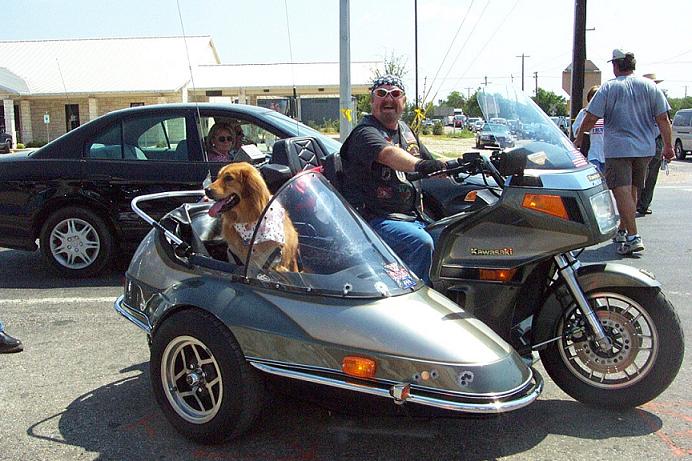 You wouldn't know it from TV, but this is what you see approaching the two camps. 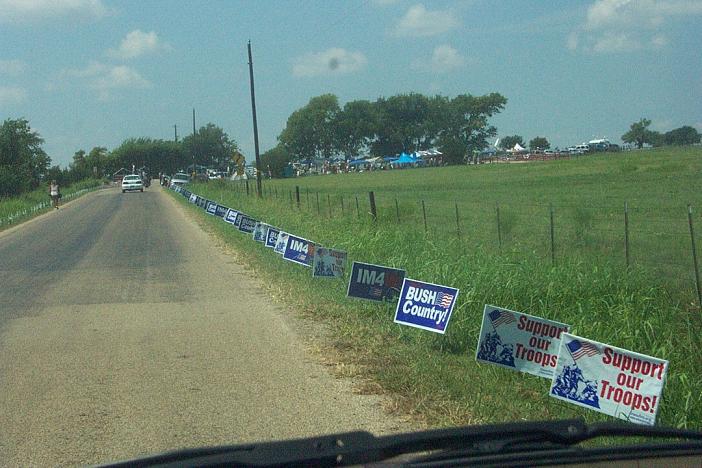 3,321 posted on 08/29/2005 7:32:21 PM PDT by JimNtexas
[ Post Reply | Private Reply | To 1 | View Replies]
To: lmavk
Doesn't this woman need to go home and pay the bills and do the laundry and all the stuff the rest of use have to deal with in our day to day lives? Who can wander around aimlessly for weeks on end with no job, hanging out in a field with hippies and no identifiable source of income. The whole thing just annoys me.

Have no doubt that she is paying the bills. Or rather MoveOn and/or CodePink are paying them for her, and more most likely.

Not to mention that our own Jim Robinson, FReeper #1, lives there. FR's servers are also there. (Hopefully well inland from the fault zones?)

I find my Texas State Rifle Association "Raging Bull" window sticker cuts down on that sort of thing. :)

And the sticker of the shied of the Army organization I support as a contractor doesn't hurt either, at least for anyone who knows what it is. (Can't post that one though)

Yes I DO! he is a very together young man. gives me hope that this nation will continue on, with men (and his friend who came from Tenn) leading the country. With the idiots on the other side, I KNOW who will turn out to be leaders.

I was out of town and couldn't go, I'm trying to read this thread of 3,324 and can only look at the pictures but your comment jumped out at me. Good job FREEPERS!

Yes, an apology was issued from the podium. Of course, like the announcement that the PWs were there and what their signs were like, it could not be heard by all the crowd. I could barely hear it at the front of the tent area.

Where the ones that would have been removed by the mothers still there, or could you tell from the pictures.

As you can see, at the first sign of a "disturbance" the vultures were on it like ducks on a June bug. Most of the folks in that picture are Media "Vultures", only a few are not.

The vets, that let their emotions over-rule their brains and confronted the Protest Warrior guys, where not FReepers. FReepers are well familiar with Protest Warrior signs - who doesn't remember "Belly Girl?" ;)

Why don't you take your slimy self back over to "War Cheerleaders" and stop violating FReepers' copyrights on your silly blog.

Question..tonight, as I was coming home around 9 P.M.or so, I think, I was listening to a liberal talk show host-randi rhodes (sp)- and she was discussing the Crawford rally with a caller.

She and the caller were agreeing that the pro-war folks (as they called us) were very rude and in trouble a lot. That they spun gravel with their big trucks onto the the cindistan folks and other things...that they were very rude, and that it was obvious the people in Crawford did NOT support the President because in only three pro-Bush signs were spotted in all of the neighborhoods they drove around...and that there were lots of signs saying 'We do not support you'....

I was thinking those signs meant the code pinkos and cindistani's, lol, when I heard this discussion on the radio.

Could it have something to do with the wave of states passing "Shall issue" CHL laws? Couldn't have hurt.

The water is probably better. Some Gatorade or better yet one of the newer "sports" drinks with less sugar, along with lots of water would probably be better yet.

I know, I was inside for a few minutes after the rally ended when I took back a bunch of chairs. (8 to be exact) Should have taken more, but I was just to tuckered out. My buddy, who took 8 also, but all at once, said he started to get dizzy carrying his load over. (I did mine in two trips).

Yeh, the vultures really swarmed what they thought was something they could (and did!) use against us.

As I suspected. Way too many people poured in when the "Convoy" arrived. And continued to pour in for some time after wards.

If it was digital, most of it went into the old bit bucket. If it was analog, File 13, aka "the Round File". IOW, it got spiked at the editor's desks.

Technically, under the strict rules of flag etiquette, it was improper. But how can making something to send the message to the troops (which is where that flag that was written on was headed) somehow be "desecrating" the flag? I'd say it was being honored.