WASHINGTON— Anticipating President Bush soon will appoint John Bolton as U.N. ambassador, a leading Democrat said Sunday that Bolton would go without the confidence of Congress.

"He's damaged goods. This is a person who lacks credibility," said Sen. Christopher Dodd, a senior Democrat on the Senate Foreign Relations Committee. He said Bush should think again before using a recess appointment to place Bolton at the United Nations while the Senate is on its traditional August break.

"That's not what you want to send up, a person who doesn't have the confidence of the Congress and so many people who've urged that he not be sent up to do that job," said Dodd, D-Conn., on "Fox News Sunday."

As Bush left church on Sunday, a reporter shouted a question, asking whether the president would be appointing Bolton. Bush smiled and refrained from answering.

Two administration officials said on Friday that the president would appoint Bolton before leaving on Tuesday to spend August at his Texas ranch. The officials spoke on condition of anonymity because Bush had yet to made the announcement.

Under the Constitution, the president may issue an appointment and bypass Senate confirmation when it is in recess. Such an appointment ends when the next session of Congress begins — January 2007, in this case.

Senate Democrats have led the effort to hold up a confirmation vote for Bolton, citing what they have described as undiplomatic behavior by the former State Department official.

"If the president recess appoints John Bolton, I can understand why because he's been waiting a long time to get the person that he believes is the best to represent his administration at the U.N," said Sen. Mitch McConnell, R-Ky.

McConnell said he doubted that a recess appointment would have a strongly negative impact on the atmosphere in the Senate. If Bush withdrew the nomination, no ambassador would be in place when the U.N. begins taking up important issues in the fall, he said.

"Bolton's been sort of twisting in the wind since March," McConnell said. "Bolton's exactly what the U.N. needs at this point. The president's right on the mark in picking him."

Bush will be sending Bolton to the U.N. "with a cloud over his head," said Sen. Joe Lieberman. Had the administration given the Senate committee all the documents it had requested, the full Senate probably would have voted on the nomination and Bolton would have been confirmed, Lieberman said.

"He will be our U.N. ambassador," Lieberman said on CNN's "Late Edition." "He'll have the obvious authority of the president of the United States and I think we've got to hope he does the best job he can at a tough time, an important time, up there."

Sen. Jon Kyl, R-Ariz., added, "It would have been better had he been confirmed, but under the circumstances, everybody at the U.N. will know that he's the president's man."

The administration has promoted Bolton for a hard-nosed style that officials believe will help push reform in the United Nations.

Opponents say his criticism of the world organization and reports that he has abused underlings and sought to punish those who disagreed with him render him unfit for the position.

The Senate should pass a resolution supporting John Bolton as UN Ambassador.

While it would be non-binding, IIRC it would not be subject to filibuster.

Dodd needs to learn that the US representive at the UN works for the EXECUTIVE BRANCH. Not the Congress.

He's about to find out about recess appointments.

I don't think that Bush should recess appoint Bolton. Dubya should just keep sending Bolton's name up for confirmation, month after month, until he gets an up or down vote in the Senate. Meanwhile, let the real Republicans in the House refuse to fund so much as a single dollar to the scumbag UN until they are "confident" that a true reformer has been appointed to the UN to keep an eye on all those US taxpayer dollars that get dumped into that toilet every year.

I hope Bush has the guts to play some chicken with this thing.

6 posted on 08/01/2005 1:13:03 AM PDT by Lancey Howard
[ Post Reply | Private Reply | To 1 | View Replies]
To: Cincinatus' Wife
Dodd is a simpering fool, only idiots and the media would believe anything he says. The very people who will deny the man a vote on the senate floor are saying he won't have the confidence of Congress.

If the media were non-partisan he would be laughed into resigning for this statement.

The Republicans will never withhold funds from the UN, we pay about 25% of their administrative costs and 30% of their peacekeeping costs. And they gripe about the 'dues' which is a fraction of what we give them.

Bull. Dodd's head is soft as a ripe cantaloupe. The guy is a fast talking flim-flam man. Ask the jerk WHO went about damaging Bolton!!

WASHINGTON (Reuters) - The Bush administration strongly opposes moves by the U.S. Congress to slash dues to the United Nations and is optimistic the scandal-hit body will implement tough reforms, a top U.S. official said on Thursday, Source

They he turns around and sends Bolton into the U.N. swamp with clear objection from the LIBERAL U.N. loving Senators.

Thanks for posting. Dodd could not be more wrong. Lots of conservatives like me out here in flyover country are looking forward to Bolton's appointment, and if the Senate won't do it, oh WELL!

I'm laughing at Dodd--I don't know anyone who cares what he thinks.

Yeah, they punch your face in, then criticize you for your appearance.

It must have hurt walking to Bush's inaugural. 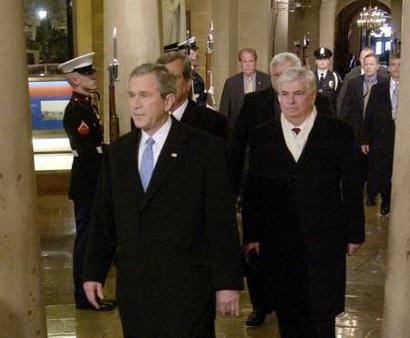 It seems that a vote of approval by the Congress would label one as damaged goods.

Well, that isn't going to happen.

As you observe who are his enemies, Bolton stands tall.

The msm wants to give the appearance that they matter.

19 posted on 08/01/2005 1:33:49 AM PDT by Cincinatus' Wife
[ Post Reply | Private Reply | To 12 | View Replies]
To: Cincinatus' Wife; konaice
Speaking of "recess", my mother was an excellent student as a child, yet she still told me, my brother and sister that her favorite period in school was recess. She would love this "recess".