Remember awhile back, nearly four years now — it may have been in September — something really bad happened?

We don’t like to talk about it now, but you may recall that it was in New York, and in Washington, and in a field in Pennsylvania.

A lot of people died. It changed the lives of millions of Americans, some in profound ways. And many people vowed to make sure it didn’t happen again.

But we don’t like to talk about it now. In fact, if the president even brings the Bad Thing up, some people become very agitated.

So it was no surprise that when George W. Bush gave a speech Tuesday night on the war in Iraq, and he mentioned the Bad Thing — he called it “Sept. 11” — there were lots of hurt feelings.

Like those of House Minority Leader Nancy Pelosi (D-Calif.). “The president’s frequent references to the terrorist attacks of Sept. 11 show the weakness of his arguments,” Pelosi said after the speech. “He is willing to exploit the sacred ground of 9-11, knowing that there is no connection between 9-11 and the war in Iraq.”

Senate Minority Leader Harry Reid (D-Nev.) was also unhappy. “The president’s numerous references to Sept. 11 did not provide a way forward in Iraq,” he said.

And, of course, The New York Times was upset. “We had hoped [Bush] would resist the temptation to raise the bloody flag of 9/11 over and over again,” the paper editorialized, “to justify a war in a country that had nothing whatsoever to do with the terrorist attacks.”

But what’s so wrong with talking about Sept. 11? It was only a world-historic, before-and-after event that has fundamentally changed the way the United States deals with the rest of the planet.

If Bush administration officials have made a mistake on the national security front in the months since the election, it is that they have not talked about Sept. 11 enough.

As many critics pointed out, Bush mentioned September 11 five times in his speech Tuesday.

First, the president said that American troops “are fighting a global war on terror. The war reached our shores on September 11, 2001.”

Second, the president said, “After Sept. 11, I made a commitment to the American people: This nation will not be attacked again. We will defend our freedom. We will take the fight to the enemy. Iraq is the latest battlefield in this war.”

Third, the president said, “The only way our enemies can succeed is if we forget the lessons of September the 11th, if we abandon the Iraqi people to men like Zarqawi and if we yield the future of the Middle East to men like bin Laden.”

And finally, the president said, “After Sept. 11, 2001, I told the American people that the road ahead would be difficult and that we would prevail. Well, it has been difficult and we are prevailing.”

Still, the president’s critics became angry, accusing Bush of claiming that Iraq had a role in Sept. 11.

But wasn’t the plain meaning of Bush’s words that the same people who perpetrated Sept. 11 are today fighting the U.S. in Iraq?

That seems indisputable. Osama bin Laden has given his blessing to Abu Musab al-Zarqawi; Zarqawi has proclaimed his allegiance to bin Laden. And al Qaeda appears to view Iraq as its main battleground today.

So this is the situation: No, Iraq did not plan Sept. 11 — even though many officials, chief among them Richard Clarke, worried about a Saddam-bin Laden connection — but the United States is now fighting al Qaeda in Iraq.

Accept, if you choose, the Democratic premise that Iraq, when the president decided to invade, had nothing to do with the war on terrorism. Even if that was true then, it’s not true now. If we’re fighting al Qaeda — along with a host of foreign jihadists — it’s part of the war on terror.

But if some Democrats had their way, the United States would have to fight that war on terrorism without ever mentioning Sept. 11. Does that make sense to you?

Even though a much-publicized series of polls has shown that many Americans believe it was a mistake to go into Iraq, the surveys also suggest that the public knows the United States has to stay there now.

And they apparently weren’t offended by Bush’s five references to Sept. 11. After the speech, Gallup pollsters found that 74 percent of those surveyed had a very positive or somewhat positive reaction to it.

They remember the Bad Thing very well — even if some people don’t want to talk about it.

York is a White House correspondent for National Review. His column appears in The Hill each week.
E-mail: byork@thehill.com

I'd like to see him give another speech in a week or so in front of a screen showing video of the planes hitting the towers.

I visited my local K-Mart today, and saw two men wearing 9/11 T-shirts. May be coincidence. But I think the American public--after all the negative media barrage -- knows what is right.

Can somebody please run for Pelosi's seat whenever she up for election next. And when she loses, she can run away from everything and go in hiding for 4 days and then come back and get interviewed by Katie Couric and say that she just needed to get away from everything.

4 posted on 06/29/2005 6:51:23 PM PDT by Gribbles141
[ Post Reply | Private Reply | To 3 | View Replies]
To: JeanS
Amazing how short the memory of the "Murrican Pipple". Why is it that the attack on Pearl Harbor galvanized the American people? It was not referred to as a "tragedy", there was no breast-beating and wondering what we evil Americans had done to offend the Japanese. There was no doubt that Hitler had to be defeated.

What has happened to us?? On September 11, 2001, more than 3,000 innocent men, women, and children were murdered on our soil: the World Trade Center, the Pentagon, and Shanksville, Pennsylvania.

How is it that when President Bush reminds us of this horrific attack, he is criticized by the liberals in Congress and in the media.

It would have been unimaginable for FDR to have been criticized for referring to Pearl Harbor during WWII. Would this same vitriolic rhetoric from the left have been tolerated then?

IMO, the flags need to go back on the cars. The American shirts pulled out to wear again if any stopped. I love Rush's GITMO shirts because it's an effective way to fight back against the visual propaganda. i want to see footage of 9-11 again. Not on tapes I privately own, but on networks. On outlets. This is war, we cannot pretend it didn't happen, or it'll be worse next time.

I've also been considering this poll.

And they apparently weren’t offended by Bush’s five references to Sept. 11. After the speech, Gallup pollsters found that 74 percent of those surveyed had a very positive or somewhat positive reaction to it.

They remember the Bad Thing very well — even if some people don’t want to talk about it.

And I've come to the conclusion the decision to grant 'fairness' in citing more people identified as Republicans to be full of it. They took a snap poll before the speech, and afterwards. The President's target audience was not those that have always opposed him. Only the Republicans/conservatives, Indy's, Iraqi's and terrorists. The absence of Democrat identification means next to nil. It was his base that has always supported him that needed a little morale boost and the poll reflects that's exactly what happened when support increased among that targeted base.

To the great detriment of this nation, and to the men & women who serve to protect her, @$$-holes like pelosi and reid are so bond up with their partisan constipation of hatred they are absolutely unwilling to acknowledge and/or accept that the war in Iraq is a major battle in the war between Freedom and Fear.
9 posted on 06/29/2005 6:58:45 PM PDT by Zacs Mom (Proud wife of a Marine! ... and purveyor of "rampant, unedited dialogue")
[ Post Reply | Private Reply | To 1 | View Replies]
To: Inspectorette

30 years of the MSM and liberal professors teaching kids that the US is the source of all evil in the world.

It's human nature. You keep being told you're wrong and eventually you shut up. True leaders know how to rise above this.

Dick Morris was on Hannity and Colmes --I was only watching because the Yankees-Orioles game was rained out-- and he said that President Bush's speech will hurt him because he did not talk female enough which I guess means he was too manly and not reasurring enough to Moms. Did anyone else see this and am I correct in thinking that Dick Morris is absolutety nuts? How do all you Moms out there feel about this?

Please remember that throughout 2004 liberals and their media whores unleashed constant and savage attacks against our President, the war in terror in general and the war in Iraq in particular even more than what they are doing now, but at the end they were utterly defeated. The majority of Americans did not buy their defeatism and their lies, and the majority of American understood and still understand this crucial war on terror we are fighting in Iraq and elsewhere. In November 2nd 2004 the American people re-elected President Bush with the largest number of votes ever cast for a President of the United States of America.

13 posted on 06/29/2005 8:20:03 PM PDT by jveritas (The Left cannot win a national election ever again.)
[ Post Reply | Private Reply | To 3 | View Replies]
To: sydbas
If Dick Morris said the speech will hurt President Bush then bet your house that it will greatly help him.

Dick Morris is the most overrated political "idiot" analyst in America, and he is wrong like 99.9% of the time in his analysis and predictions.

Trust me, soccer moms are more worried about Oprah getting dissed by a store in France right now.

Byron sounds like he's speaking to a classroom of petulant second-graders.

The Democrats are clearly at the preschool level. This may go over their heads.

16 posted on 06/29/2005 9:22:49 PM PDT by Choose Ye This Day (We're a sovereign nation in a time of war; why don't we have the right to defend our borders?)
[ Post Reply | Private Reply | To 1 | View Replies]
To: Gribbles141
Can somebody please run for Pelosi's seat whenever she up for election next. And when she loses, she can run away from everything and go in hiding for 4 days and then come back and get interviewed by Katie Couric and say that she just needed to get away from everything.

That, indeed, is the basic strategy: 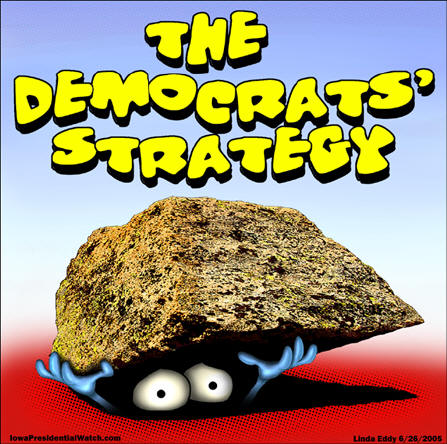