The Mystery of the Vanishing Nickel (In other words, a nickel for your thoughts.)
The American Prowler ^ | 1/7/2005 | Lawrence Henry

During the week, I accumulate about $3 worth of change in my trouser pocket. It mainly serves my kids and their needs for milk money and so forth. Toward the end of the week, I start to spend down the change, counting out large and precise amounts of it at stores. I've begun to notice something. In the entire pile, I seldom find a nickel.

I began to ask around. Conclusion? Many retail change-makers are such numskulls they do not observe anything. (I did find out that modern cash registers do not actually count coins for the clerk, though the register does calculate the amount of change owed. I had thought that might be a reason for the nickel's scarcity -- that the machines eliminated it.) One day after Christmas, however, I found my local post empty except for the clerks, and I asked the two of them, one man, one woman, whether they had noticed how seldom nickels were used.

"Oh, yeah," the man said immediately. "We go to the bank, we never get nickels. Nickels last forever."

What accounts for the scarce appearance of nickels? Numeric necessity? There are 99 coin-change transactions, from one cent to 99. Assuming that all such transactions get executed with the minimum number of required coins, a nickel is necessary in eight, plus four times eight. The eight are 5, 15, 30, 40, 55, 65, 80, and 90 cents. "Four times eight" represents the additional number of transactions represented by the four pennies for odd amounts up to the next five-cent interval: 6, 7, 8, and 9, and 31, 32, 33, and 34, for example. Total, 40. And each of those 40 transactions requires only a single nickel.

On a strict mathematical basis, change-making requires three and a half times as many quarters as nickels, and not even twice as many dimes as nickels.

But something else must be going on here. My typical pocket sample has 10 times as many dimes as nickels, and eight to 10 times as many quarters. And, as the postal clerk told me, "Nickels last forever."

I suspect that clerks often substitute dimes for quarters, probably because they notice their change drawers running short of quarters (it's the biggest coin and the easiest to see). So you'd get a quarter and three dimes for 55 cents instead of two quarters and a nickel.

Or perhaps retail clerks can't add. My local small grocery limits cash back from a debit card to $25. The cash registers don't add that amount, so the clerks have to add it on paper or in their heads, and many simply can't.

Or maybe many retail clerks, seriously challenged in English, hail from countries where there are no coins denominated in fives. You can learn to say "small black" or "chocolate frosted" quickly, but counting comes hard in a different language. 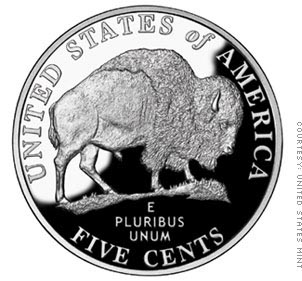 In 1964, I believe it was, my wife and I saved all the half-dollars we received in change, putting them toward a vacation. At the end of the year, we had over $300 in the gallon jug that we tossed them in.

It worked so well that we repeated the regime the very next year. And ended up with $27.50...

I collect 1/2 dollars, although i don't have that many. I only collect them if they come across my path during transactions. I have some 1 dollar pieces too, those are my favorites. :)

This is interesting. I was wondering about this. Last year I didn't get one of the Lewis and Clark 2004 nickels until, I think, December 30. I couldn't figure out why. Maybe they just don't circulate much (and when people do get them, they probably hoard them at first, just like they did when the state quarters were new and there wasn't such an excess supply of them yet.)

I was wondering if the whole Lewis and Clark nickel thing was just a myth.

The Chinese noodle shop I always eat in has lots of unusual things in the register (I always glance over when I pay...) Dollar coins, half dollars... Last week it was 2 dollar bills.

I'll bet the ubiquitous "penny cup" at most cash registers is the culprit.

With the "penny cup", very few transactions end up requiring multiple pennies and an associated nickel in change. If the clerk rings up $.91 and you throw down a dollar, and you don't have a penny, the "penny cup" will produce a dime in change rather than four pennies and a nickel.

8 posted on 01/06/2005 10:53:36 PM PST by okie01 (The Mainstream Media: IGNORANCE ON PARADE)
[ Post Reply | Private Reply | To 1 | View Replies]
To: nickcarraway
They can't add, multiply, divide or subtract. Some of them can barely read, much less spell or write a simple, coherent declarative sentence.

Nickels do last forever. It has been easy to find circulating nickels from the fifties and sixties, and since they changed the design this year, the nickel has been a favorite for coin collectors. I suspect many get taken out of pocket change every night. There are pickle jars all over the country rapidly filling with Jeffersons.

Are nickels relatively expensive to produce? If so, maybe they make coins that are cheaper relative to the metal content. That is just a guess. I know that pennies are mostly made of zinc nowadays. Dimes used to be silver a long time ago. Now they are a mixture of cheaper metals.

I believe you're right. Penny cups have become so ubiquitous that I find myself very annoyed when dealing with an establishment that fails to follow the practice.

These new designer nickels, however, are annoying in themselves. Without looking at them closely I keep misidentifying them as the state quarters.

One more thing - most other countries follow a scheme where their coins increase in size along with their denominations. I've always wondered why our pennies and nickels are larger than dimes.

"I've always wondered why our pennies and nickels are larger than dimes."

Me too. But I've come to think of it as kind of cool. It's like the dime has secret super power!

It there a nationwide quarter shortage?
I hate dimes.

But now with the doubling of the tolls and the coercion of an RFID transponder...no need for the nickel. No need for cash. All my driving on the tollway is recorded.
16 posted on 01/07/2005 12:26:37 AM PST by endthematrix (Declare 2005 as the year the battle for freedom from tax slavery!)
[ Post Reply | Private Reply | To 13 | View Replies]
To: endthematrix

If you're saying that your local government is forcing citizens to carry technology that tracks their movements for the sake of highway funding I feel you have a serious case of civil liberty infringement. Too bad the ACLU no longer has any interest in those cases. Their bread is now buttered by perpetuating Socialism while dismantling individual freedoms.

Sorry, folks; I realize this is a thread about coinage. Some issues rise above the trivial.

Well, I drove the Illinois tollways around Chicago on Monday, and at every toll booth I threw in three quarters and a nickel. That's the easiest combination for 80 cents.