(WASHINGTON, D.C., CAIR) – CAIR today called on American Muslims and other people of conscience to contact the MSNBC cable television network to demand an apology for comments made on its “Imus in the Morning” program that referred to Palestinians as “filthy animals” and suggested that they all be killed.

The Council on American-Islamic Relations also asked that the program’s host, Don Imus, be reprimanded for failing to challenge his colleagues’ inflammatory remarks. CAIR, which says it received numerous complaints about the comments, quoted a transcript of Imus’ November 12th program in which he and his on-air colleagues engaged in the following discussion about live coverage of Palestinian President Yasser Arafat’s funeral:

DON IMUS: They’re (the Palestinians) eating dirt and that fat pig wife of his is living in Paris.

Both his neurons were firing at the same time.

Imus didn't say it, his colleague did, I guess.

AMERICANS ON A BRIDGE IN FALLUJA BY ISLAMIC SUBHUMANS

TORTURE OF AMERICANS BY ISLAMIC SUBHUMANS

Chemical warhead found at an Iraqi air base, marked with a green band,
the symbol for chemical weaponry. Trace amounts of a nerve agent were found
at two spots along the ~meter-long warhead. These amounts are consistent with
leakage from the chemically armed weapon. A 13-foot missile was found next to it. 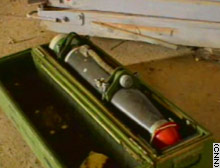 ...and now a FOX NEWS ALERT: Cat stuck in tree in downtown Springfield!

Imus could care less - more publicity for his show!!

I'm sorry I called the Palestinians 'filthy animals. That was insensitive to dirty animals everywhere. My most sincere apologies.


Dear IMUS in the Morning,


It's simple: Moslems and Palestinians are the Gutter-Dogs of Humanity.


Moslems and Palestinians breed like sub-human vermin, then sacrifice their own children to become "Human Bombs", killing others' Children in the process.


Moslems and Palestinians are typical of the Arab mental squalor that's condemned entire sub-continents to vast cesspools of poverty, disease, and brutal ignorance.


Moslem and Palestinian Women are worthy of the Enslavement in which they and their Babies suffer eternal damnation, at the hands of Pseudo-Men whose Barbarism is only exceeded by their Pathetic Depravity towards the Moslem Boys playing at the local Mosque.


Moslem and Palestinian Women could have rebelled against their Depraved Male Slave-Masters decades ago, as did their Asian and Western European sisters. But the Arab's racial cowardice (genetically inbred over the centuries) condemns Arab Men and Children to flee from genuine Honor just as disease flees from Penicillin.


Why does the entire Civilized World turn away in disgust at Moslems and Palestinians ?


Because even the monstrously evil Bolsheviks and Nazis had the courage to fight their enemies as Men, face-to-face, eyeball-to-eyeball.


Because even the deranged Japanese Kamikaze Pilots of World War II mustered the honor of a suicide-death in the face of Open Battle.


Accordingly, even fifty (50) years after World War II, American, Japanese, British, German and Russian soldiers will even toast together the mutual memory of their fallen comrades, because all were imbued with the Singular Honor of Men who Sacrificed Their Lives (on the field of battle) for their respective nations.


Moslems and Palestinians ? They cannot even comprehend such Honor.


It's as foreign to Moslems and Palestinians as America's Bill of Rights and the God-Ordained Right of Women to enjoy the blessings of life and family, without living as Dowry Slaves in the Shadow of Fear of being Burned at the Stake to satisfy the Satanic Monsters lurking in the Soul of every Islamic man.

Have I made my Point ?

Awww, did the widdle terrorists get their feelings hurt?

10 posted on 11/18/2004 3:16:10 PM PST by Toddsterpatriot (Protectionists give me the Willies!!!)
[ Post Reply | Private Reply | To 1 | View Replies]
To: kupia_kummi
But my guess is that Imus will fold like a house of cards in a hurricane ... just as he did after the reporters' dinner in Washington where he told the truth about Clinton and his fat pig wife.

When this CAIR does anything to conmdem Islamic outrageous acts I might pay them a centilla of attention.

I'm waiting on CAIR to denounce the beheadings and murders committed by the Islamic terrorists.

Sticks and stones and all that.

What about the killings. Where is their outrage?

Hey, for once I must agree with Imus.