Halo 2, the sequel to the top selling game for Microsoft's Xbox, will be released on November 9th.

Joe Staten, the Microsoft employee and writer responsible for the storyline of both games, will use the new game (targeted at teens) as a political protest against the Bush Administration.

For those who don't know story of the Halo games, it takes place in the future when vicious and radically religious alien forces called "The Covenant" are in a war with the human race and have trapped a lone human warship light years from Earth near the heretofore unknown Halo, a huge ring-like world manufactured and abandoned millennia ago by a powerful race. Unfortunately, Halo is still inhabited and activating its immense power will bring forth "The Flood," a bio-mechanical army that will wipe out all human and Covenant life in the universe. Your mission a genetically-modified human soldier in the game of Halowas to fight the Covenant, the Flood, and destroy Halo before it is activated and all life as we know it ceases to exist.

Halo scribe and Microsoft employee Joe Staten was interviewed in the November 5, 2004 issue of Entertainment Weekly (subscription required) about the new game. In the interview Staten says the Halo 2 story follows the Covenant "holy war" invasion of Earth brought on by the fact that Earth military forces destroyed Halo at the end of the first game. Unlike in the first game where Halo was a life-destroying superweapon, in Halo 2 we are now told that Halo was one of many and are "utopias, safe havens in a universe filled with terror." Halo 2, according to Staten, will show the story from "both the humans and aliens" and makes militant Earthlings into the imperialist bad guys against the religious Covenant aliens who consider Halo as a religous relic. "You could look at it," Staten says of his Halo 2 storyline "as a damning condemnation of the Bush Administration’s adventure in the Middle East." Microsoft has taken a straightforward action game classic in the original Halo and decided to make a political statement with Halo 2.

It begs the question: Why would a gamer or the parent of a gamer pay $50 to play a game that will force the player to shoot hundreds of "bad aliens" for hours to advance in the game and then at the end of it admonish the player for shooting the bad aliens? "These aliens weren’t really ‘bad’—they were just misunderstood and we awful human beings had no business ever leaving our little corner of the universe. You, and all humans like you, are violent and bad but the aliens are more highly-evolved, peaceful, caring beings that we should have respected and loved rather than murdered."

If Joe Staten and Microsoft want to make a political statement (and as anyone living near Microsoft HQ in Redmond, WA will tell you, the overwhelming majority of their employees in Redmond, WA are violently anti-Republican), they can do it without my money funding their next political statement. It will be a drop in the bucket, of course: Halo 2 has a rabid fanbase clamoring for the product and over $50 million is pre-order sales means the game is already massively profitable prior to its retail release.

To the gamers that will say "I’m going to play it because it’ll be fun and I can see past the politics to enjoy myself"—fine, that’s their right. However, I urge those concerned about the rot in American pop culture to spread the word about Halo 2 and Microsoft's hateful view of the Bush Administration.

Well, in this particular case, you are waaaaay off the mark. Halo 2 has nothing - nothing to do with anything related to politics. It's a game. Period.

However, I'm betting that you are one of those types who is against video games in general, and are now finding some new tact for trying to get rid of them, right?

(I mean, hey, you get to reach to idiotic conclusions, so why can't we?) 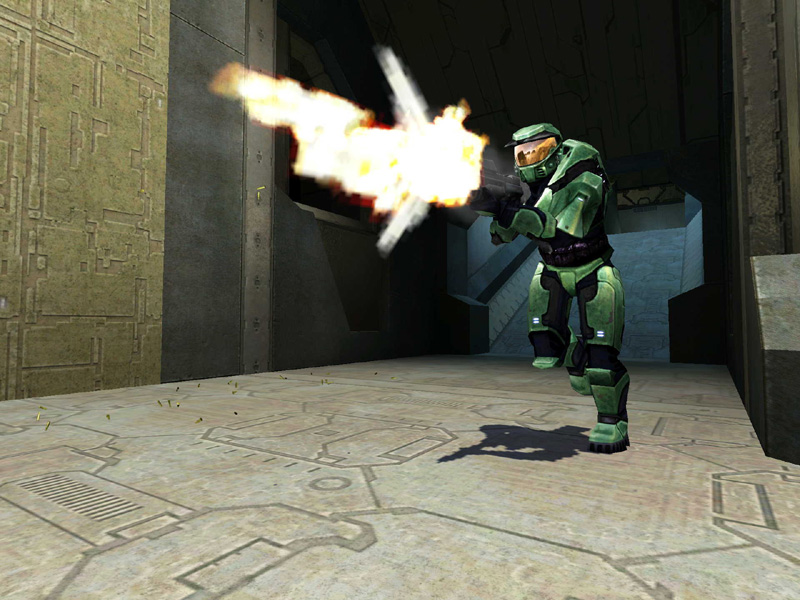 Hey! Are you thinking what I'm thinking?
A Freeper clan!
Now that could be some serious fun...

124 posted on 11/08/2004 4:30:11 PM PST by papertyger
[ Post Reply | Private Reply | To 122 | View Replies]
To: Republican Radio™
Halo, a huge ring-like world manufactured and abandoned millennia ago by a powerful race. Unfortunately, Halo is still inhabited and activating its immense power will bring forth...

Conceptually, this sounds like a ripoff of Larry Niven's "Ringworld" with added gratuitous violence (shoot up the BEM's). That's "bug eyed monsters" for all you non sci fi fans. The author of this game is a plagiarist as well as a raving lefty.

PS But then, all art is derivative.

I'm not live yet either. I still have to see if I can get the thing to work through my airport router. I'm willing to spend a bill or two, but that's it.

I believe I've read the xbox will support clans, but I'm not sure where I saw it.

Oh...we have GOT to make this happen! The only thing I can think that would be better than waxing stupid kids and geeks online is to do it with unapologetic Freepers!

You going out tonight to get it?

i believe Mr. Gates is a supporter of the President.

Then you sir need to buy a copy of Battlefield1942 and prepare yourself for an incredible multiplayer online experience.

Q. What's orange and looks good on hippies?
A. Fire.

I have played it before. It is cool. I used to be a big fan of the old Atomic Games stuff like Close Combat. Codename Panzers is the closest I have found to it. I can sit for hours playing the stupid thing. MOH Pacific Assault looks to be quite cool also. Need to check it out.

If you haven't played the Combat Mission series, they are some of the best games out there. They are a modern version of the old board war games. Combat Mission takes over where Advanced Squad Leader left off. Very good for the armchair general type.

Let me be really clear about this: there is no intentional political message in Halo2, anti-Bush or otherwise.

While I tried to be mindful of folks' sensitivities as I wrote its story, I knew that the game was going to scrutinized by a large, diverse audience, and would, therefore, be interpreted (or mis-interpreted, as the case may be) any number of different ways.

The EW journalist chose to include one of my examples of possible misinterpretation in the article, but not all of them. Most importantly, the journalist left out my closing statement: "Look, you can read anything into the story that you like - call a damning condemnation of the Bush Admnistration's adventure in the Middle-East, for example. But you'd be wrong."

In retrospect, It would have been best to give no example at all, but hindsight is 20-20.

Long story short: while we didn't water-down Halo2's story in an impossible effort to make it inoffensive to everyone, we were nonetheless careful not to do anything that would be patently offensive regardless of someone's perspective (e.g. reward people for injuring or killing the game's female characters, something most folks would agree is offensive, full-stop).

Halo2's story is non-partisan. Any meaning you ascribe to it is yours alone.

And remember, at the end of the day, whatever some journalist says I said really doesn't matter. The proof is in the pudding. Play the game, and I think you'll see it's just that: a fun game with a good story.

Dont play with me? a FRclan? Pwnage. We need to hook up when I pick up my copy tomorrow.

Thanks for clearing this up, Dude!