Fig.: Shape of the magnetic field lines in a magnetic star, computed by numerical simulations (stereo images upper left).They form a ring of field lines twisted around each other (blue). Field lines protruding through the surface of the star (red) are held together and stabilized by the twisted ring inside the star. This is illustrated by the schematic sketch (the lower right) and the cut through the star (upper right). This magnetic field configuration drifts slowly outward (over a period of hundreds of millions of years) under the influence of the finite electrical resistivity of the star, then distorts into the shape of the seam on a tennis ball (lower left), after which it disappears from the star.

This discovery is important for three classes of stars in which strong magnetic fields are observed. The most well-known are the so-called `magnetic A-stars', otherwise known as normal stars (about 2 to 10 times heavier than the Sun) which have a magnetic field like a bar magnet. An example is Alioth (Epsilon Ursae Majoris, the fifth star in the Big Dipper). Among the White Dwarf stars there are stars with magnetic fields 100,000 stronger than this, and finally there are `magnetars': neutron stars with fields 100 billion times stronger than that of a commercial bar magnet. The magnetic field of all these stars is smooth and static, in contrast with the field of the Sun and similar stars, which is weaker, consists of small patches, and changes continually.

Since the discovery of magnetic stars over 50 years ago, there have been two competing hypotheses for these magnetic fields. In one theory, the field is assumed to be generated by convective motions in the core of the star, in same way as the Earth's magnetic field. The other is the `fossil field hypothesis': the idea that it is just a remnant of the magnetic fields trapped in the gas clouds from which stars are born. Some evidence points to this possibility, for example the fact that the observed fields do not change over time. The main problem with the latter theory has been that no magnetic field configuration was known that can survive for the life of a star. All configurations studied so far turned out to be unstable, and would decay within a few years.

This demonstrated that two criteria would need to be fulfilled for the fossil theory to be viable. First, stable field configurations have to exist in stars, not self-evident in view of the slippery, fluid nature of the stellar material. Secondly, there has to be a path towards such a field configuration from the magnetic field with which the star is born. This configuration has now been found by the Max Planck researchers with numerical simulations in which the evolution of an arbitrary unstable initial field configuration was followed to a stable final state.

The stable state always turned out to have the same shape - a ring (torus) of twisted field lines, similar to the configurations used in modern controlled fusion experiments. It looks a bit like a car tire in which broken steel wires of the wire mesh stick out through the surface. At the surface of the star, these field lines make up an approximate dipole field, as seen in the observations.

With these results the Max Planck researchers have provided a solid basis for the theory of magnetic stars: as remnants of the magnetic fields threading the gas clouds from which stars are formed, and it explains why the fields can survive for hundreds of millions of years. At the same time, the results make it likely that the magnetic fields in White Dwarfs and neutron stars have the same structure and stability. Original work:

According to the late Dr. Robert Forward, if one rotates a massive object (or stream of objects) around a toroidal field (as shown in the illustration at the bottom left of your post), one will produce a gravitomagnetic field (i.e., artificial gravity) about the torus (shown in blue in the illustration).. A object encountering this field will be accelerated without inertial effects along the field lines (shown in red in the illustration) with a velocity proportional to the strength of the field.

In other words, if you built such a torus out in space, you could "drop" a ship into its vicinity and the artificial gravity field around the torus would "kick" the ship out into space at an arbitrailty high speed — and without subjecting the passengers to any g-forces whatsoever.

Re above post: for “bottom left” read “bottom right”. Sorry for the dysgraphia.

4 posted on 10/15/2004 9:19:38 AM PDT by B-Chan (Catholic. Monarchist. Texan. Any questions?)
[ Post Reply | Private Reply | To 3 | View Replies]
To: B-Chan
Trippy. So maybe that why flying saucers have maintained that form-factor for the over 2,500 years that they have been observed. They've hit the bottom of physics, and must employ such a toroidal system internally.

Just guessing. I really have no idea. Pretty cool to think about, though.

The more we learn, the more we realize we don't know. 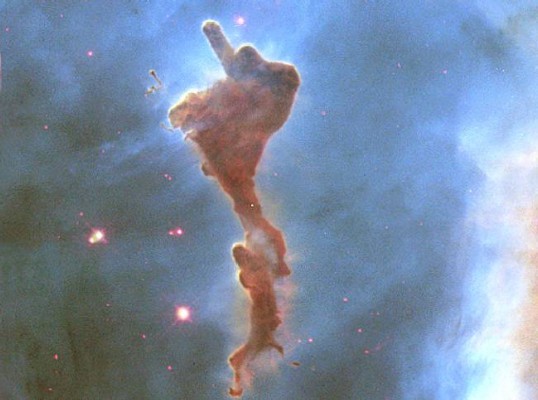