Think you're getting unbiased, balanced coverage of politics? Or is there a double standard in the way the media treat Republicans and Democrats, liberals and conservatives? My recent visit to the center of a media storm suggests there is. Consider this:

A $500,000 ad buy made by Swift Boat Veterans for Truth brings searing media scrutiny and "proof" of illegal coordination based on a lawyer (me) representing both the Bush-Cheney campaign and the Swift Boat Veterans; on an accountant working for Tom DeLay's political action committee; and on a $200,000 contributor to the group who is not a major donor to Bush-Cheney 2004 but who does know Karl Rove.

Meanwhile, the media give practically no scrutiny to a $63 million, five-month, negative-ad buy done by Democratic "527" groups (the Media Fund, MoveOn.org and others) with a revolving door of connections to the Kerry campaign. Consider:

• Bill Richardson simultaneously chaired the Democrats' national convention and a 527.

• Zack Exley went from being a MoveOn.org executive to the Kerry campaign.

The coordination law prohibits individuals from "using or conveying" information on the private "plans, needs or projects" of a campaign to a 527 or vice versa. If the media can scrutinize my legal work, which doesn't even fall under the anti-coordination rules, why can't they scrutinize these Democrats with equal diligence?

TOPICS: Editorial; News/Current Events
KEYWORDS: 527; billrichardson; democraticparty; doublestandard; haroldickes; ickes; kerry; lamestreammedia; mainstreammedia; mediabias; mediots; msm; richardson; sbvft; swiftboatsveterans; webofconnections Navigation: use the links below to view more comments.
first 1-20, 21-40, 41 next last
An excellent op-ed article. I only wish it were not in the WP you have to excerpt the article and really this is one that should be read in its entirety.
1 posted on 09/04/2004 8:23:58 PM PDT by Former Military Chick
[ Post Reply | Private Reply | View Replies]
To: Former Military Chick
Why aren't the media scrutinizing lawyers and advisers to Kerry?

Answered own question with the first line.

Do SOMETHING ABOUT IT!

Get your own "EXPOSE KERRY'S FRAUD SWIFT BOAT VETERANS FOR TRUTH" STICKER!

You can bet the DemocRAT 'smear the Swiftees' campaign will be kicked up to a whole new level now.

These Swiftee window stickers get the word out to the driving public, display public support for the SBVFT, as well as displaying the website address!

Swiftee window sticker thread - get yours! Freep mail for details.

I have no idea. I would have thought this would be equal opportunity. Where is the Times or FOX news with their investigative reporters. It is disturbing.

It would have been nice to post the entire article but I do hope folks will click on the link and read it there.

George Soros can contribute mega millions to moveon.org etc and a construction worker (believe this is what he did) from texas gives swift vets $100,000.00 to run a few commericfals and democrats go nuts.

Imagine! There ads work. So, naturally ... dems can't handle it.

John Edwards COULD have served during Vietnam BUT didn't.

1) Are you going to dump Edwards as your VP
because he didn't serve when he could have?

2) How's Al Hubbard now-a-days?
Is he getting ready to hit your campaign trail?

3) Is it true Jane Fonda is coming out to?

I agree with you. There is a bias in the media. Oddly enough the only reason I heard about this oped article was by a democrat on FOX yesterday.

I think Ginsburg did the honorably thing, but, in all honesty I might have stayed and said if you all clean house we will clean house. Betting Kerry's office will be empty. Shhh don't tell anyone! :)

11 posted on 09/04/2004 8:58:40 PM PDT by Alamo-Girl
[ Post Reply | Private Reply | To 8 | View Replies]
To: Former Military Chick
If the media can scrutinize my legal work, which doesn't even fall under the anti-coordination rules, why can't they scrutinize these Democrats with equal diligence?

law?..since when is it important to follow the law when your a democrat?
let's see...sandy berger was just sloopy, and lost things
800 fbi files in the white house for over a year and turn up suddenly...
(recounting a nixon guy went to prison for having ONE file)
and it wasn't in the white house when discovered
reminds me...what the lastest on berger?

Jane Fonda had the decency to apologize about 17 years ago for what she said about the Vietnam Vets.

What and GORE their own LumOx? 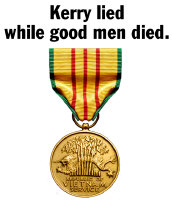 Because then they would have to report the truth

Hey pal, keep posting away on all these threads! You and your disabled Vietnam Veteran buddy who makes these stickers - ARE getting the word out there. I know it. And your buddy is DONATING ALL THE PROCEEDS of these stickers to the Swift Boat Veterans for Truth. AWESOME!

Keep up the great work!