She is on the cover of Playboy magazine, which hits the newsstands on Friday, coinciding with the opening ceremony, and she shares the cover of September's FHM Magazine with her fellow United States Olympians Amanda Beard, Haley Cope and Logan Tom.

Acuff looks downright demure smiling from the cover of Playboy in her practice uniform with her track spikes at her side. FHM, a milder version of Playboy that appeals to a younger demographic, has the women posing in white bikinis to draw readers inside to its "Sexy Olympic Special!"

The Olympians' attitudes about their status as pinups reveal a striking generation gap among female athletes. Unlike the national dialogue about empowerment and body image that followed Brandi Chastain's exuberant removal of her jersey in 1999 after she scored the decisive penalty kick against China to give the United States a victory in the Women's World Cup final, there has been little negative reaction to the Olympians' ubiquitous appearance in magazines. Even the United States Olympic Committee does not seem to object to the exposure.

Female athletes appear to be more comfortable combining sex appeal with athleticism at the peak of their careers. Katarina Witt, a gold medalist in figure skating in the 1984 and 1988 Winter Games, caused an uproar by posing nude in Playboy in 1998, long after she was finished as a world-class skater. Now, female athletes are showing off their bodies in nonsports magazines and making no apologies for it.

That is unlike four years ago, before the Sydney Games, when the swimmer Jenny Thompson's photograph appeared in Sports Illustrated - with only her fists covering her breasts - and generated controversy. At the time, Donna Lopiano, the executive director of the Women's Sports Foundation, told reporters, "Any exposure in a sports magazine that minimizes athletic achievement and skill and emphasizes the female athlete as a sex object is insulting and degrading."

Now, most of the athlete-models say they have enjoyed the exposure and look at it as a means to an end. In the 1996 Atlanta Games, at age 14, Beard gave the world an iconic image when she toted a teddy bear to the starting blocks for the final of the breaststroke. More recently, however, she has posed for magazines like FHM and Maxim in swimsuits that will probably not help her break the world record she holds in the 200-meter breaststroke.

"I'm not quite sure what other people think about the recent magazines, but, for me, personally, I have fun doing it and I enjoy it," said Beard, who already owns an Olympic gold medal, two silvers and a bronze. "It's a chance for me to branch out of swimming and kind of experience some other things like modeling and stuff."

Dominique Dawes, a three-time Olympic gymnast and now the president-elect of the Women's Sports Foundation, said Acuff, Cope, Beard or any other female athlete had earned the right to choose where and how they appeared in the media. She also said the magazine portrayals should not diminish the strides women have made in Olympic sports, but rather celebrate their independence.

"It's a personal choice, and if an athlete wants to portray herself in a certain light, it's up to her," said Dawes, 27, who was a member of the 1996 gymnastics team that won the gold medal. "It's not anything I would do, but sports and sex has always sold. I think women have earned the right to make those kinds of decisions."

Acuff, 29, is matter of fact about her decision to appear nude in two pages of Playboy's 12-page pictorial. Eight Olympic hopefuls posed in the issue, and five are here competing, including Cope, the American backstroke specialist. Unlike when she was on the FHM cover, however, Cope is identified by her married name, Haley Clark. The other Olympians are a pole-vaulter from Hungary, a sprinter from Ukraine and a long and triple jumper from Latvia.

During a telephone interview Wednesday from Crete, Acuff said she agreed to appear in the magazine as long as the photographs were tastefully executed and did not require her to show full frontal nudity. Acuff said she accepted the assignment for the most basic of reasons. "I did it for the financial aspect," she said. "It's really hard to make that kind of money in the real world."

She would not reveal how much she was paid, but beginning Friday she will write about her Olympic experiences in a diary on playboy.com.

Cope, 25, was not available for comment here yesterday, but acknowledged to Playboy that her friends call her the Olympic nudist.

"People aren't comfortable with themselves," she is quoted as saying in comments that accompany her two photographs. "I'm a freak. I vote Republican, I worship Martha Stewart and I don't mind being naked."

The United States Olympic Committee spokesman Darryl Seibel said Wednesday that he met with his staff members a year ago, and they decided against pursuing placements in magazines like FHM and Playboy. Still, a file in the media center here available as a research tool contained many of those same spreads, and the Olympic committee has aggressively marketed the women to consumer-oriented publications and broadcast outlets, even helping the American softball pitcher Jennie Finch land a spot in People as one of the 50 most beautiful people.

"We think it's important to reach out to large audiences," Seibel said. "We also think it's important that it be done in a tasteful way. Those placements'' - in Playboy and FHM - "were made by the athletes and their representatives, and neither we nor their national governing bodies had anything to do with it."

Finch, along with the swimmer Michael Phelps, is expected to be one of the Athens Games' breakout stars. Like Phelps, she has landed lucrative endorsements, but she also understands that the attention she has attracted for her looks may have eclipsed her athletic achievements. In a news conference here Tuesday, one of the first questions she was asked was about how it felt to be called one of the hottest sports figures among Internet users.

"I'm here as an Olympic athlete," Finch said. "I'm here to win a gold medal and to compete on the mound. At times it can get a little frustrating. You want to be known for what you do on the field."

Her teammate Lisa Fernandez, who has won two gold medals, appreciates the interest Finch has generated. She also understands there is a price to pay when combating a double standard.

"I hope that at some point society is going to take appreciation of what we have," Fernandez said. "You don't look at the male counterpart and see that they put some great-looking guy on the cover of Sports Illustrated simply because of how he looks." 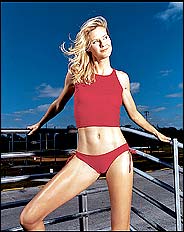 The Times also offers one of their "interactive features" with more info and more images. I'm not sure how to post a link to that feature -- maybe someone else will do it. It looks good.

the only steroids she's on is ESTROGEN !!!!!

Now, female athletes are showing off their bodies in nonsports magazines and making no apologies for it.

A bulemic android. Why on earth is Playboy interested in her? She couldn't make the cover of TIGER BEAT!

Gotta agree. Another 25 pounds and you'd have something to hold onto.

Tigers would want more meat than that! :o

It was fascinating reading. (It was so pleasant to learn that the Olympics routinely orders tens of thousands of condoms just for the athletes' use, and usually runs out.) Sadly, "Men's Journal" has no online archives, so the best I can do is provide a link to a Sydney Morning Herald article ripping off the MJ article.

Yeah, it may have been the same in ancient times also. I'm just very relieved (and happy!) that the focus has shifted from the old homoerotic images to the modern images of fit women.

Yes -- thankyou for making a very good point. I agree.

thanks for the thumbnail

There's skinny, and then there's bony.

As I recall, athletes are given all the condoms they want during the Olympics as a way to promote safe sex (and better international relations?). Thousands were distributed in the last winter Olympics.

"There's skinny, and then there's bony"

True, the diminishing return thing would apply here too.

"They're there to screw and drink on other peoples' dimes."