April 22, 1971 -- John Kerry testifies on behalf of the VVAW before the Senate Committee on Foreign Affairs. He claims that American soldiers had "personally raped, cut off ears, cut off heads, taped wires from portable telephones to human genitals and turned up the power, cut off limbs, blown up bodies, randomly shot at civilians, razed villages in fashion reminiscent of Genghis Khan..."

Every action produces a reaction.

You couldn't really call it a village.

I'm not really sure what you would call it. It was just a collection of lean-to's...tents and just plain 'any-spot-in-the-storm-will-do' types of shelters.

It was as if the old people and the young people had walked as far as they could...and it was just the spot that they stopped and tried to put together a reasonable image of their lives. It had water and was somewhat close to a road.

And...it was as far as they could go to get away from the war....and the soldiers of the NVA(North Vietnamese). The same NVA that had driven them away from the highlands of Vietnam. From their homes....from their lives.

That little spot in the road had around 25 people living there...mostly the old but a few young. One of them was pregnant. Luckily,for awhile anyway, a Medical Mission was nearby.

We used to patrol that area around every 3-4 days. Nothing major..just a platoon. The LT. liked to call that patrol his 'breaking-in' for newbies...for those who had just arrived 'in country'. It gave you a feel for the landscape...and it reminded the newbies that altho we were Air Cav....we also were expected to walk to earn our money.

On one patrol..we found out that the Medical Mission had left the area...and the pregnant woman was about to give birth. Being the only person on the patrol to even remotely have Medical training...( I served as a Medic)...I was volunteered by the LT. to help with the birth. One of the really old (ancient comes to mind) women knew about child-birth but was physically unable to help. Since we had a ARVN(South Vietnamese) interpreter along...I became her hands...as long as the ARVN interpreter could keep up.

The child was born into the world on May 15,1971. A little girl...all healthy as could be. We left her in the arms of her proud mother...and finished on with the patrol. (and I got the ribbing of my life about the whole thing...good natured...but it lasted for days).

The NVA activity started to pick up in the area. It seemed as if they thought we wouldn't fight back if we saw them...or came under fire. They started to get a little bolder....as they were sending out lots of patrols into the area around Pleiku..and further south.

On our next patrol into that area...we ran into a NVA patrol. Had a small firefight. Had to only work on a few minor wounds.

Then we came upon the small little spot...where the old and young had stopped to try and live.

The lean-to's were burned....the tents torn. Fire was still burning some of the bigger shacks.

The old and young people had been lined up and made to kneel...where they had had a gun pressed to the back of their heads. I know this is what happened...as each of them had a hole in the backs of their head...one made by a bullet.

The boot marks on the ground (that red dirt that seemed to exist everywhere in Vietnam)...were of standard issue NVA. So...the people who had done this were probably NVA.

I checked all that I could ...looking for even a glimmer of life. There was none.

Then I remembered the young mother....and the baby that I helped to deliver.

I searched the area..(with my back being watched by my Platoon Sgt.)...and came across them a few yards into the bush.

The young mother lay on the ground...and bullet hole in her head and laying in her arms was her baby daughter.

With a bullet hole in her head.

I came face-to-face with it on that day in Vietnam.

This is the 3rd time I've talked about that day in 30 plus years. I'm not sure if I can talk about it again ever.

But the same evil that I found in the highlands of Vietnam...exists today.

Lied to them to facilitate the Evil.

And now...that same liar ...that same self-serving arrogant bastard is running for President.

I cannot prove it...but I have always believed that the actions of people like Kerry...facilitated the death of that young mother and her baby.

I would hate to think of a world...were someone like Kerry had as much power as a President of the United States has.

What would be the consequences????

TOPICS: Editorial; Foreign Affairs; Government; Miscellaneous; News/Current Events; Politics/Elections; War on Terror; Your Opinion/Questions
KEYWORDS: aidandcomfort; communisthero; elections; johnkerry; kerrytestimony; kerrywasinvietnam; liedunderoath; lyingliar; traitor; treason; vietnam; vietnamwar; warcrimes Navigation: use the links below to view more comments.
first 1-20, 21-40, 41-60, 61-80 ... 121-134 next last
"I VOW I will do everything I LEGALLY can to keep this traitor from being elected. "
68-69TonkinGulfYachtClub

We have a REAL choice this election....

I would like to think that Kerry has grown up since then, but I'm not willing to take that chance. The only prudent way to vote is to support W.

I cannot prove it...but I have always believed that the actions of people like Kerry...facilitated the death of that young mother and her baby.

Of course they did, just as they have in Cambodia,Laos,Afghanastan, Iraq,
Iran, Israel and other places around the globe.

Kerry is just the liberals trying to use patriotism to gain
the power that Clinton lost for them.

He and Herself must never be allowed to gain that power again.

Especially since we have met in person.

We MUST stop this traitor!

God Bless You and your family.

MUST READ by redrock PING

If you are a servicemember stationed in CONUS or overseas, you can register to vote absentee.

The UOCAVA (Uniformed and Overseas Citizens Absentee Voting Act)
requires that the states and territories allow certain U.S. citizens, as defined below,
to register and vote absentee in elections for Federal office.
These groups include:

Eligible family members of the above

IMPORTANT DATA
Military Voting for 2004
YOUR VOTE will count!

Originally posted by MoJo2001 and The Sailor

Which candidate do you think the terrorists want to win?

I know what you've experienced.

I saw a couple of similar instances of the same sort of thing in the Soui Ca valley the year before. They wiped out an entire family including a 3 year old boy. Hung them in the village square on the eve of the elections. father was the local mayor. As though a 3 year old boy could add anything to the war effort.

The platoon was different for quite a while after that.

I never saw a GI exhibit any cruelt toward the civilians. Usually it was the exact opposite. The desoicable NVA and VC were exactly the opposite. Yet, with the leftist re-writing of the history of the war, in the popular mind it was the GI that was the 'Baby-killer'.

I blamed the atrocities you and I, and I'm sure many others, saw on the anti-war traitors then and still do.

My daughter (the Conservative) was born at 11:20 PM that day. 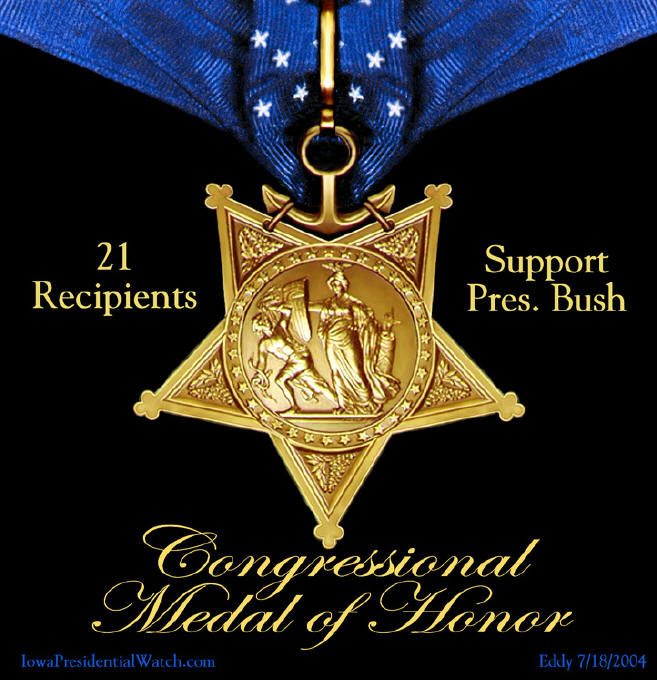 We watched a documentary on Discovery Times channel last night about Viet Nam. And about a month ago I forced hubby to sit thru the "Killing Fields" movie. There was some liberal stuff in the movie, but it showed the philosphy of the NVA Communists/Cambodian communists. I am learning all I can and I am thankful to people like you and Tonk who are out there getting the truth out thry all the fiction. Bless you! And may John Kerry rot in...well, you know.

Thanks for the ping! As for you gentlemen, we know you were a bunch of babykilling murderers. John Kerry says so and he has to be right. Right? After all, he's the presumed Democratic nominee. He must be telling the truth. I think. Right? :)

Kerry to heckler: 'I never run away from a fight,' especially with Bush (What a Jerk Alert!)

"On the April 18 Meet the Press, Tim Russert played a clip from Kerry’s April 18, 1971 appearance on the show. Kerry had asserted:

- “There are all kinds of atrocities and I would have to say that, yes, yes, I committed the same kind of atrocities as thousands of other soldiers have committed in that I took part in shootings in free-fire zones."

- "I conducted harassment and interdiction fire."

- "I used 50-caliber machine guns which we were granted and ordered to use, which were our only weapon against people."

- "I took part in search-and-destroy missions, in the burning of villages."

- "All of this is contrary to the laws of warfare."

- "All of this is contrary to the Geneva Conventions and all of this ordered as a matter of written established policy by the government of the United States from the top down."

I have learned one thing very well over my 71 years on this earth. As a rule, the only thing that happens to young sonovabitch as he ages, is that he turns into an old sonovabitch.