He was dying for years and the day came and somehow it came as a blow. Not a loss but a blow. How could this be? Maybe we were all of us more loyal to him, and to the meaning of his life, than we quite meant to be.

And maybe it's more.

This was a life with size. It had heft, and meaning. And I am thinking of what Stephen Vincent Benet, a writer whom he quoted, wrote on the death of his friend Scott Fitzgerald. "You can take off your hats now, gentlemen, and I think perhaps you'd better."

Please FReepmail me if you want on or off my infrequent ‘miscellaneous’ ping list.

"Good on ya",indeed, President Reagan...I know you are Home now.

Today I imagine saluting right back. Do you? We should do it the day he's buried, or when he lies in state in the Capitol Rotunda. We should say, "Good on you, Dutch." Thanks from a grateful country.

God has a special place for those who did as much good as RR did.

The best I can hope for is that in the next life I will be able to walk and talk with this fabuluous man (I have to assume we don't get a better mind in Heaven, since we could only appreciate the good ones God handed out).

My life is better to have been an American when President Reagan was in charge... I am honored to have served under him. He made us feel like we mattered and what we fought for was right. And above it all, he was right. SO much more today as the battle is no longer communism, but terrorism. We must continue the fight, and win this war as well.

God Bless You President Reagan, you will be missed....

13 posted on 06/06/2004 10:56:24 PM PDT by lainde (Heads up...We're coming and we've got tongue blades!!)
[ Post Reply | Private Reply | To 3 | View Replies]
To: KentTrappedInLiberalSeattle
Peggy mentions that Reagan was turned down for combat duty because of his poor eyesight. Thus he served stateside working on training films during WWII. However, it is little realized that Reagan joined the reserves before WWII and then cheated on the eye test so he could get in the military. Quite the opposite from you know who, who cheated to stay out. 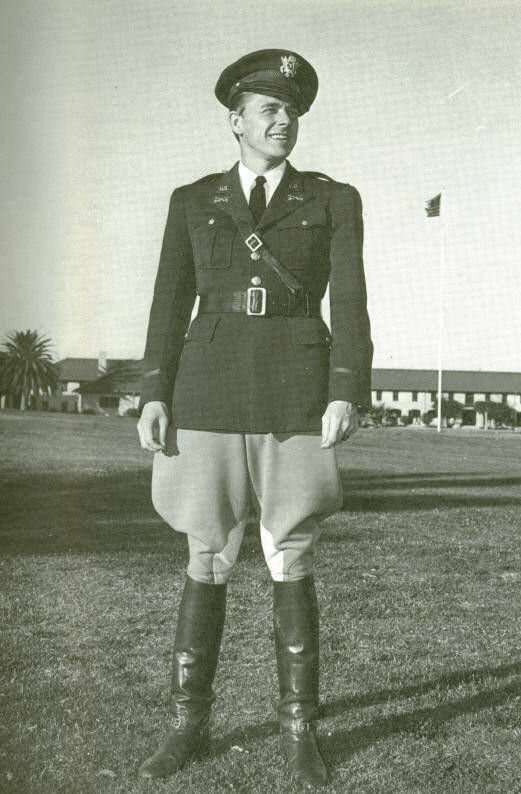 Ronald had a passion for riding horses. A friend (and a reserve officer in the cavalry) had suggested that Reagan apply for a commission, giving him access to army horses and all the free riding he could want. The idea appealed to Reagan until he learned that eyesight was of primary importance in the commisioning of a cavalry officer. Reagan at this time wore glasses and would later wear corneal lenses once they became available. But in 1935 he became a reserve second lieutenant with the 14th Cavalry Regiment at Des Moines by the simple expedient of cheating! During his medical examination, instead of a piece of cardboard, he held his hands over his deficient eyes and peeped through the slight gaps between his fingers. This had the same effect as punching a pinhole in a cardboard, producing the effect of a corrective lens for a nearsighted person.

Because of his commission in the cavalry reserve, Reagan was made a second lieutenant in that branch of the service.

Source is from the website covering his birthplace http://www.tampicohistoricalsociety.citymax.com/albums/album_image/359307/88964.htm

That so many on the left can not see, or will not admit, the enormous preponderance of good in the ledger in which the deeds of Ronald Reagan are entered, bespeaks the totality of their moral and intellectual bankruptcy. We must not let such villains gain the power to lead us to ruin.

15 posted on 06/06/2004 11:27:10 PM PDT by luvbach1 (Reagan won the cold war. Of course the left isn't impressed since they rooted for the other side.)
[ Post Reply | Private Reply | To 10 | View Replies]
To: KentTrappedInLiberalSeattle
If you never post again, you have done enough with this post. Thank you.

Thank you, Peggy. I'm ready to salute to him, too.

16 posted on 06/06/2004 11:58:26 PM PDT by Ruth A.
[ Post Reply | Private Reply | To 1 | View Replies]
To: KentTrappedInLiberalSeattle
"Ronald Reagan told the truth to a world made weary by lies. He believed that truth was the only platform on wich a better future could be built. He shocked the world when he called the Soviet Union evil, because it was an empire, because it was that too. He never stopped bringing his message to the people of the world. To Europe, China, and in the end, the Soviet Union. And when it was over, the Berlin Wall had been turned into a million souvenirs, and Soviet communism had fallen. But of course it didn't fall. It was pushed. By Mr. Know Nothing Cowboy Gunslinger Dimwit. All presidents should be so stupid."

This is definitely a must read. I love the way Peggy Noonan writes. What a fabulous tribute to a wonderful man who will go down in history as one of the greats of our time.

And note that the criticism of Ronald Reagan sounds familiar.

That so many on the left can not see, or will not admit, the enormous preponderance of good in the ledger in which the deeds of Ronald Reagan are entered, bespeaks the totality of their moral and intellectual bankruptcy.

Some of it though,sounds like the sort of things currently being said about Bush.