WASH TIMES 2/11 Rep. Sam Johnson, Texas Republican, who spent nearly seven years in a prisoner-of-war camp in Vietnam, said yesterday the photograph of Mr. Kerry with Miss Fonda will hurt him nevertheless. "I think it symbolizes how two-faced he is, talking about his war reputation, which is questionable on the one hand, and then coming out against our veterans who were fighting over there on the other," Mr. Johnson said. Mr. Johnson recalled that his North Vietnamese captors played recordings of Miss Fonda telling U.S. troops to give up the war. "Seeing this picture of Kerry with her at antiwar demonstrations in the United States just makes me want to throw up."

TOPICS: Activism/Chapters; Announcements; Constitution/Conservatism; Front Page News; News/Current Events; Politics/Elections
KEYWORDS: 2004; assassinationplot; barnes; brinkley; camil; darkplot; dossier; dubose; hanoijohn; hunt; johnkerry; kansascitymeeting; kerry; kerrydossier; kerrylies; kerryrecord; lipscomb; lurch; nicosia; scottcamil; swiftvets; vvaw Navigation: use the links below to view more comments.
first previous 1-20 ... 161-180, 181-200, 201-220 ... 621-638 next last
To: Seamonster
Could be anyone... 'Course a person could just use a good old copy machine. ;) Did you check out the link with Ed Kennedy or was it too much of a pain?

If it's a fake, I have no intention of using it.

The image of John Kerry's head from the picture in question was used in an earlier photoshop by Registered. I'm pretty sure that if Registered had a photo of John Kerry on the same stage as Jane Fonda that was a clipping from a newspaper (as the photo in question seemed to be) he would have posted the entire photo a lot earlier.

In addition, Registered was not very forthcoming in answering whether the photo was a fake. He said, "I don't know" or something like that. He does know - he just didn't want to answer or thought it was funny or something.

Then he changed the photo at the link supplied to his previously posted photoshop.

Additionally, the sun is hitting John Kerry on his right side and Jane Fonda on her left side. My guess is that Jane Fonda was photoshopped into the original B/W picture and the headline and text was added to make it appear to be a legitimate scan of a newspaper clipping.

That would be fine if there had been some indication that the photo was fake. Simply having Registered's trademark on the pic would have done it for many.

Paging Registered. You've created a small controversy here. Please check in and clear this up.

Kerry ran for election to the U.S. House in 1972 during which he found it necessary to suppress reproduction of the cover picture appearing on his own book, The New Soldier. His political opponent pointed out that it depicted several unkempt youths crudely handling an upside down American flag to mock the famous photo of the U.S. Marines at Iwo Jima.


Answer- yes he has. His service was heroic and admirable. He earned every metal and the right to condemn an illegal and immoral war (both Vietnam and Iraq- both drummed up for political gain and both sold to the American people with lies).


Kerry has released all of his military records- not just pay stubs and torn, poorly zeroxed forms. Real question is: how will Bush explain refusing his physical and being grounded. I've read several places at FR what a dangerous job it is to fly jets and how brave Bush was to do so- then why did he refuse his drug test and get himself grounded???

This is the quote from the original interview with Kerry in the Harvard Crimson, 1970:

"When he approached his draft board for permission to study for a year in Paris, the draft board refused and Kerry decided to enlist in the Navy."

Then there is a question about why wasn't Kerry court-marshalled, when he refused a direct order from his superiors. (from same article)

"One time Kerry was ordered to destroy a Viet Cong village but disobeyed orders and suggested that the Navy Command simply send in a Psychological Warfare team to be friend the villagers with food, hospital supplies, and better educational facilities. "

SEATTLE -- The wife of Democratic presidential candidate John F. Kerry said yesterday that suspected terrorists held at Guantanamo Bay should be given prisoner of war status.

"They were captured while fighting a war," Teresa Heinz Kerry said at an informal discussion with minority activists in Seattle. "They should have the rights that other prisoners of war have had."

Heinz Kerry said that denying the detainees the protections of the Geneva Convention is "insulting, ignorant, and insensitive" to the rest of the world.

She added that under President Bush, the United States, once known as the standard-bearer for human rights, is now considered a hypocrite.

"The arrogance shown by this administration on human rights and in its foreign policy is horrible," she said.

Some 660 people suspected of taking part in terrorist activity are being held at the prison on the US naval base at Guantanamo Bay, Cuba. Many were captured in Afghanistan and Pakistan two years ago in the war on terrorism and are believed to be members of Al Qaeda or the Taliban.

The Bush administration has said its top priority is interrogating the detainees for intelligence on any planned terrorist attacks. A spokeswoman for the Kerry campaign said Senator Kerry supports his wife's position that the detainees should be given basic protections such as the right to an attorney. 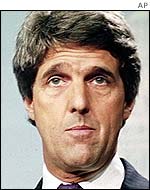 Kerry voted for this act