Palestinians on Sunday failed to reach agreement on a truce offer to Israel after three days of talks mired in arguments.

A top Hamas official told reporters that there would be no closing announcement to the failed ceasefire talks between terrorist factions in Cairo, Sunday.

According to chief representative for the Islamic Jihad, the talks failed due to disagreement on the level of ceasefire to be offered – whether it would be atotal or only limited to within the "green line."

Hamas founder and spiritual leader Ahmed Yassin has told a German magazine that a Jewish state could be established in Europe. In interview excerpts slated for publication on Monday in Der Spiegel, Yassin opposed a two-state solution in which a Palestinian state would coexist next to Israel.

"That would not work," he said. "The Israelis claim 80 per cent of the territory and will only let us have 20 per cent. It would only be an interim solution."

Asked if there was no place at all for a Jewish state, he said, "They could set up a state in Europe." Yassin also rejected the Geneva Accord, which was hammered out between Israeli politicians and Palestinian representatives. "That plan is worse than the Oslo one, because it abandons the right of return for the refugees," he said.

Maher Taher, a senior delegate for the Popular Front for the Liberation of Palestine, said the factions "had different positions so we didn't agree."

While the talks dragged on here, Israel made clear it would only accept a wide-ranging truce that halted all violence.

The broad truce urged by Fatah and several smaller factions would have halted attacks on civilians inside Israel as well as on Israeli soldiers and Jewish settlers in the West Bank and Gaza Strip, in exchange for Israeli reciprocal actions.

Hamas, the smaller Islamic Jihad and three Syrian-based factions wanted a limited cease-fire affecting only civilians inside Israel. Hamas and Islamic Jihad are responsible for most of the suicide bombings in Israel that have killed hundreds.

In the end, the two sides said they would continue the negotiations later but gave no date. From the Cairo meetings, they said, all that could be expected was a final statement.

"The statement will have no mention of refraining from attacks on civilians, cease-fire or authorizing Abu Ala (the Palestinian prime minister)" to negotiate with the Israelis, said Samir Ghosheh, head of the Palestinian Struggle Front, one of the more than a dozen groups that attended the Palestinian talks.

Taher confirmed the outcome. When asked if the final statement would make any mention of the cease-fire options or giving authorization to Qureia, he replied: "None of the above ... and so we will end with a press release."

Along with the broad cease-fire, Hamas and other militant factions had strongly opposed giving Qureia authority to speak for them in any negotiations with Israel.

"We are not ready to give them (the Palestinian Authority) authorization to sign a new agreement," said senior Hamas official Mohammed Nazzal.

Qurei returned to Ramallah empty-handed, saying his objective now was to try and reach a truce between the Palestinian Authority and Israel. "There can be no unilateral or free hudna [temporary truce]," he said.

Representatives of various Palestinian factions had been trying to work out a compromise on a conditional offer of an end to attacks on civilians in Israel. But the proposed compromise would not have stopped attacks on settlers and IDF soldiers in the West Bank and Gaza Strip.

Israel had earlier on Sunday repeated its rejection of any partial agreement that would leave settlers and soldiers in the West Bank and Gaza Strip outside of a ceasefire. "Israel of course can't differentiate between citizens and soldiers," he said, or whether he lives here or there."

Sharon said if violence stops, Israel would scale back its military activities. "Of course if terror activities continue, Israel will feel responsible for the defense of its citizens and Israel will act," he warned after meeting Israel's president Sunday afternoon.

"Israel understands only the language of violence and what we are doing is aimed at liberating the land, ousting the occupation and preserving the holy sites. We can't accept a hudna similar to the one we had in June. The Palestinian people want their freedom and independence and Israel must pay the price for a hudna by halting the construction of the fence and settlements."

"Our final response is that we are not ready to declare a new ceasefire,'' said Muhammed Nazzal, a member of the Hamas delegation to the talks. "Hamas rejects the hudna and won't accept it, because our reading of the current political situation shows that the Americans and the Zionists are in deep crisis because of the continuation of the resistance in Iraq and Palestine."

He said there was a wide gap between Hamas and Fatah on the shape and content of the proposed truce. "This is a very big issue concerning the future of the Palestinian people," Nazzal said.

Nazzal ruled out the possibility that the failure of the Cairo talks could lead to inter-Palestinian fighting. "The Palestinian factions have reached a level of awareness and responsibility that do not allow them to be affected by any political differences," he added. "Internal fighting is a red line, and any confrontation on the ground is also a red line. The weapons will be directed only against the enemy."

Maher Taher, a senior delegate from the Popular Front for the Liberation of Palestine, said disagreements over whether to offer a full cease-fire or a limited truce that would only stop attacks inside Israel could not be bridged. "There are disagreements about the nature of a cease-fire," he told The Associated Press.

"The factions have different positions on the issue."

When asked whether the statement would include reference to halting attacks on civilians, a broader cease-fire or a mandate to the Palestinian Authority to negotiate terms with Israel, he replied: "None of the above ... and so we will end with a press release."

A spokesman for Islamic Jihad said his group would not "sacrifice its values so that [US President George] Bush can win re-election." Meanwhile, bureau chiefs Dov Weisglass and Hassan Abu Libdeh concluded a two-hour meeting in preparation for the expected Sharon – Qurei meeting.

Israeli officials have rejected an agreement between Palestinian factions meeting in Cairo to halt attacks on civilians inside Israel, but without declaring an end to attacks against soldiers or settlers in the territories.

The officials said the government of Prime Minister Ariel Sharon will reject any cease-fire offer that does not include a complete halt of violence against all Israelis, and does not dismantle the Palestinian terror infrastructure in line with the demands of the road map peace plan.

Herb Keinon and AP contributed to this report.

1 posted on 12/07/2003 6:39:47 PM PST by Alouette
[ Post Reply | Private Reply | View Replies]
To: Alouette
"Hamas founder and spiritual leader Ahmed Yassin has told a German magazine that a Jewish state could be established in Europe."

I've got a better idea! We could establise a Palistinian state in Europe, I understand there is some prime real estate just outside of Paris that you could take over. I sure Chirac would love to have you for neighbors


Regards: Blastdad
2 posted on 12/07/2003 6:50:08 PM PST by blastdad51 (Proud father of an Enduring Freedom vet, and friend of a soldier lost in Afghanistan)
[ Post Reply | Private Reply | To 1 | View Replies]
To: Alouette
In my opinion, they dance around the bushes. Either way, they just plainly don't want Izrael at their side. And that is a fact.

I've think we should just drive them out of all of Israel and let the peace loving Muslims take care of them. They'll wish they were back under Israel.

Wait, I thought it was about the West Bank and Gaza /sarcasm (and that is how the rest of the world thinks, including the Bush administration).

The Palis won't declare an end to hostilities until Israel ceases to exist.

That is not acceptable. Until their mindset changes, they will get nothing.

That's all it has ever been.

every U.S. President since about 1967 understands that if they don't get this monster under control, we're going to have nuclear war in the Middle East ... a sizable regional nuclear war ... at this time, it would most likely be Israel nuking the Arabs who won't let them live in peace in a small strip of land ...

So, with every administration comes the positive thinkers who believe this is simply a territorial issue and the hatchet can be buried and 6 million Jews will be able to sit down and sing "kumbaya" with 500 million Arabs around them (not the whole 1.3 billion, but I can't remember how many are in the area ... 700 million?) ...

nonetheless, God said He would make Jerusalem a burdensome stone for the nations ... nobody can solve this problem ... that's one reason I believe the prophecies ... the Arabs will never allow the Jews to live in peace ... not for any length of time ... no amount of dealing or land concessions will appease them ...

moo ha medd told his followers of the moon gawd that the "last hour" or final hour (of the world) will not come (i.e. cannot come) until the mooselimbs fight the Jews and kill them ...

I have little doubt they will try ... 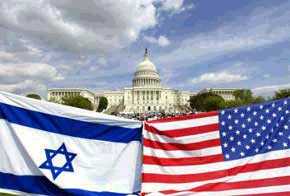 If you'd like to be on or off this
Christian Supporters of Israel ping list,
please FR mail me. ~

There failed not ought of any good thing which the LORD had
spoken unto the house of Israel; all came to pass. (Joshua 21:45)
Letter To The President In Support Of Israel ~
'Final Solution,' Phase 2 ~

What exactly is the point of "talking" with these people?