Notice how calm Bill Gates is as he just rattles off now that the MRNA vaccines are an abject failure. No big deal!
pic.twitter.com/TsqsyG7jEY— Buck Sexton (@BuckSexton) January 25, 2023 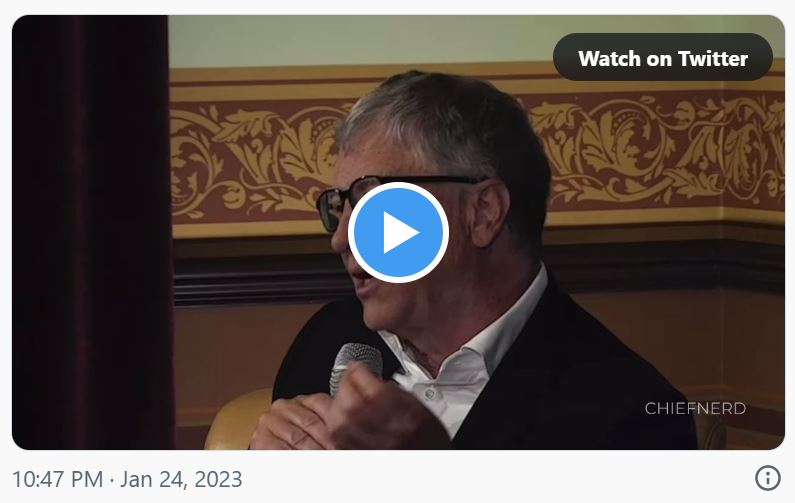 How did this bit-twiddler suddenly become an expert on public health? He’s a programmer FFS.

Where is the pie thrower when you need him?

No legal immunity for these genocidal creeps. Bring them out into the sunlight.

Not even that as much as he bought/stole tech and marketed it as his.

Why should he care. He didn’t put those chemotherapy drugs in his body.

I believe the virus was loosed for the purpose of getting as many injected with the mRNA therapy and then as per WHO and WEF , the plan is to require passports.

Tho these ideas have cooled somewhat in US for now, they are still being planned for. There were some very evil blue state bureaucrats who wanted camps, data bases and tracking. I think it naïve to believe they would not rise up again if given the opportunity.

IMHO, Gates wants contracts on the tracking software....Sort of like IBM did with punch cards used in Nazi Germany for tracking. I have heard this from others.

I will never forget when I was finally old enough to question media. VERY FAMOUS NFL quarterbacks were endorsing things that had nothing to do with their world.

Also, working in a grocery store, when the previously New & Improved was now Newer & MORE Improved. The real kind of ‘woke’ realizing all the horsepuckey that is out there.

Bill do you know that a majority of the people would like to see you hang? You better keep your head on a swivel you freakin pedophile mass murder .

His programming skills did not make his company successful.

He was visionary in how he marketed it. That was what gave him his success.

He has lots of personal issues. Have not seen much coverage of his X wife. She knows what the reality of his personal problems are.

Bill Gates pointed out Covid mRNA vaccines are not perfect in three ways.

Not that they are an abject failure.

You have to be a major dummy to come to that conclusion.

You have to be a major dummy NOT TO draw that conclusion...

Need one of these with Fraudci too.

I say inject him with a thousand COVID vaccines.

A visionary? Nope - total fraud everything he had was handed to him. And every time they ‘upgraded’ their software expect problems bc everything gets moved around and/or renamed, along with new bugs, no standards but always more money gimme gimme gimme...

There is nothing endemically wrong with mRNA vaccines as a delivery vehicle. There IS a problem with COVID spike proteins.