A new analysis of IRS data shows the financial consequences of gaining or losing population can be either extremely rewarding or devastating to individual states. In 2020, blue states repelled the highest earners while red states attracted them, resulting in massive economic losses and gains.

Wirepoints, an Illinois-based research organization, took a look at the latest migration data released by the IRS and drew some conclusions that should leave Democrat-run states in a cold sweat, wondering how they’ll ever be able to maintain their profligacy.

In the competition for America’s best and brightest residents, the most populous blue states are becoming perennial losers. In 2020, New York, Illinois, California, Massachusetts, and New Jersey suffered net losses in their population, with high-earners taking their income — and tax base — with them:

Not only are fewer people moving into these sputtering states than are moving out, but the newcomers tend to bring less wealth with them than the leavers took. For example, people who moved to Illinois in 2020 made, on average, $30,600 less than those who departed. When taken as a percentage of the state’s 2019 AGI, this was a 1.9% loss for Illinois, making it second only to New York state for lost income as a percentage of state AGI. 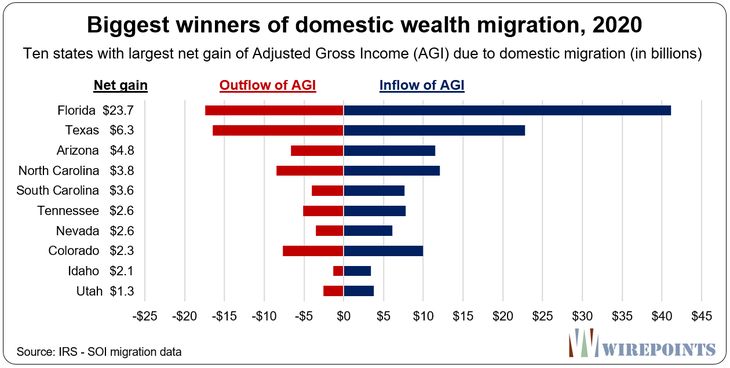 People won’t be actual slaves. They won’t be owned. They won’t be property. But they will be tied to the land. You can’t relocate. Live and work on your designated plot and pay your taxes to be local Lords. And you will be happy.

All part of the “get woke, go broke” program.

All fine and dandy as long as they keep those blue-state pinko policies away.

Yeah, and they’re coming to Tulsa and Oklahoma City and turning our state purple. I really, really hate those cockaroaches.