Super Flower Blood Moon lunar eclipse: Is it the 1st of 4 supermoons? By Elizabeth Howell published about 6 hours ago

Retired astrophysicist Fred Espenak has been observing the moon for about 60 years.

Retired NASA eclipse scientist Fred Espenak has been watching the night sky ever since he was eight years old, and plans once again to look up for the forthcoming lunar eclipse Sunday (May 15).

After about six decades staring at the sky, the Arizona resident said he still enjoys watching the shifting of the shading as the moon turns red during a total lunar eclipse, going fully into the Earth's deep shadow. Read our full guide for the Super Flower Blood Moon lunar eclipse to prepare for the epic lunar event.

Looking for a telescope for the lunar eclipse? We recommend the Celestron Astro Fi 102 as the top pick in our best beginner's telescope guide.

"You look at it 10 seconds before or 10 seconds after, you can't tell the difference," Espenak told Space.com of lunar eclipses. "It's more of a gradual effect. From minute to minute you can see changes, but from second to second you can't."

The Flower Moon's eclipse will be visible in total phase from portions of the Americas, Antarctica, Europe, Africa and the east Pacific. This eclipse will feature a moon that appears slightly large, at the edge of supermoon status. If you're hoping to photograph the moon, or want to prepare your gear for the total lunar eclipse, check out our best cameras for astrophotography and best lenses for astrophotography. Read our guides on how to photograph a lunar eclipse, as well as how to photograph the moon with a camera for some helpful tips to plan out you lunar photo session.

Not everyone agrees that the full Flower Moon is a supermoon due to varying definitions. Espenak's definition is based on the first-ever supermoon, when astrologer Richard Nolle in 1979 defined it as a full moon that comes within 90% of its closest point in the orbit to Earth.

"That's the definition that I use, because that was the first one. As far as I'm concerned, that sets the precedent," he said. "But first of all, that 90% is purely arbitrary. There's no real justification for why it should be 90%, or 89 or 91."

But Espenak calculates supermoons to also account for changes in the moon's orbit during each lunar cycle, including the perigee (closest point) and apogee (furthest point). NASA, which follows the strict 90% definition, says the Flower Moon is not a supermoon, but that June's full moon will be.

Espenak's rationale comes down to lunar variability. "The perigee point and the apogee point of every single [moon] orbit varies from one orbit to the other," he said. That's because the Earth and the sun's gravity pull on the moon across its orbits.

"The limits of what you get as a supermoon varies from one orbit to another," he added. "So, in order to determine whether a particular moon is a supermoon or not, you have to look at the specific orbit of the moon during that lunation cycle." (A lunation is a lunar month, or the time elapsing between new moons.)

A visibility map of the May 15 to 16, 2022 Super Blood Moon total lunar eclipse. (Image credit: NASA's Scientific Visualization Studio) Epsenak's definition of supermoon will put the next four full moons in a row as supermoons: May 16, June 14, July 13 and Aug. 12. But he noted that streak is not particularly uncommon. Per his website, 2023 will also see four consecutive full supermoons, as will 2024. Even 2025 has three in a row.

"Every 14 months or so, you get a series of moons that are further than that 90% threshold. So very often, every 14 months or so, we get two or more likely three to four," he explained. He added that the relative size of the larger full moon is so small, however, that even he cannot easily tell the difference just from looking at the sky.

While the supermoon's size will be subtle, the eclipse will become quite interesting once it reaches the first umbral contact with the moon. The penumbral or lighter eclipse introduces subtle shading, but the umbra, Espenak said, will "look like the Cookie Monster has taken a chunk" out of the moon.

Still looking for an innovative solution to manage your future events? Look no further. Events.com is here to help.

"One doesn't really see the color until you're getting close to totality," he said. The Blood Moon, he added, should be very easy to spot within minutes of totality, although that will depend on the lighting and atmospheric conditions in your region.

"In dark locations, its easier to detect subtle colors and features," he said. "Sharp eyed observers will notice that the part of the moon that's deep in the shadow, they'll be able to see some color to it in the last five to 10 minutes of the partial phases as we approach totality."

The Blood Moon, however, may not look exactly red. "That ranges from bright orange, to fire truck red, to a dark brownish color, to almost invisible dark brown gray," Espenak said. "Most of the time, though, it's orange to red, and that's because of the colors caused by the sunlight filtering through the Earth's atmosphere."

Editor's Note: If you snap an amazing lunar eclipse photo (or your own eclipse webcast) and would like to share it with Space.com's readers, send your photo(s), comments, and your name and location to spacephotos@space.com. 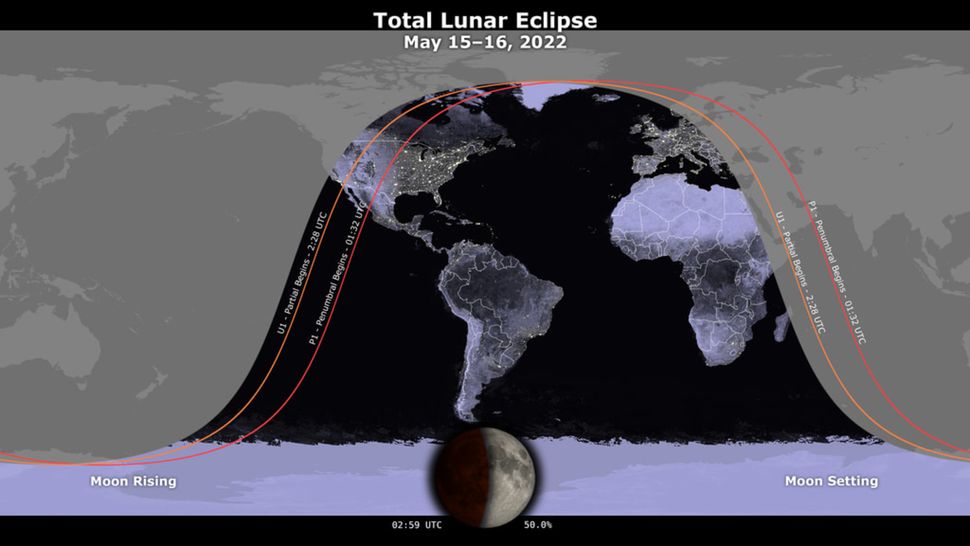 Since 2+2 = 3, and we can have 120 “genders” in a graduate level thesis, I propose the earth should be allowed to a “trans moon”, some days preferring to be called a moon, and other days deciding it would rather not be called “mother earf”, but rather “papa earf” or “mother moon”, or any one of 120 “earf genders”

So really, the moon could actually be the “earf”, and what we just thought was the “earf’s” “earf” could be the “earf”.

I tell ya, with higher gas prices, higher food prices, war and Biden/Harris it already feels like I see a bad moon rising. /CCR