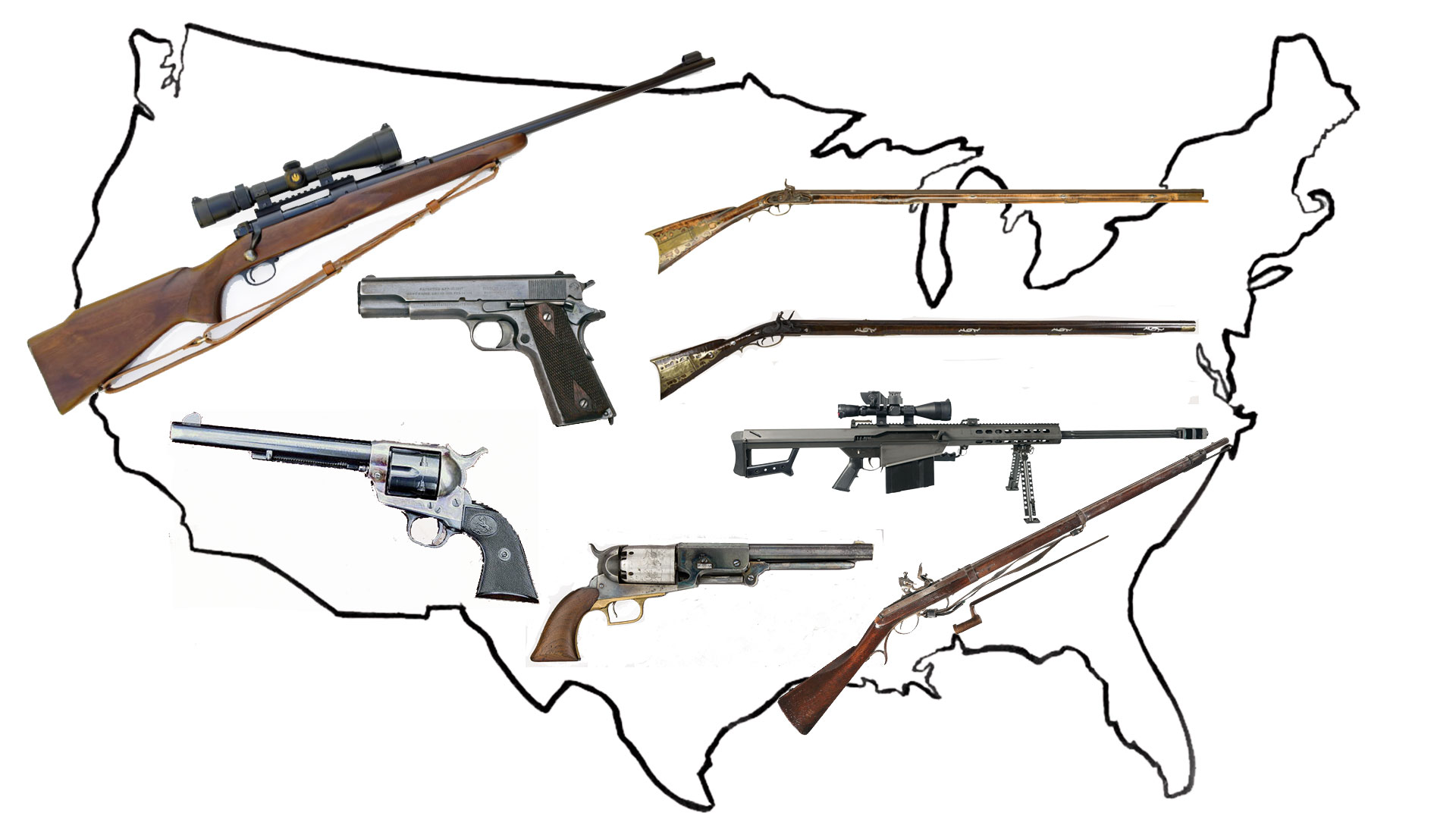 Utah’s state flower is the Sego lily; the state animal is the Rocky Mountain Elk, and "Utah ... This Is the Place" is the state song. However, did you know that it also has a state gun? In fact, nine states have official firearms that represent their home of the free!

Considered the “rifleman’s rifle,” women and men of the Alaskan bush carried the Model 70 through untamed wilderness and used it to establish themselves from the 30s through the 60s. Governor Sean Parnell signed Senate Bill No. 175 on July 30, 2014, making this classic American sportsman’s rifle the official gun of Alaska. 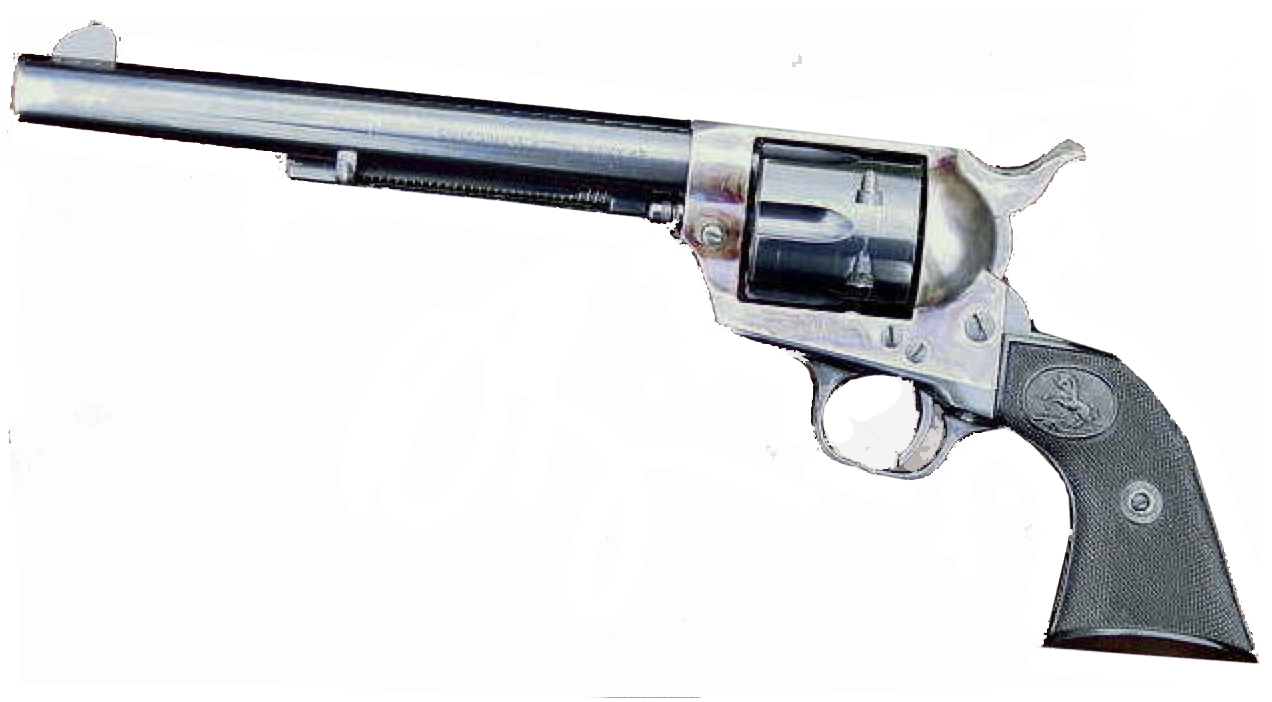 One of the most famous Old West guns, the Colt was first manufactured in 1873 and is still produced to this day. Although the Colt Single Action Army revolver was extremely popular in the Wild West, used by lawmen, the military and outlaws alike, it’s still competing with the Winchester Rifle Model 1873 for the title of “The Gun That Won the West.” In April of 2011, Governor Jan Brewer signed Senate Bill 1610 dubbing the Single Action Army Arizona’s state firearm.

The Grouseland rifle was made between 1803 and 1812 by Colonel John Small. He later became Indiana’s first sheriff. “This rifle and its maker are both integral parts of Indiana history, and as such, the rifle is worthy of its designation as the Indiana State Rifle,” said Senator John Waterman. It was inducted as the state’s official rifle in 2012.

While the Kentucky Long Rifle was actually made in Pennsylvania, legendary frontiersman Daniel Boone took his Pennsylvania Long Rifle with him to Kentucky. Boone forged a path through Kentucky in 1775 that would later lead to the state’s first permanent settlement. Daniel Boone’s legacy in Kentucky history spurred his rifle to be named the state firearm in 2013. 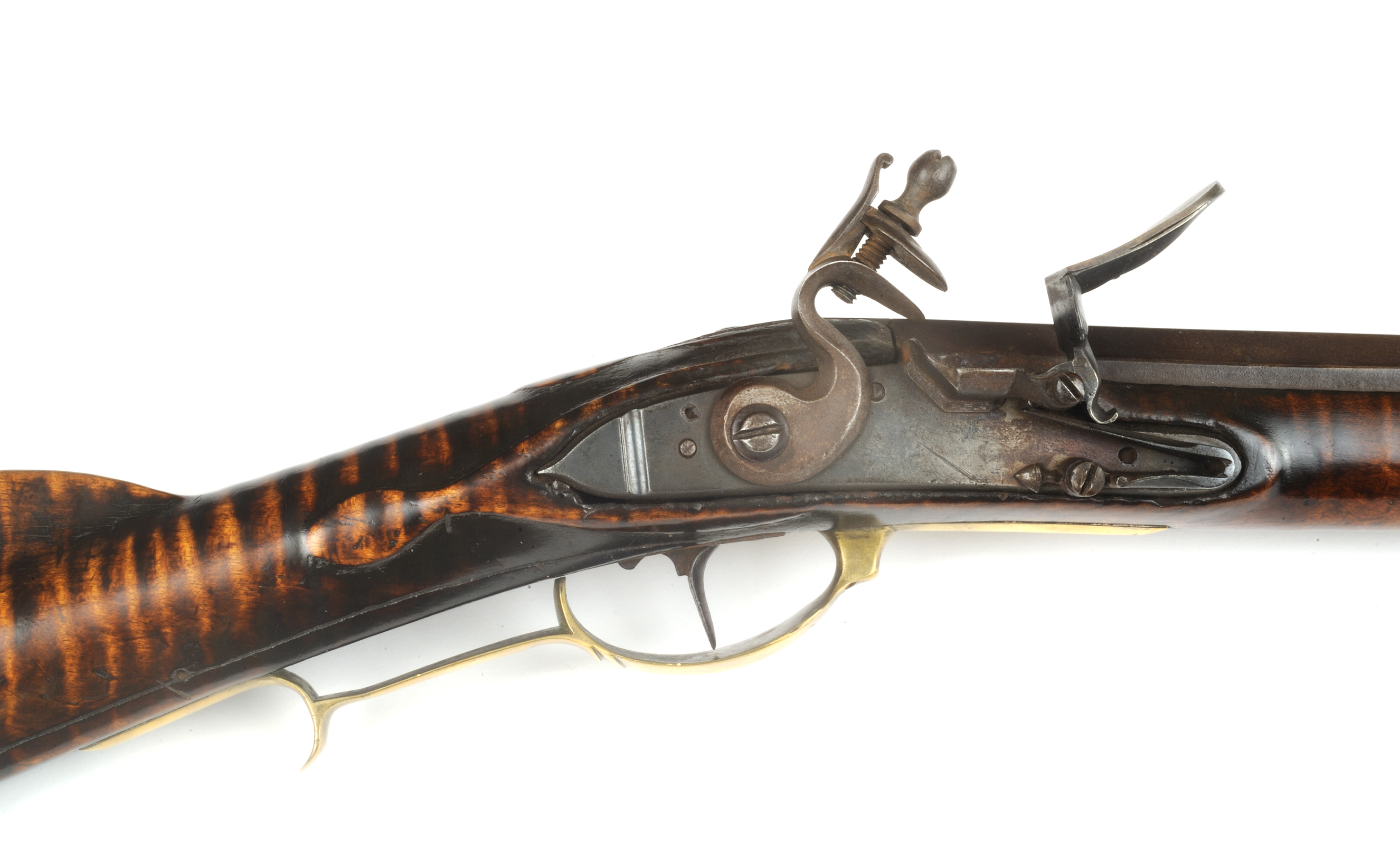 The Pennsylvania Long Rifle was more than just Daniel Boone’s gun, it was the first widely used American rifle for hunting and war. Although it was first developed in Pennsylvania, the long rifle symbolizes all of frontier America. It features an uncharacteristically long barrel for the time and and a rifled barrel instead of a smoothbore musket. It was designated as Pennsylvania’s official firearm in 2014.

Tennessee native Ronnie Barrett, now an NRA Board member and president of Barrett Firearms, built the prototype for the M82/M107 in a one-bay garage with a tool-and-die maker. The design for this shoulder-fired semi-automatic .50-cal. rifle was considered impossible at the time. In 2010 Barrett was honored with the NRA Publications Golden Bullseye Pioneer Award. A U.S. Marine who fired the gun in combat initiated the recognition of this rifle as Tennessee’s state firearm in 2016.

Texas Governor Greg Abbott signed a resolution in 2021 naming the 1847 Colt Walker pistol the official handgun of Texas. The pistol was designed by Captain Samuel Walker of the Texas Rangers and used during the Mexican-American War from 1846-1848. Walker partnered with Samuel Colt to design and manufacture the pistol. Apparently, it was so large and heavy that Colt supposedly said, “It would take a Texan to shoot it.” 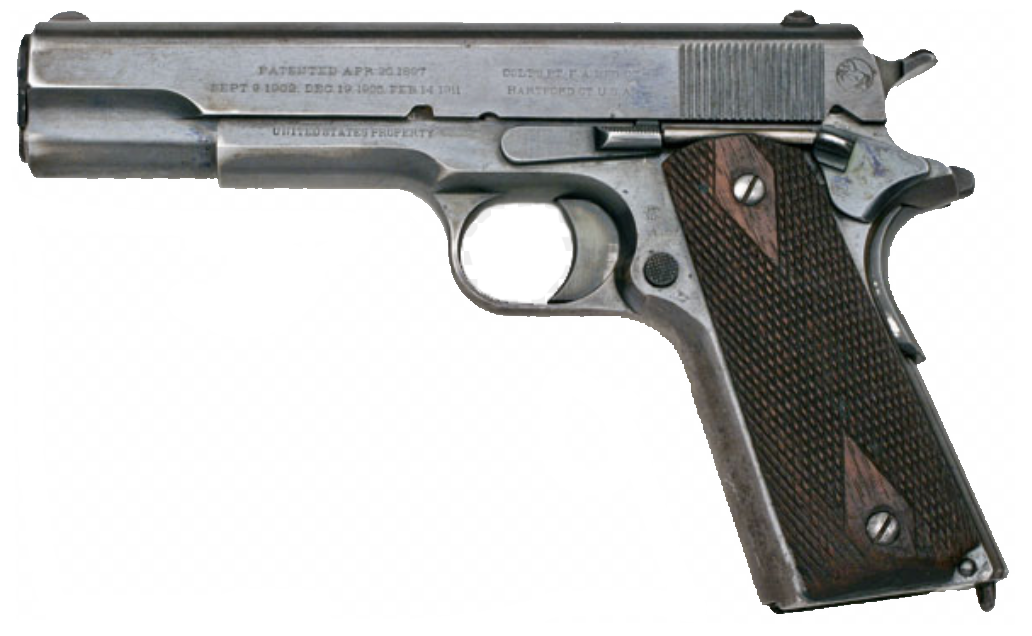 In honor of the M1911’s 100th birthday in 2011, Governor Gary Herbert named the pistol Utah’s state firearm. The gun is manufactured in Ogden, Utah, where Browning once lived, and represents a large part of both Utah and American history. It was first adopted by the U.S. Army in March 1911, hence the "1911" destination. The pistol was first tested in the field by the military in 1916 during the pursuit through Mexico for Francisco “Pancho” Villa.

The Hall rifle was first produced in Harper’s Ferry, West Virginia, by John H. Hall. The military adopted the Model 1819 in 1819, and it became one of the standard rifles used during the Civil War. This piece of West Virginia history was named the state’s official firearm in 2013. Utah may have started the trend of adopting official state firearms, but it’s a great way to capture American history and celebrate how firearms have made this country what it is today! If your state isn’t on this list, what do you think your state firearm should be? Let us know on Instagram, Facebook and Twitter (@nrawomen). TOPICS: AMERICA - The Right Way!!; Chit/Chat; Miscellaneous
KEYWORDS: banglist; firearms; rkba Navigation: use the links below to view more comments.
first 1-20, 21-34 next last
1 posted on 12/30/2021 4:05:12 AM PST by COBOL2Java
[ Post Reply | Private Reply | View Replies]
To: COBOL2Java
California also has an official gun: 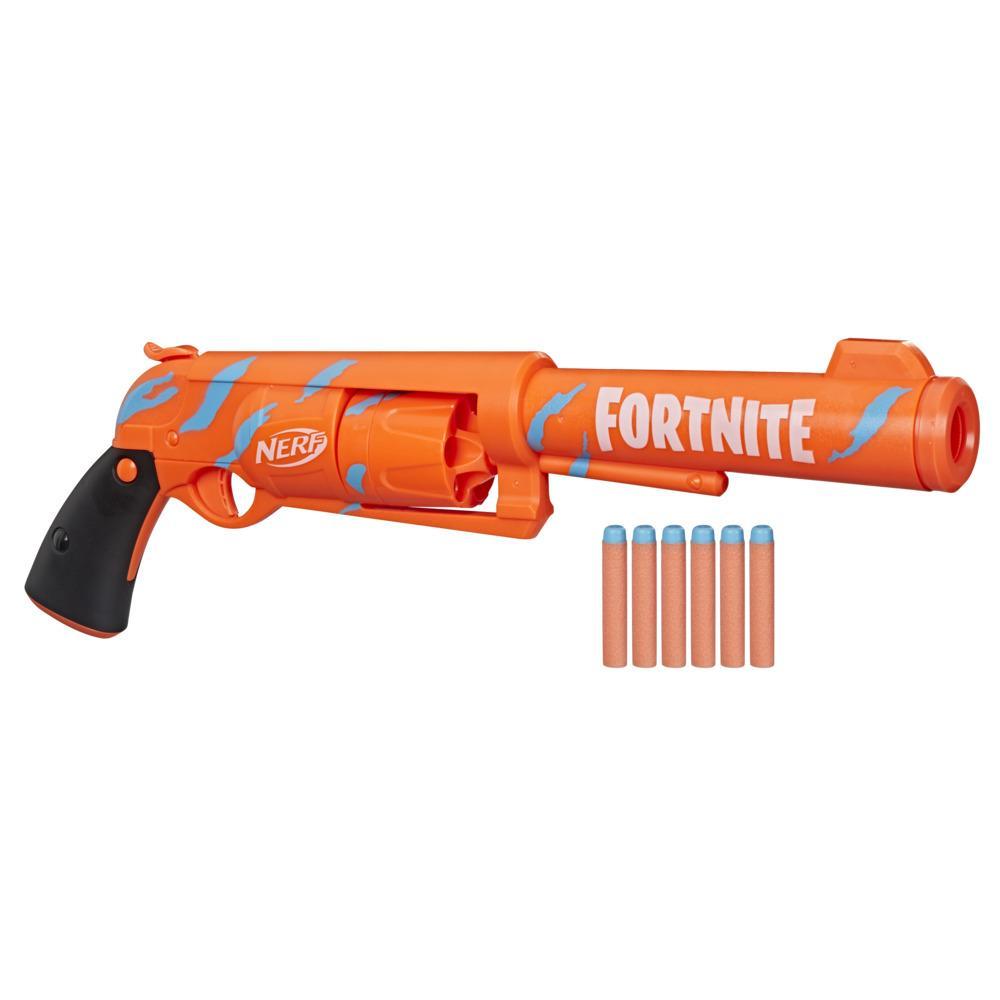 They thought about making it the Super Soaker, but, you know, water restrictions.

It is ‘very meet and right’ (liturgical) that one of these honor John Moses Browning, the genius behind so very many iconic firearms. The M1911 is and, in my opinion, will ever be a ‘form-factor’ for semi-auto handguns.

Ironic, isn’t it, that everything Bin Laden said about the US Federal Government being a corrupt, festering criminal enterprise turns out to be true?

North Dakota would have one, but the Chamber of Commerce there won’t permit Governor Noem to support it.

How much trouble and expense for an Indiana resident to obtain one of those? Asking for a friend.

I don’t know if you could call the Hall rifle a “standard” of the Civil War. Yes, some were used, but it was older, the breech leaked, and in terms of numbers, didn’t come close to the number of Springfield’s and Enfields and other types.

I think the walker colt was the one Eastwood had in josey wales.

I’ve been to the John M. Browning museum here in Ogden many times. It’s chock-full of the rifles, pistols, shotguns and machine guns he designed, with many being early prototypes.

The man was clearly the most successful and prolific firearms designer in history.

Gus in “Lonesome Dove”
had a WALKER.

“North Dakota would have one, but the Chamber of Commerce there won’t permit Governor Noem to support it.”

Kristy Noem is the Governor of South Dakota.

Doug Burgum is the Governor of North Dakota.

Sure, but how does that relate to this thread?

Daa, I knew that. And didn’t mean to insult you guys by my posting.

North Dakota would have one, but the Chamber of Commerce there won’t permit Governor Noem to support it.

There’s definitely a bit of a mix up here. I leave it to you to figure it out. Unless of course you are having a thought I haven’t thought of.

One point I might make at this point. Governor Noem and the Chamber of Commerce are usually on the same side of any issue.

A point that should cause some reflection among those who think her a Governor to cherish. 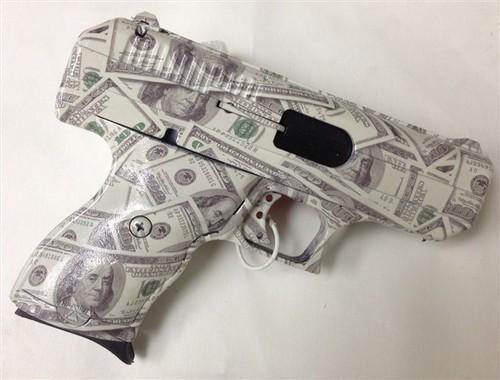 There’s some clown here (not you) who defends every insult that Noem throws at conservatives, by attacking people on this forum for getting upset by her. So, all’s fair in love and war!

As to my stupid mistake, a guy from ND corrected me, I guess he didn’t want his state tarnished (understandably).